Incoming from a correspondent – a photograph which includes a lighthouse. 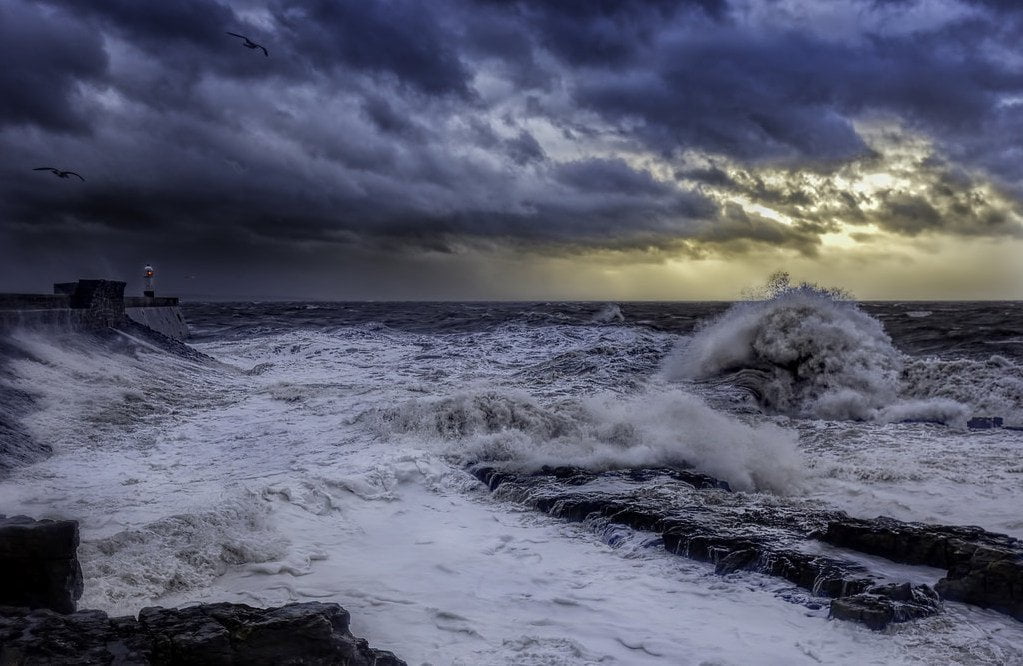 Regular readers will know that I’m a sucker for a photograph which includes a lighthouse, and this is no exception. I’m told that this is Porthcawl in the midst of a 2015 winter storm. Whether that’s correct or not (looking at images having googled ‘Porthcawl’ would suggest that it is), it’s an amazing picture.

While all the focus is drawn to the dramatic, angrily competing seas centre stage, the nearly insignificant red light of the lighthouse plays a wonderful cameo on the left.

Here’s a wonderful photograph of Dinorwic Quarry in North Wales, where they used to quarry slate, and which is now home to the Welsh National Slate Museum (no, I had no idea either). 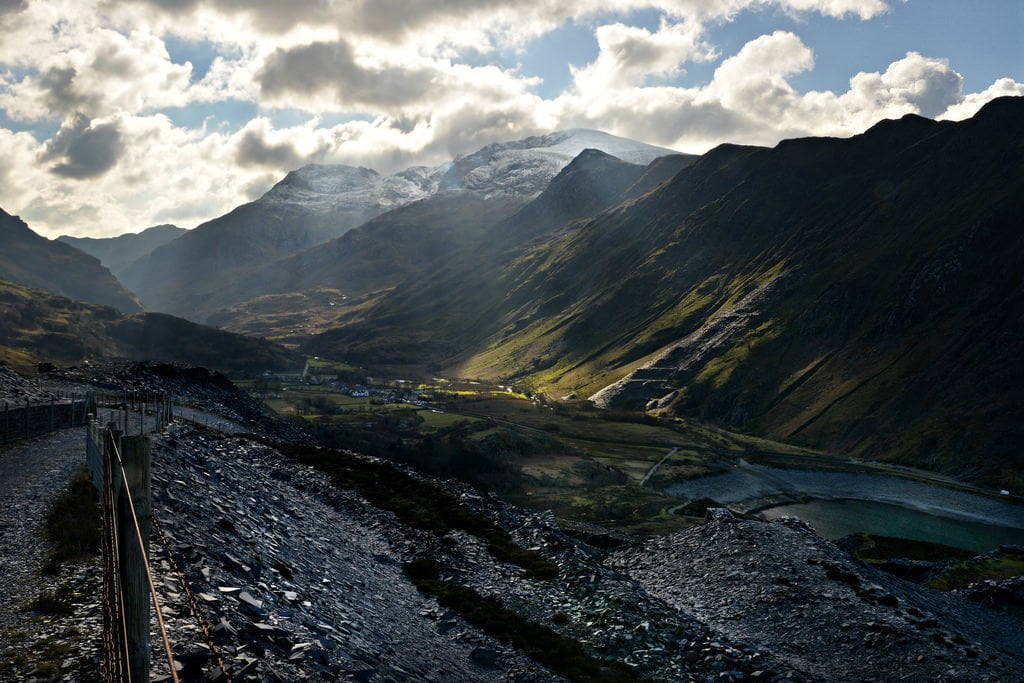 There’s much to see here. We’ve got slate (unsurprisingly), we’ve got water, a valley, shafts of sunshine on steep green hills with snow-capped peaks in the clouds in the background. That’s an awful lot of boxes to tick in one single image, but despite that, it’s not contrived in any way. It looks almost magical. And that’s not bad for an ex-industrial site in North Wales.

It’s even better bigger and on black.

I spotted this image over the weekend and it was duly Pocketed for blogging. Because it’s incredible.

I believe that it shows a USAF F-15 aircraft doing low level flight training – I think – in Wales (although there’s some suggestion it may be the Lake District in Cumbria, England). 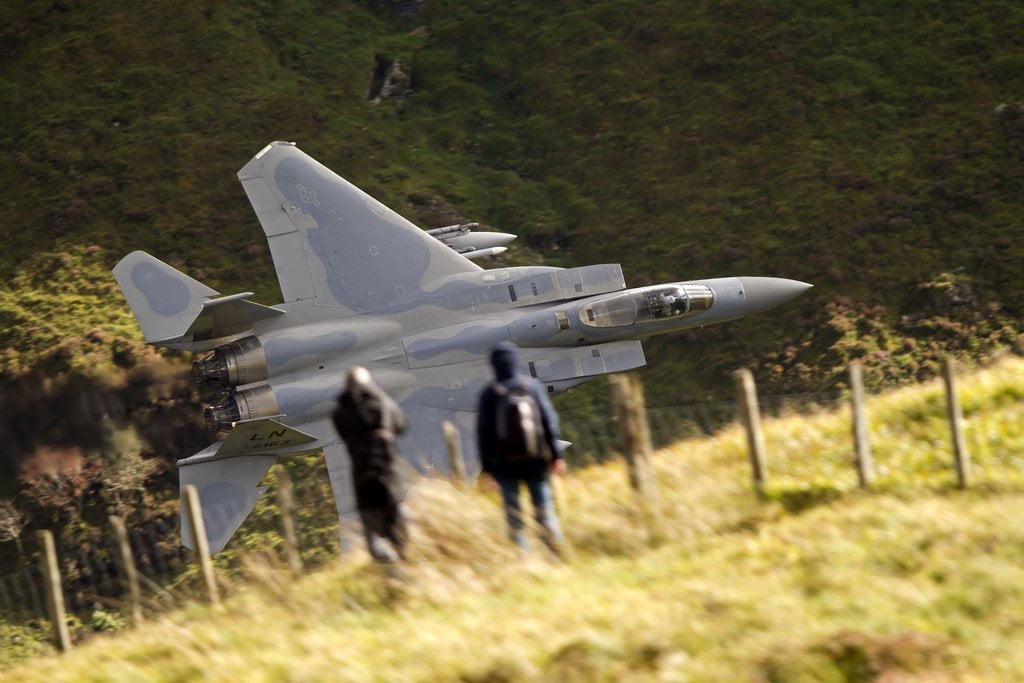 Shots like this are obviously incredibly difficult to take as the aerial vehicle in question is going quite fast. For most, just getting the plane in shot would be achievement enough, so this shot with the people in the foreground gives it depth and perspective. It’s simply amazing.

But the skill of the photographer is matched, if not bettered by the skill of the pilot. To take a 20 metre long plane with a wingspan of 13m and a top speed (at low altitude) of Mach 1.2 or 1,450 kph (Mach 2.5 or 2,665kph at high altitude) through the valleys of the Welsh countryside takes some ability. And some beeg balls.

Here’s a pilot’s eye view of a Typhoon doing the same thing.

250 feet is 76 metres. About half the height of the Portside Tower in Cape Town. Wibble.

I remember family holidays to the Lake District being punctuated by the RAF Tornados doing this same sort of training, and was amazed to learn that most of the planes we saw (and heard) there had flown up from RAF Coningsby, some 300+km away.

Still, with the same sort of speed as the F-15, I guess that as a Tornado or Typhoon pilot, you can pretty much choose wherever you want to play and then be there fairly promptly.

A wind turbine that cost the Welsh government £48,000 to buy has been generating an average of just £5 worth of electricity per month.
The turbine has been at its Aberystwyth office since it was built in 2009. It was one of several features that contributed to the building being rated “excellent” in an independent assessment of its sustainability.

But amazingly, the Welsh Government have defended the turbine’s performance, indicating that a mechanical error meant that it was only operating at 26% of its capacity:

Some improvements have been made and as of January this year it has been operating at 68%. But if it continues to operate at 68% capacity then it will generate 55.25 kWh per month – electricity with a value of £8.84.

Oh, well that’s SO MUCH better.

At that rate it would take around 452 years to offset the cost of buying and installing the turbine.

Apparently, the true issue lies in the siting of the turbine, away from clean air flows and… well… wind. And apparently, the Welsh Government were warned of this before the turbine was installed. But they went ahead anyway, probably on the grounds that:

1. It looks trendy.
2. It got their building a better green rating, and
3. It wasn’t their money that they were spending.

UPDATE: Maybe it got up to a tenner given the weekend’s weather:

A clean-up operation is under way after huge waves damaged Aberystwyth seafront and dumped shingle on the promenade during the weekend’s storms.
Local photographer Keith Morris said the scene resembled a war zone on Sunday morning with some seafront businesses hit by flooding.

Wales battled winds of 89mph (143kph) at the storm’s height on Saturday.
Gusts brought down trees and power lines leaving 10,000 properties across south and west Wales without power.

“I have not seen a storm as big as that for decades in Aberystwyth,” said Mr Morris. “There were big granite blocks lifted feet into the air. It did look a bit like a war zone on Sunday morning.”

(If it’s still standing, that is.)