We did Corona and Monkeypox and Salmonella and Polio the other day, but I bet that no-one had “imported case of Lassa Fever” on their microbiological bingo card, did they?

Synopsis: Man falls ill in Nigeria, gets treatment, remains ill so flies to South Africa to get better treatment(!), ends up in hospital in KZN, sadly throws a seven.

Now 50 contacts are being traced and monitored, just in case. Nothing yet, so right now, it looks like we may have dodged a very nasty bullet.

Since Covid, it seems that the media and the public have been much more aware of viruses, microbiology and outbreaks and such – for better and for worse (everyone on social media is an expert) – Monkeypox is a good example. But this one has been in the NICD media releases for a while, and it doesn’t look like it was given much attention by anyone. That’s odd in the current climate, but it’s also quite welcome.

Top Tip: Never read The Independent for political news, thinking that it will give you a fair, balanced viewpoint. The name is merely designed to fool you into thinking that way.

The tagline for The Independent used to be:

…suggesting that The Independent was actually independent and additionally offering that up as some sort of virtue, like there was some problem with holding an opinion on any given matter of the day.

Anyway, it turns out that The Independent really isn’t very independent at all.

But this isn’t post about The Independent. I just thought I’d add a bit of unnecessary context because I’m looking at a story from that outlet in this post.

It’s this story (and it’s not very political, so I think we’re ok to run with it):

This is very much in the same vein as the post I wrote a couple of days ago detailing a similar issue in the USA.

The thing is, the USA post I did compared the numbers of deaths from Covid-19 this year (because it’s new) and those from influenza over the last five flu seasons over there. Covid-19 was much, much worse than flu, despite comparing the figures from when flu was at its height over there.

But yes, flu is very seasonal, and so there’s no real surprise that if you look at the figures between January and August (which they have done here) then the numbers for Covid are so much higher: most of that time wasn’t flu season in the UK.

Deaths linked to Covid-19 were higher than deaths due to influenza and pneumonia between March and June.

And yes, they’ve added in “pneumonia” as well, but again, that isn’t as prevalent during the summer months.

It’s not a fair or meaningful comparison.

Still, it still doesn’t make for pleasant reading because the real story is probably yet to come.

As winter – and flu season – approaches, if we see what we have seen in the Southern hemisphere, then influenza will be less of an issue this year (because more people will choose to get vaccinated this time around and because of measures in place to try to combat coronavirus will limit influenza transmission as well) and that’s a good thing, but coronavirus will almost certainly continue to knock people off.

And so, with coronavirus cases already increasing again, it seems likely that Covid-19 will likely still be far more deadly than flu in the UK, even when the playing field is levelled.

Day 67 (as some beagle-eyed readers noted) was a bit of a non-event.

Thanks to some sterling and much-appreciated detective work by The Guru, it has been determined that the Jetpack plugin (the very one that informed me that the blog was down) was actually the one which was breaking it.

Having re-installed it, it’s still behaving somewhat errantly, but now I know where to look if/when things go wrong, I think I can sort it out much more quickly than previously.

And there ends the technical stuff.

And thus, today marks a return to several things: the usual dross on the blog, school for some students (after the confusion over the weekend), the traditional South African sport of drinking and driving now that we’re (legally) allowed to buy alcohol again, and – for some morons – the idea that socialising is fine without taking any precautions.

The number of social media posts I saw yesterday with friends meeting up again for the first time in n weeks and then sitting right next to each other with no face masks in sight was… let’s say:”concerning”. But in reality the actual virus has almost completely slipped from the news headlines with the riots in the US and the new-found joy of buying beer taking its place.

And yet we find ourselves continuing on a very steep upward trajectory right now.

But it’s only going to get worse in the very near future. And I’m including all 4 provinces displayed here in that prediction. Just look at those telltale little upticks on the red lines, especially in the EC and Gauteng.

To be honest, since our progression to Level 3 was announced on the 13th and since Cyril decided that churches were fine to recongregate , the lockdown had become something of a sham for a lot of people anyway. Sadly, those events coincided neatly with the Western Cape case numbers moving into overdrive and they really haven’t helped at all in limiting the spread of the virus. (And let’s be honest, the situation is much worse than the numbers here indicate: there are plenty of people who have the virus who simply aren’t being tested because there simply aren’t enough tests available.)

We have to get over the hurdle of thinking that wearing masks when near family or friends implies that either we or they are ‘dirty’. The fact is that the virus isn’t discriminatory: it will infect anyone, and anyone can then transmit it to anyone else. We need to recognise that and we need to wear masks to protect everyone – not just ourselves, but also our friends and families and our communities.

To go and meet up with your mates in a park, at their house or wherever and to not socially-distance or cover your face right now is maybe mildly foolhardy in the UK, is tempting fate in SA and is downright dangerous and selfish in the Western Cape.

There’s plenty of it still happening though.

Sadly, I feel that it’s going to take people being personally affected by Covid-19 before that message starts to get through.
And – equally sadly – that’s very likely to happen, given the current local behaviour and attitudes.

We (humans) are not the only ones in South Africa struggling with a virus problem.

There are now outbreaks of African Swine Fever in three provinces: Eastern Cape, the Free State and Mpumalanga. And so the Department of Agriculture, Land Reform and Rural Development (broad portfolio, bru) are advising that pigs are subjected to some of the same restrictions as humans to avoid the further spread of the virus: 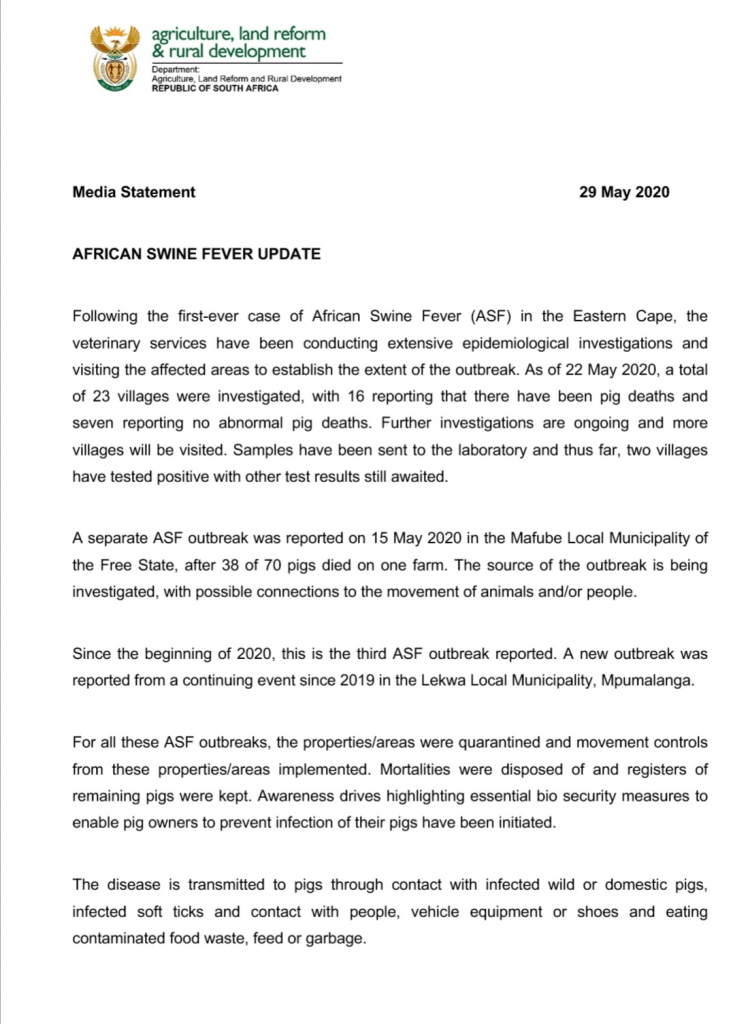 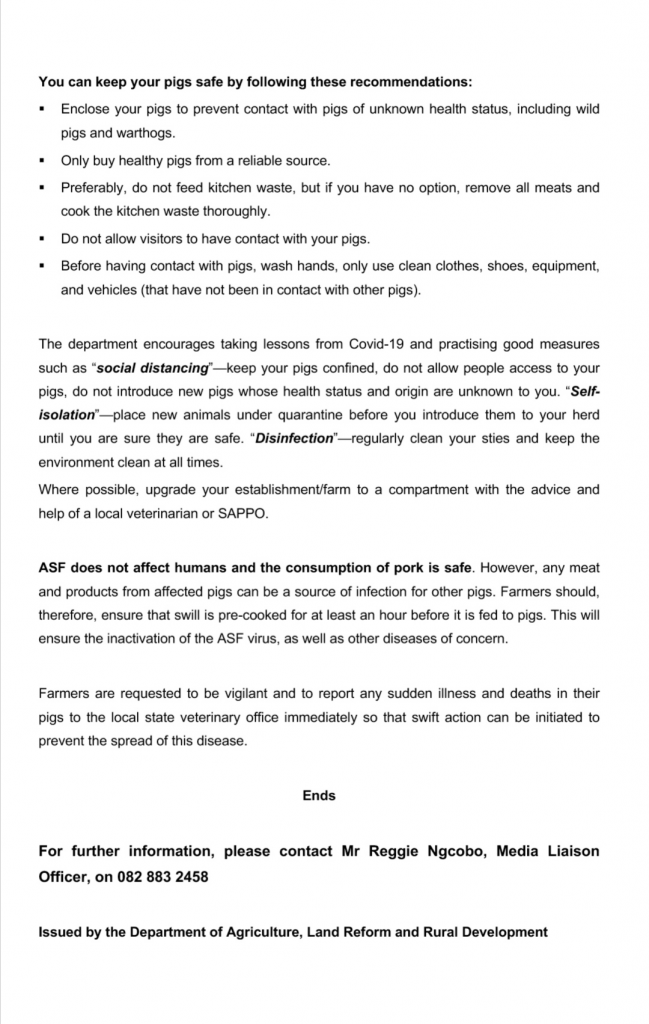 There you have it.

Socially distance and self-isolate your pigs. Disinfect their surroundings regularly.

Keep them off beaches and out of National Parks. Ensure they wash their trotters for at least 30 seconds at a time. Don’t (or do) (or don’t) allow them to go back to school. Cook their food thoroughly.

Ensure they wear a mask and only exercise between 6-9am. Quarantine them where necessary. Only allow them to buy alcohol on Level 3. Keep them away from warthogs.

Do not get them wet or feed them after midnight.

Right. I think that covers everything. Bring on the next viral pandemic.

Apparently, there’s a nasty bug going around Cape Town’s Southern Suburbs at the moment and that nasty bug is Influenza A virus subtype H1N1.

Sadly, my daughter has succumbed and is girl down. It’s been four days now and she’s only starting to mend. I think there’s a nice bacterial bronchitis taking hold now.

It’s not fun seeing your kids struck down like this, so my advice to you would be to try to avoid letting your kids get Influenza A virus subtype H1N1.

And while the Northern hemisphere flu vaccine included cover for H1N1, our local version… didn’t.

Thus, the only way to effectively protect your children is to hermetically seal them in a plastic bag. However, I have been informed that this may also be detrimental to their health, so maybe don’t try that.

Lucozade, rest, nurofen and – from today –  some azithromycin.

We’ll get her mended.