Good news for Cape Town and the surrounding area is that we will apparently soon be able to visualise wildfires on Google Maps. Just like traffic, terrain and satellite have their own map layers, starting this week, the rollout of a “fire” layer will begin.

Wildfire boundaries should be updated on an hourly basis, and Google says you’ll be able to tap on a fire to see information from local governments, like “emergency websites, phone numbers for help and information, and evacuation details. When available, you can also see important details about the fire, such as its containment, how many acres have burned, and when all this information was last reported.”

That additional level of detailed information will begin in Australia and the US, but as a city which suffers from veldfires every single year, Cape Town will surely not be far behind. At which point, this feature turns into a service and actually becomes interesting and useful, as opposed to just interesting.

I was heading back up towards the homestead from the magnificence of the Claremont CBD with the boy yesterday evening when we spotted some smoke (lots of smoke) billowing up from somewhere local. Well, we could have gone straight home, or we could have gone fire-chasing.

Since this had been a quick trip down to a local fitness centre, mostly populated by children, I hadn’t brought my camera with me. It’s just not the done thing. But that was a bit of a drawback when we inadvertently went fire-chasing. Still, I think my phone did ok, all things considered. 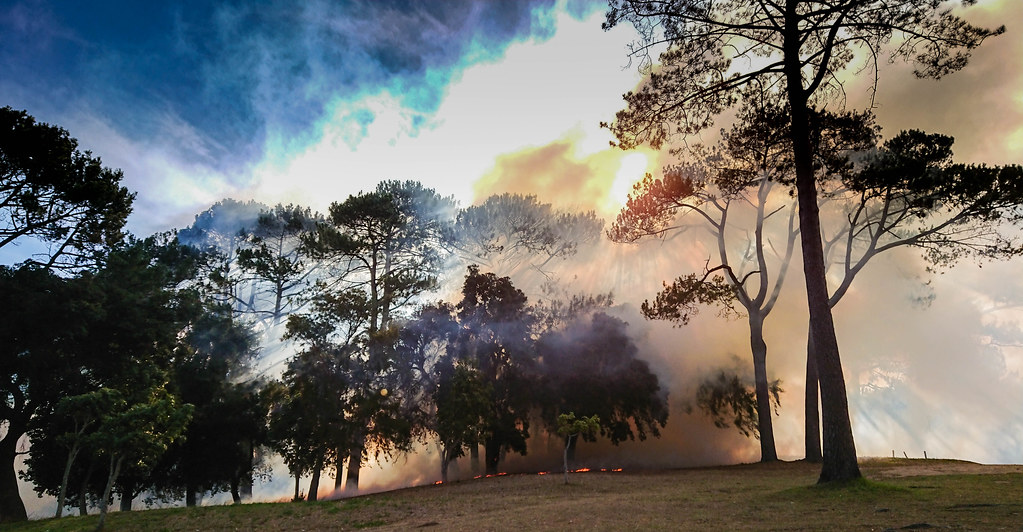 The fire was in Trovato Park, just above where the M3 goes over the top of Edinburgh Drive. There’s quite a population of homeless folk that live there, and the fire crews present were certainly of a mind that they were the cause of the blaze. It had taken on the dry grass and pine needles very quickly, and had leapt up the trunks of at least three of the trees in the park.

That said, it wasn’t much of a blaze and was already under control when we got there. The smoke was more of an “all mouth and no trousers” affair, although with the sun heading down over the mountain, it did allow for some nice shots through the trees, and prime Instagram fodder.

You can see my mini set of 9 very similar images* here.

* because of the nature of what I was ‘togging, it was rather difficult to get any other angles. I would have got burny feet syndrome.

A large veldfire in Rondevlei Nature Reserve this evening made for a superb sunset over Cape Town. 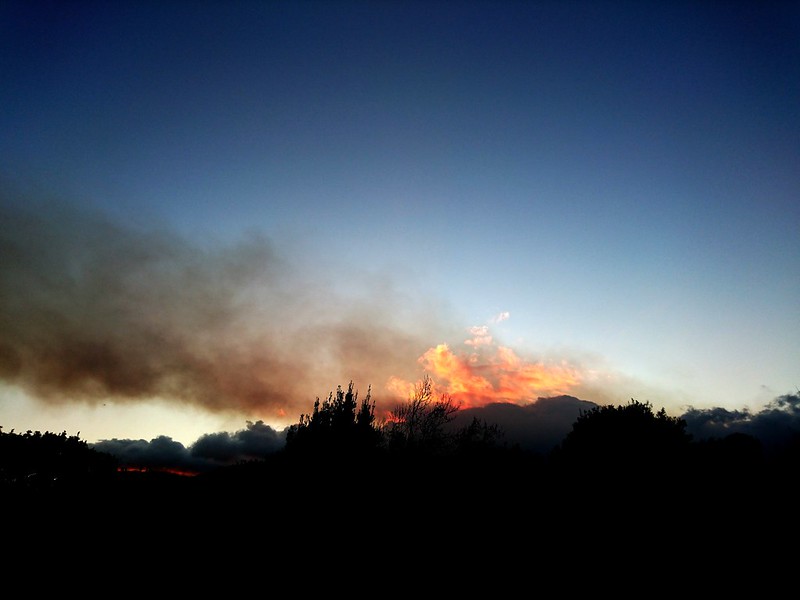 In this hastily-snapped phone pic from our bedroom window, you’d be forgiven for thinking you were looking at the fire itself. But no. That smoke is coming in from the left of shot, and all the orange you see is setting sun.

We left the firefighters to their valuable work and headed off for a very decent meal at The Avenue, which, once again, comprehensively failed to disappoint.