Twice. And neither of them with the result that I would have liked, but… that’s life, I guess.

United finally got their season underway at Watford last night, and were unlucky to lose. The performance was OK, but there were a few last minute injuries and admin things that meant that we couldn’t get our strongest – and more importantly, most balanced – side onto the field. One goal settled an ugly game, and now we move onto our second of six games in less than 19 days… Ridiculous.

And then tonight… I finally played football again. GET IN THERE!

Just over a year after Covid flattened me, it was great to get back onto the field again. And I was so touched that the guys gave me a guard of honour just before the game started…

Did they, bollocks. Lol!

But despite the result, I really enjoyed playing again, Honestly, it was something that I really didn’t know I would ever be able to get back to. But my biggest issue tonight (aside from the scoreline) was that my smartwatch kept telling me that my heart rate was getting a bit high, and trying to SMS my wife.

I’ll be switching that option off ASAP.

And I’m feeling good. Might be a bit stiff tomorrow, but good stiff.
And I’ll be ready to go again next week: hopefully with a better outcome.

The big one for most people was the hilarious 4-0 drubbing of Manchester United by League 1’s MK Dons. As was noted by one astute individual – Louis van Gaal looked like he was about to cry:

And while it was funny, it was also sad that Shrewsbury’s win at Leicester was overlooked, and that West Ham’s home defeat to the mighty Red And White Wizzzzards of Sheffield United didn’t make more headlines. Yet another Premiership scalp after our amazing cup run last season,and, given that this was the first meeting of the teams since the infamous Tevezgate scandal, an especially nice one to take. 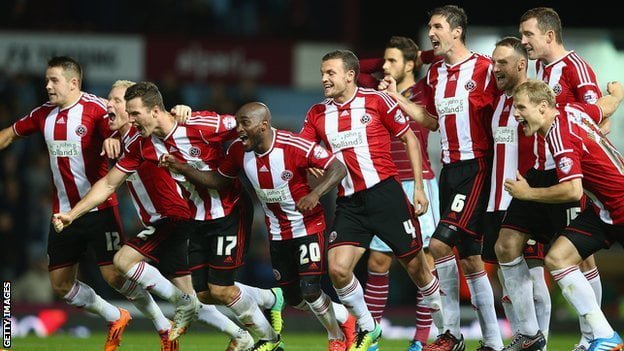 The Blades had to work hard for their win on penalties, but to take a young team down south to a Premiership ground, hold them for 120 minutes and then pop in five out of five penalties is no mean feat. No wonder Nigel was happy.

No real point to this blog post save to record this for posterity. And that has now been done.

(post title borrowed from The Streets’ track Has It Come To This? [youtube] which is also quite apt)

After the upset of Saturday evening, it was heartening to read the first few paragraphs of this:

Instead, the team went to every corner of the ground, acknowledging the supporters who had stayed behind to sing ‘We love United’ and cheer them to the rafters.
As the team finally disappeared down the tunnel, the strains of Can’t Help Falling In Love by Elvis Presley drifted through the emptying stands like a sad mist. It was a very special moment indeed.

Which confirms what I said here and is in stark contrast to our neighbours across the city whose fans have never seen anything happen after the 85th minute, because they’ve gone home already. Pride and passion often seems limited to S2.

The rest of the article, however, makes for grim reading.

This week the board will go through the club’s budget, line by line. Nothing will be safe. The club’s highest earners — players such as Ched Evans, Darius Henderson, Richard Cresswell and Mark Yeates — will be moved on.
The owners have made positive noises about building a team around the youngsters who have got the team to the FA Youth Cup final this month, but the truth of the matter is that if a decent price can be found for the likes of Jordan Slew and Harry Maguire, they will go too. These are bleak days indeed.

So we need some continuity.

One man who may be staying put is manager Micky Adams. Adams has two years left on his contract and it would cost the club around £500,000 to sack him, as well as the ignominy of having to appoint a fifth manager in the space of a year.
If he stays, Adams will be forced to build a promotion-winning side virtually from scraps, but it was a challenge he was prepared to take on.

“I’ve had a history of taking football clubs to a higher division,” he said. “I’m determined to resurrect our fortunes. But it won’t be my decision. Those types of discussions are not for the public at the moment.”

It is hard not to sympathise with United’s plight, especially when you consider their wonderful fans, 10,000 of whom have already signed up for a 2011/12 season ticket.

“Keep the faith, keep coming,” Adams urged them. “There’ll be better times around the corner. Sometimes you have to take a step back to go forward.”

Look, while I agree with Micky’s sentiment, I cannot think of many situations in which it would be beneficial to take a step back to go forward. This seems like a bit of a… well… backward step to me. No gold medal has ever been won by the Olympic athlete who took a step back at the starting pistol before heading off down the (now) 101m track, has it?
Management speak like this is utter BS. The Blades are in a horrible situation and they don’t need to “make the best of it”, they need to accept that this is where they find themselves and start fighting to get back up right from the first whistle of the new season.