I’ve just read this heartfelt post on Isle of Man TT rider Dan Kneen, who was killed during a practice lap of the Mountain Course earlier this week.

It’s deeply personal, written from the perspective of a comrade, but also from an individual who clearly understands the mentality and determination of the riders and the rush of the TT – and all the glory, adrenaline, drama, camaraderie and emotions that go along with it.

We’ve had three solid evenings of practice without any real drama. The whole island seemed to be on a high – the weather, the racing and not forgetting the astonishing 133mph lap Dean Harrison set!

…but now we’re not talking about the highs. The mainstream media such as the BBC, The Independent, etc. were never talking about that. Oh, no. They’ve been waiting for this like they do every year. A red flag. A fatality. ‘Ban the Isle of Man TT’ brigade will be out tonight… and it really isn’t the time or place.

And it’s true. A quick google search will show you that every news outlet and internet site going, has – at some point or points – asked the question as to whether the TT should be allowed to continue.
Even the readers of Golf Monthly think their opinion matters.

Fortunately, the Isle of Man is not being swayed – at least not yet. And nor should they be. The riders know the dangers, and they make the decision to race or not.

Perspective. Perspective is everything. Racers aren’t forced to race these roads. They know that this sport in particular is dangerous. So do their families. It’s no secret. There’s furniture. Trees, stone walls, curbs. The more forgiving hedge and the less forgiving lamppost. These racers jump on a motorcycle and lean over a flammable tank full of fuel because it’s what they enjoy, it’s their dream, it’s their life!

For some though (and here, I’m looking at the likes of Golf Monthly readers), this won’t be enough. Their sheltered existence upon the dreary, dog-legged commuter belt fairways of Surrey surely won’t allow them to acknowledge that the rush of riding the TT is sufficient reason for someone to exercise their free will and to voluntarily put themselves in harm’s way. The UK (of which the Isle of Man is not part) has banned everything from the overtly dangerous right through to the laughably harmless on the grounds of “risk”, and it’s become a hugely sterile place because of it.

Were there some press-ganging at play here; were orphans being dragged from their beds and forced to blast around 37+miles of winding country roads at more than 200mph on machines better suited for Donnington Park, Silverstone and Brands Hatch; were they lining the more dangerous bits of trackside wall with puppies… well, then I would agree that something needed to change.

But that’s not the case. And thus, when a fully grown adult chooses to ride the TT, fully aware of the dangers they are subjecting themselves to, I think you can take your risk-averse London ways and your fancy putters and back right off.

South Africa has the best word for this: Voetsek.

UPDATE: This morning’s follow up is also incredible writing.

I’ve never used Vimeo on-demand before. But at $4.99 for a rental, this from director Luke Huxham, looks worth a watch:

…promises to be one of the most beautiful and in-depth looks at one of the deadliest races in the world. An annual event that’s taken place for over a century, the TT is a complex road course that spans the majority of its namesake isle, where top-tier superbikes and their riders go all-out — often just inches away homes and people. On-board footage from motorcycles in the race can be terrifying enough to make you queasy.

There have been a number of attempts at making this sort of film before and none of them have really worked. The general suggestion is that this one will be a bit different. It comes out on June 26th.

To the best of my knowledge, there was “only” one rider death during this year’s TT – that was Frenchman Franck Petricola.

Last night, I ended up watching a whole evening-ful of minority sports, quite by accident. I’m not sure I could watch any of them for any longer period of time, but it was different enough to entertain me for a once off. In case you want to try something similar, here’s my guide to what I saw and what I thought.

You will need: Some red wine, a couch and some minority sports.

It started accidentally with the second half of some women’s World Cup hockey. New Zealand’s Black Sticks (you’d never get away with that here) versus hosts and world number one team in hitting a ball with an inverted walking stick, the Netherlands. Given that I was making bacon sandwiches before I started flicking through the channels, I missed the first half and with it, the only goals of the game. But it was fairly entertaining still, with New Zealand giving it a bit of a go and some exciting counter-attacking by the ladies in orange.
The rules are a bit difficult to work out if you are watching it for the first time and the commentators were – reasonably enough – assuming that the viewers had watched some hockey before. I have, but it was on ice and the players were bigger and wore more padding. So I was a little confused from time to time, but I gathered that the aim was either to score goals (obviously) or to hit the ball at your opponents’ legs (less obvious). If you manage the latter, you get a free hit of the ball, at which point you either to score a goal (obviously) or to hit the ball at your opponents’ legs (now more obvious).

Final score 2-0 to the Netherlands.

Over then (accidentally again) to the EFC fight between Cape Town’s Don “The Magic Man” Madge and Joburg’s Boyd “I’ve Got No Nickname” Allen. It was at the Grand West Arena and I’m guessing that Parow was completely empty last night.

Again, I don’t know a lot about EFCing, but apparently, this was a big fight and there were a number of EFCing people who were talking it up beforehand. Of course, they would do that. No self respecting sports channel sticks up soundbites of experts saying stuff like:

No mate – this is going to be rubbish. Save your time and go and do the washing up instead. Yeah, I know there’s a lot of it and the kitchen is freezing, but believe me, you’ll die of boredom if you sit down and watch this. Save yourself: go and soak that bacon pan.

Now, my experience is also that these things can be over-hyped in the extreme, but given that there was only the washing up to do and the kitchen was wholly unheated, I decided to sit through it.

The aim of EFCing is to hurt your opponent as much as possible, but you’re not allowed to hit a hockey ball into their legs. However, you can just hit them or kick them, or shoot them (can we check that last one is right before publishing, please? – Ed.).

The fight went the distance, amazingly, with one guy having a big cut on his head and the other nursing a bloodied nose (who knew?) and was then declared as a draw, which seemed fair enough. However, by all accounts, including the breathless and sycophantic wonderment of commentator Sias du Plessis, I feel that I may have inadvertently ruined my future watching of EFC by starting with the best fight ever. This tweet, from regular commenter, biobot, summed it up nicely:

I’m no MMA fanboy, but that was quite a fight btw Madge and Allen. #efc

I avoided the (heavily sponsored) post-event press conference and switched onto the Isle of Man TT Races.

My links with the Isle of Man mean that I usually watch the TT for the flashing glimpses of scenery, rather than the actual motorbike racing. And to be fair, while I have a passing interest in the zoomy bikes and the nutters who sit on them, this was pretty much the case this time around too. It’s a difficult thing to watch in any other way, given that the course is nearly 38 miles long and there are only so many cameras to go around, so a lot of the incident, such as it is, happens away from where you’re actually looking.

Technology though, is making a bit of a impact, as you can now stick smaller, better cameras in more places – namely on helicopters and on the actual bikes. The latter works better, as the bikes now go so fast that the helicopters can struggle to keep up with them. That said, there’s still an awful lot you (sometimes thankfully) don’t get to see, like the fatal accident of Sheffield rider Karl Harris during the race I was watching.

The commentary is great, with just enough information to let you know what’s going on, but not so much that it drowns out the noise of bikes. It’s presented with good humour by ex-riders too, so it’s down to earth, honest and insightful. And behind it all, there’s still the glorious Isle of Man scenery in HD. There’s more TT programming on Supersport tonight and over the weekend, so delve in and have a look at my beautiful island.

None of these things will ever come close to replacing football in my list of great sports I like to watch, but I actually enjoyed a quick trip outside my sporting comfort zone last night, and I’ll certainly be giving it a go again soon – I believe there’s some international egg-chasing this weekend, so I might give that a go.

Please say hello to my Auntie Hazel, all the way from the Isle of Man. 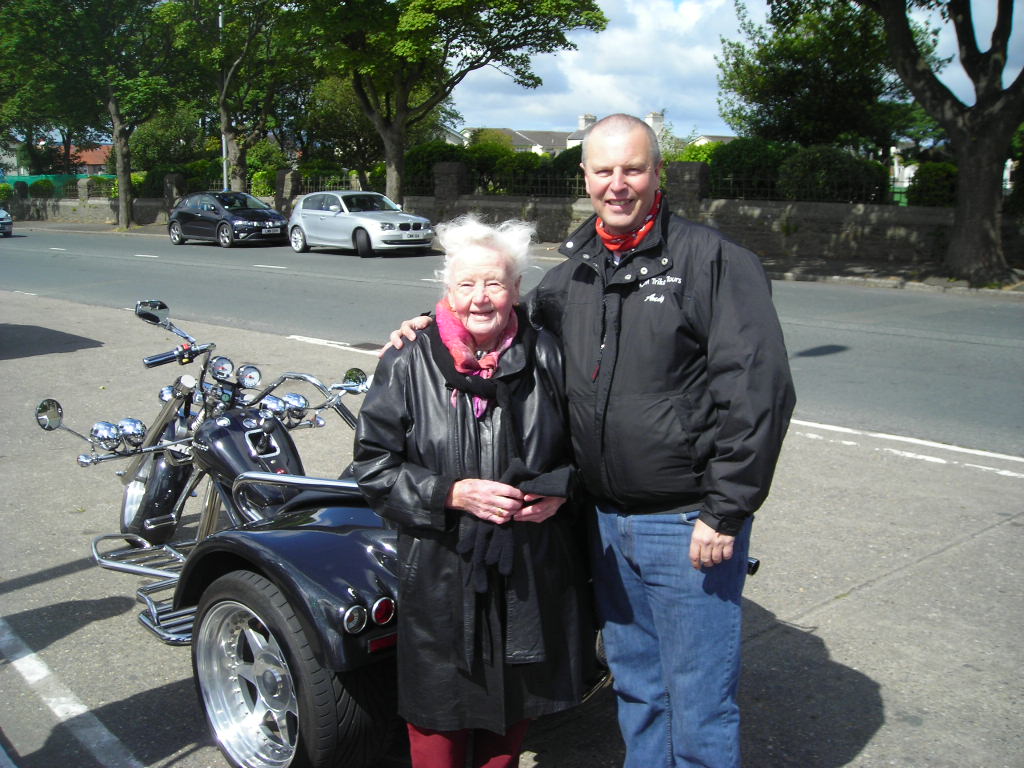 She’s just got off that trike behind her. And here’s the scoop from local radio station 3FM:

A local woman has been sharing her birthday with the Mountain course.
TT 2011 is the centenary of the Mountain Course. Hazel Dean yesterday reached a milestone of her own celebrating her 100th birthday.
As a special treat for the lifelong TT fan, her family arranged for her to go on a parade lap of the Mountain Course, on a trike.
3FM caught up her after a 37¾ mile trip, she said it was a wonderful birthday surprise.

Which was nice to read. What was even better was when I got to hear how she felt about it as well.

Thanks to Ben Sowrey and the guys at 3FM for the permission to use their stuffs.