That dot matrix sign never has any good news.
But then, look where it is.
What did you expect?

Nuclear disasters aren’t very amusing. Fortunately, they only happen very, very occasionally: so much so that you can probably only name the same Big Three that I can.

This story references a nuclear disaster that hasn’t happened yet. Indeed, there’s no evidence or suggestion that it ever will. And that’s why I feel that I’m allowed to find it a bit amusing.

First off, in the event of a nuclear accident at Koeberg (Koeberg being our local nuclear power station (the only one in Africa, nogal)), my first instinct would not be to head to the city centre anyway. Given that Koeberg is pretty much in the bottom corner of Africa, I would hesitate to head further into the bottom corner of Africa should there be any sort of radioactive leak.

That’s not where you want to be. Especially if it’s going to take you three hours to get there.

Additionally, should Koeberg go bang bang, residents in (Uns)Table View will surely not be the only ones anxious to vacate the general area. I reside in the much more gentile, verdant, pleasant surroundings of the Southern Suburbs, but in the unlikely event of Koeberg going off, I’m not going to hang around to see what happens next: I’m heading out of Cape Town along with everyone else. I’ll review the situation from the interminable queues in godforsaken Somerset West or something. I shouldn’t really have to say this, but Table View’s local traffic congestion is really just one small part of a much, much bigger problem if one or both of our local nuclear reactors happen to meltdown.

But then, why would you drive anyway?

Another resident, Cindy Welch, said it recently took her an hour to reach Table View High School, which is four kilometres away from her home, due to traffic congestion.

Four kilometres is entirely walkable. Or jogable. Or cyclable. Especially if the motorised alternative is going to take an hour. And even more so if there’s a big explodey mushroom cloud lighting up the sky behind you. I reckon you’d be shocked as to how quickly you can get yourself 4km from your current location with just the gentle persuasion of an impending nuclear catastrophe for assistance, Cindy.

Of course, all this is assuming the worst case scenario, which is a full reactor core meltdown at 8am on a wet Monday morning in August.

And that’s a rather pessimistic approach, isn’t it?

There are many other days, other times and other prevailing meteorological conditions on and under which Koeberg might conceivably explode. For example, it might happen 3am on a Sunday and the roads of Table View might be completely empty.

In which case, a quick getaway is almost completely guaranteed.

So why are we spending millions and millions of Rands on bigger roads, just in case the apocalypse happens during morning rush hour? Madness.

I’m here to suggest a controversial – but actually rather reasonable – alternative. Instead of building more roads connecting Table View to everywhere else, why not just build a Big Wall and isolate Table View from everywhere else?

Firstly, this will clearly benefit anyone living outside Table View. Remember that:

well, they’ll immediately be taken out of the equation and will be unable to cause congestion on the other major escape routes out of the city, meaning that other, normal people will have more chance of survival.
Additionally, if the wall is big enough, it might actually contain some of the nuclear fallout from any Koeberg disaster.

And as for the unfortunate residents of Table View, well, are they really any worse off?

As this news article clearly states, they were never going to successfully make it out alive anyway. You’re never going to outrun a deadly cloud of enriched uranium particles going at four kilometres an hour. It’ll take you an hour to even get to the High School, which – like you – will be completely and overwhelmingly contaminated by the time you get there. You might as well just stay where you are and see if you develop any (more) interesting mutations ahead of your inevitable death.

The City of Cape Town don’t have a great record in listening to my amazing ideas, but I suppose that they might have seen the whole iceberg thing as being a bridge too far. Simply diverting funds which have already been allocated for road building on the West Coast across to wall building on the West Coast really doesn’t seem too difficult, especially given the evidence I have presented here.

I’ll sent Patricia an email – I’m sure she’s not got much on her plate at the moment.

It’s not been a great start to the day.

My phone’s software updated yesterday and reset the volume setting on the alarm clock. This was never going to be a good thing. Either it was going to be very, very quiet or IT WAS GOING TO WAKE UP EVERYONE IN THE NEIGHBOURHOOD!

I almost soiled myself when it turned out to be the latter, but that blast of volume was actually the better option as I had had a particularly restless night. My uneasy slumbers had been punctuated by dreams of Godzilla hurling flaming cars from the M3 onto nearby sports fields. And that wasn’t even the worst bit: some of the drivers of those cars had agrostophobia, and those that survived the impact and the resulting blaze found themselves wholly triggered. It was awful.

You can see why I feel somewhat unrested.

And then, with assessments for both kids beginning today, the careful balancing act on the drive to school between recognising the importance of the tests and not scaring our little cherubs half to death. And it really doesn’t help when one is so laid back he’s practically horizontal and the other is concerned that she might get a sum wrong.
At some point.
During the rest of her life.

With them suitably advised (one newly terrified, one newly blasé) (well, done, Dad), I headed off to work. I could have taken the M3, and indeed it was probably the route of choice, but the chances of being attacked by a mutated dinosaur seemed so much higher along that route, so I took the low road instead.

Along with everyone else who was avoiding death by traumatic exposure to grass.

Desperate times called for entirely sensible measures, and thus I employed a mixture of soothing Ludovico Einaudi and Susanne Sundfør to calm me down as those around me (many of them in these categories) gave their best efforts at sabotaging any attempts at me getting to the lab in time to complete yesterday’s experiments.

Suffice to say, thanks to Ludo’s Petricor [sic] and Susanne’s The Golden Age, I remained calm, focussed and got to work in time to add the appropriate reagents at an appropriate time.

It’ll take more than dinosaurs, dodgy alarm clocks, the spectre of school examinations and all of the traffic in Cape Town to beat me.

Although I could do with a nap right now.

Back in Cape Town. The traffic heading back into the city after the long weekend, together with the rain sweeping across the Western Cape made for a long, miserable and taxing journey home.

Which idiot decided on that 500m of single carriageway between the bottom of Sir Lowry’s Pass and Somerset West? Who thought that would be a good idea?
Tosser.

I’m tired, and so I’ll sort out a few photos and some more words for you tomorrow.

I’ll just slip this in before midnight… 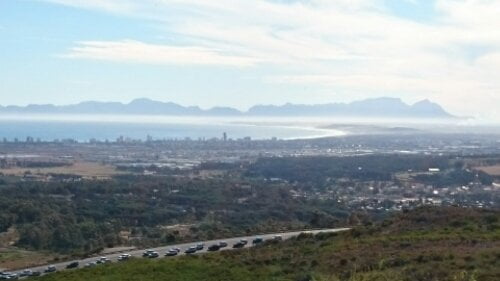 Another packed day, another bike ride with the boy – followed by a long drive home in the post-Easter traffic (at least the views were nice) and friends staying over this evening.

Back to life, back to reality tomorrow.
Let’s chat again then.