Props to the Boy Wonder for his hard work at school of late.

The school has a merit/demerit system, whereby good behaviour and achievements (for example) are rewarded with points, while being naughty or being late to class (for example) will lose you points. Each week, the scores are totted up and those with the highest scores are celebrated in school assembly. Good for them.

Here’s my son’s chart for this week so far:

1 point for his simple, but effective Science project. Good.
1 point for “excellent” work in French. Bien.

And 2 points for calmly capturing and removing a decent-sized Cape Skink (Trachylepis capensis) while all around him in his History class were losing their heads. Awesome.

I’m happy to say that my kids have no issues with any of the harmless local wildlife: 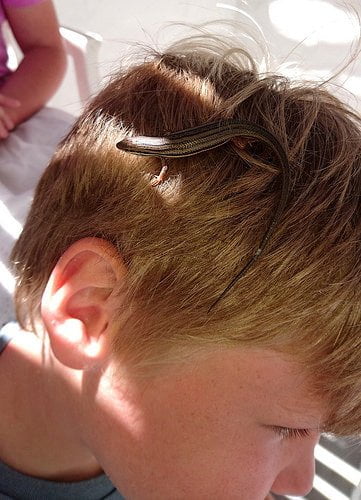 …and (equally importantly) a healthy respect for the dangerous stuff.

There’s more to schooling than just academic achievement, and I’m really proud that in a class of 20+ screaming kids (and 1 screaming teacher?), my boy was the one who kept his cool and helped out. And saved the skink, as well.

I’m pleased and proud to say that I am Guest Blogger of the Day at Tanya Kovarsky’s Rattle And Mum blog today. Let’s hope that this endeavour goes better than last time I guest blogged, which ended up with me collecting an amazing range of personal insults and several (or more) threats to my life.

However, today’s subject is no less edgy [really? – Ed.], catchily-entitled Slaying The Stereotype Of The One-Parent, Two-Parent Family, and wherein I comprehensively fail to change anyone’s mind about how little paternal effort and thought typically goes into bringing up children.

That failure aside though, please do go and support my efforts anyway, but keep the insults to yourselves this time.

Kids go through stages with regard to their relationship with their parents. Sometimes you can see obvious reasons why this might be; for example, when K-pu was born and had to spend a lot of time with Mum (because she’s the one with the boobs), Alex became firmly (often rather too firmly) attached to me. His rampant favouritism, caused by obvious and understandable insecurity, has worn off now though and we generally gauge who is flavour of the moment by his requests for bedtime story readers (Mum/Dad/Neither).

Perhaps it’s because she’s female (and therefore fussy), but K-pu has a very strict hierarchical list of favourites. I guess I should be flattered to be in second place and I have to remember that when Mum walks in and K-pu suddenly shows a complete lack of interest in me, it’s only the same as she does to other people below second place when she sees me.
(It’s still quite hurtful though). This picture was taken while we were away last weekend. Mum had popped up the road to pick up the boy from the Kid’s Club and K-pu – outraged to have been left with only her dad for company – went and planted herself firmly by the front door and sulked until her mother returned.

That’s (another) one for her 21st birthday, then.

And lo, it came to pass that I was left at home with two children to bath and put to bed because Mrs 6k had gone out partying. Which shouldn’t really be a problem, because Mrs 6k has single-handedly bathed and bedded the kids on a number of occasions and is full of helpful hints and tips.
Here’s how it goes:

And here’s what actually happened. Note that I have written this in the third person as my therapist advised me this morning that this way, I may be able to forget it more quickly. PammieJane may want to look away at this point.

Of course, even if I could, I wouldn’t change a thing.

Your own. To keep and look after, I mean.
Obviously, it’s a given that buying a child on the black market costs a bomb. There are officials to bribe, swarthy men in dark suits behind nightclubs to pay and guilty-looking nurses in squalid third world orphanages who set the whole process in motion. Or so I’m guessing anyway.

With the credit crunch well and truly upon us, I have tried many different ways to cut back on the vast expenses which our children thrust upon us. With limited success, it has to be said. But I have found some pleasure in getting the most out of the money that we are spending.
Take Alex’s playschool for example. Each morning when I drop him off, I take time out to help him paint a picture. And I don’t mean any of that minimalist crap, either. The more paint, layer upon layered layer, the better. It’s a flat monthly fee for the playschool and I reckon that we use up about 75% of the paint budget on Alex’s early morning art alone. Good value.
Obviously, the end result is usually pretty grim to look at: often dark and thick, black and grey and deep purples merging with one another. The teacher has actually suggested a visit to an educational psychologist as a result of reviewing his work, but that sort of specialist help costs money. Which defeats the object. Or objet in this case, I guess.

Today, I took the kids to Westlake Park (which is, in fact, just West of a lake) (genius). Westlake Park is not a park at all. There isn’t a blade of grass, a gang of dodgy looking youths or any dog excrement to be seen anywhere.  What there is, is a collection of restaurants and a giant jungle gym: 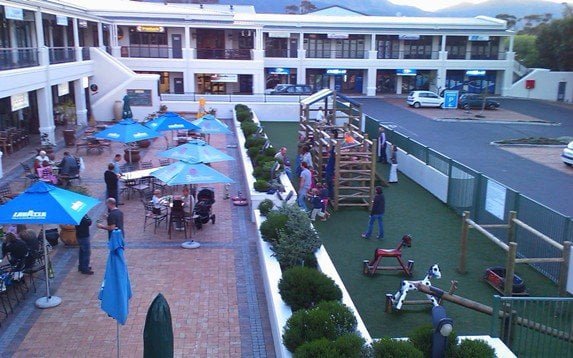 Westlake Park: great for kids, heavy on the wallet

Today, I had a great idea while enjoying that coffee. Having whisked the kids off to Westlake, I was sitting and pondering on how we could save more money. And then it came to me. I quickly canceled the cake I had just ordered and chatted to my three-year-old son. You would not believe how happy he was to be asked if he wanted to spend the whole day on the jungle gym. Of course he did!
So having finished my coffee and paid the bill, I nipped off home at 11ish, watched the rugby all day and went back at 6 to pick him up.

Well, that was the plan anyway. The police actually dropped him off here at about 4 o’clock, as the restaurant was closing for their pre-evening break and had noticed he was still there. Alone. While they waited for the police to arrive, he got an ice cream. All I got was a stern ticking off and made to promise not to do it again. Oops!
But that’s a 3-year-old entertained for 5 hours, an ice cream, chaffeur-driven home and a coffee all for the price of a coffee.

So guess where we’re going tomorrow? See you there, errant dads of Cape Town!