This is awful. Where’s the incentive to do well in your exams when dismemberment is the only reward? 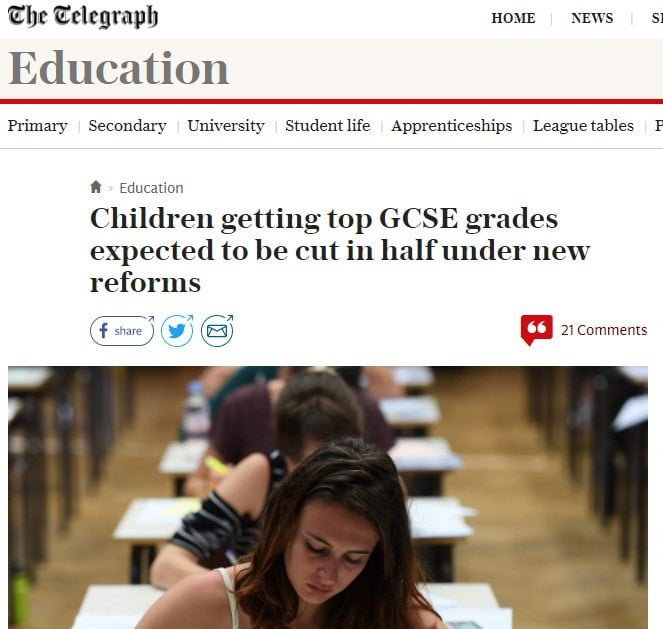 It’s no wonder that this female student looks so despondent: she has studied hard and knows the answers to all the questions in front of her. She is also now aware that her inevitable bifurcation lies ahead.

Look, I fully recognise that the number of students achieving the top grades is getting disproportionately high, potentially devaluing the qualification, but to lower those numbers through traumatic and/or surgical hemisection seems at best, a little harsh, and at worst, wholly barbaric.

Either way, these reforms are completely over the top and need revisiting.
Why not just make the exam papers more difficult or something?

I’m not saying that the Ebola situation is in any way “good”, nor am I saying that it is “under control”. But those facts aside, we still need some degree of perspective.
And stuff like this doesn’t help with that approach:

Ebola ‘could become airborne’: United Nations warns of ‘nightmare scenario’ as virus spreads to the US
Exclusive: Anthony Banbury, chief of the UN’s Ebola mission, says there is a chance the deadly virus could mutate to become infectious through the air

And technically, I suppose, he’s correct. In the same way that I “could” win tomorrow’s lottery. It “could” happen, but actually it’s “not going to” happen.
And you only have to read the piece to see how his words have been… ironically… mutated to fit the article’s agenda.

Because then, further down the article, this:

Although experts agree that the risks from Ebola are severe they do not believe the virus could become airborne.
Professor David Heymann CBE, chairman of Public Health England and professor of Infectious Disease Epidemiology at the London School of Hygiene and Tropical Medicine, said no virus transmitted by bodily fluids – as Ebola is – had ever mutated to airborne transmission.

Note the somewhat smaller typeface. And the lack of drama. That’s simply because when everyone is writing about Ebola, you need to make your piece stand out if you want it to be read and:

just doesn’t cut the mustard in terms of attracting readers to your column, your site and its adverts.

Really, you’d expect better of the Telegraph. Although perhaps not of 2Oceansvibe.

Not my usual beat, but: Ebola ‘could become airborne’: UN warns of ‘nightmare scenario’ as virus spreads to the US | http://t.co/CfSQJVP7Jq

Speculation that Ebola virus disease might mutate into a form that could easily spread among humans through the air is just that: speculation, unsubstantiated by any evidence.

This kind of speculation is unfounded but understandable as health officials race to catch up with this fast-moving and rapidly evolving outbreak.

“Speculation, unsubstantiated by any evidence.”
Again. Not great for The Telegraph.

Herewith the second of the things I saw on The Telegraph website this morning (this being the first), albeit that this one appears to have been around for a short while. It’s all about antibiotic resistance.

The microbiologist in me has been telling you for a long time that we’re about to run out of useful antibiotics and that we’re all buggered. Well, here’s a nice little project from The Telegraph which sums up whole miserable situation up quite nicely. It doesn’t condescendingly spoon-feed the information, but rather, it’s nicely aimed at engaging with an audience which it presumes is interested and intelligent. Yes. I mean you guys.

There are expert quotes:

“We risk going into a post-antibiotic era, and that could start any time in the next 10 or 20 years, when modern medicine becomes impossible. Routine surgical procedures – hip replacements, caesarean sections, modern cancer treatments – all are based on using antibiotics to prevent or treat infections. Without them, people will die.”

Sir Alexander Fleming did warn us. During a speech in Stockholm in 1945 after accepting his Nobel Prize, Fleming sounded “one note of warning” over bacteria becoming resistant through inappropriate use of the drug. “The time may come when penicillin can be bought by anyone in the shops.” he said. The idea of his precious discovery being stockpiled by online pharmacies, used to fatten up our fish and livestock, dumped in rivers and sprayed over fields, would have baffled and horrified him in equal measure.

…and a superb interactive graph showing how long it took for our bacterial foes to become resistant to each and every antibiotic from Penicillin (13 years) to Macrolides (a couple of months).

It even mentions Dr Ajit Lalvani, with whom I used to play football every Thursday evening in Oxford (decent, if unenergetic midfield general; good at pointing a lot, in case you were wondering), so it must be good.

If you have a few minutes spare, and you want to read how utterly doomed we all are (because who doesn’t?) and how you can do pretty much nothing about it, go and give it a read.

Here’s a taster from “Imagine My Surprise…”, a collection of the best unpublished letters to the Daily Telegraph throughout 2012.

The letters include a 68 year old husband who describes the fact that the Telegraph published news that 67 per cent of women over 80 are sexually active and that most achieve orgasm as “devastating news”, a man who can’t see the attraction of Pippa Middleton, claiming that he sees “better-looking girls in the queue for Greggs in Walsall” and a correspondent with a simple question: “Am I alone in thinking that Jeremy Paxman looks like a Proboscis monkey?”

Click the link and go read the rest. For us Brits with our dry sense of humour, it’s an ideal Christmas pressie.

Imagine My Surprise…: Unpublished Letters to The Daily Telegraph by Iain Hollingshead is available from Amazon.co.uk

Following the recent terrorist attacks in Mumbai, The Telegraph newspaper (more specifically, hack Francisca Kellett) has helpfully put together a list of the twenty most dangerous places on earth to visit. And there, right behind Afghanistan, Iraq and Chechnya and just missing out on a medal is our dear own South Africa, although, as Kellett admits, seemingly almost with an air of disappointment:

…most visits to the country are trouble-free.

which doesn’t sound ever so dangerous, now does it?
South Africa beats some tough competition to finish so high up the list though, including the DRC, Sudan and world homocide leader, Columbia. Iran is apparently fine, while Somalia doesn’t even warrant a mention, so I assume it’s safe to go there too. I wouldn’t advise arriving by boat though.

Look further into the Telegraph’s extensive Travel section and you will find Jeremy Vine‘s verdict of Cape Town:

I realised it was the perfect place to be in the middle of the British winter: you leave a damp, grey Britain, and 12 hours later you’re in a sunny Cape Town. Fantastic!

I have an abiding love for the area – known as Cape Province when I was a boy – and I go back as often as possible. All in all, the Western Cape is just a fabulous part of the world and will always have a special place in my heart.

All of which makes Kellett’s rating of 4th most dangerous place on the planet seem slightly lonely, slightly foolish, slightly… well… bewildering, really.

I’m not denying that SA has a crime problem – that would be simply foolish. However, I don’t think that it rates as being more dangerous for a tourist than, for example, Iran or Somalia.

Francisca Kellett knows better, of course. Her winter break this year will be in safe and sunny Mogadishu.