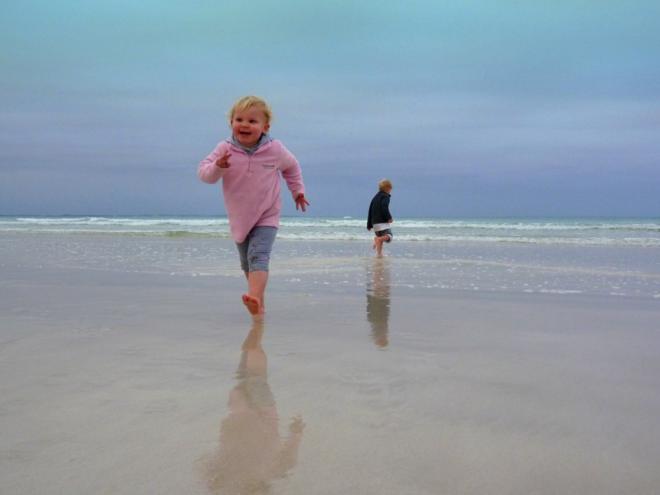 It would be nice to have some better weather than when this picture was taken, although as you can see, the kids enjoy the place even when the weather isn’t all that it could be.

And, as I mentioned here, there is no internet and no cellphone signal where we’re going, so I will be mercifully quiet. Enjoy the silence.

Another one from this weekend. And the comment that goes with it (from her):

simplicity is more often than not, a thousand times MORE

We’re back, having set a new record for the Struisbaai – Cape Town run and we’ve ordered pizza.

I would love to wax lyrical some more about the wonder of the Southern Cape, but I am hungry and tired and so I’m going to let the photos speak for me.

It was a great weekend, but I’m going to be happy to be back in my own bed this evening.

You know how it is.

Season’s Greetings (mid to late summer) from Struisbaai, home of the southern hemisphere’s longest stretch of white sand beach, a bewilderingly large variety of birdlife and – for this extended weekend, at least – family 6000.
I love the Southern Cape – perhaps because the rolling farmland, rugged coastline and friendly residents remind me of the Isle of Man. But whereas there’s plenty of stuff south of the Isle of Man, you don’t get much more south than here without getting very wet (and then very cold). After all, we’re about 10km from Cape Agulhas, site of the most southerly blog post this continent has ever seen.

We’ve rented a fisherman’s cottage for the weekend and it’s perfect for our needs. It’s really just a base for sleeping and braai’ing, within a minute’s walk of the beach and situated directly beneath clear blue skies. But it’s clean, pleasantly cool inside, nicely appointed and actually rather pretty to look at. I’ll post the details on here once we’ve moved on – it would be both awkward and annoying if a host of 6000 miles… readers turned up looking for autographs and locks of hair like when I was away last time. If you were better at stalking, you’d know where I was anyway.

While the beds are comfy and the air is fresh – usually a recipe for prolonged slumbers – Alex was up dangerously early this morning. While a 5am wake-up call isn’t to everyone’s tastes when trying to get some much-needed R&R, it’s par for the course when you have two small kids. After some negotiation and a couple of sausages from last night’s braai, I took both him and the camera down onto the beach for walk and some quick sunrise pics, Joyanne-style.
And look – I can see the attraction in one way – it was nice exercise, the views were pretty spectacular as the sun burst out from behind the morning clouds and turned the turquoise ocean a deep gold and – save for a couple of fishermen – the beach was ours. But on the other hand, I can also see the attraction of a deep bed, a cosy duvet and a warm wife.
So I’ll be honest: the jury is still very much out on the whole sunrise beach trip thing.

It’s now lunchtime and by some miracle, both kids are fast asleep. Later this afternoon, we’re going to take another step towards cementing our relationship with this beautiful area by inspecting a plot of land near here with a view to purchasing it and – at some stage in the future – having our own little fisherman’s cottage by the sea. I guess that what they call “living the dream”.