This one concerns a City of Cape Town Press Release about their sewers. Not exactly your normal Tuesday morning reading, but I was concerned in case there was a local fatberg that I needed to know about. Well, not quite, but it was about sewer blockages and the odd things that cause them.

First of all, some facts and figures:

Cape Town has more than 9 000 kilometers of domestic sewers, which convey the volumes of sewage and industrial discharges coming from several suburbs to its 23 wastewater treatment works.
Annually, the City deals with approximately 102 000 sewer blockages – or about 11 blockages per kilometre – largely caused by the incorrect usage of the onsite sewer system, the removal of sewer covers, the dumping of inappropriate objects and vandalism of the City’s infrastructure. In the 2012/2013 financial year, 57 000 of these sewer blockage incidents were as a result of contraventions to the Wastewater and Industrial Effluent By-law.

And then, Councillor Ernest Sonnenberg gives us a list of some items that his staff have found in, and removed from, the city sewers:

Right. Tyres and trolleys get around, so that’s understandable. Building rubble is expensive to dump legally, so that too, makes sense (unfortunately). Sheep get around too, and they are known for following each other like… well… sheep… One falls into a sewer, the next follows, and so on, just like big woolly lemmings.
Surely we can see that the horns and the skins go together. It’s not rocket science. It’s not even advanced shepherding.

But then, things get a bit sketchy with the cutlery sets and suitcases.
Were people perhaps trying to unblock their toilets… with… cutlery… and then it disappeared around the u-bend?
But then why would you use cutlery for that task and at what point would you not stop using cutlery to try and unblock your loo?

Maybe you lose a fork and you think:

“Damn, I nearly had it unblocked. The idea of using a fork to unblock my bog may have been fairly unorthodox, but it turned out to be the near perfect tool for the job. Things were going so well until I lost my grip on the elegantly sculpted handle. I’ll confidently risk another fork in a secondary attempt to ensure a free flow through my water closet.”

But then you lose that one too, and wouldn’t the doubts start to creep in a bit?

“Grr. I can’t afford to keep losing forks like this. Maybe it would be best if I just gave up on the… hang on… perhaps a spoon might do it?”

And pretty soon, just like getting hooked on heroin (well, similar, anyway), you’re desperately trying cake forks, fish knives, and – as you hit the proper hard stuff – a gravy ladle, in an attempt to poke the blockage (which now also contains quite a lot of cutlery) down the waste pipe. And when that doesn’t work, you automatically think:

“Hmm. Maybe I need something bigger. There’s a suitcase on top of my wardrobe. That might be the answer.”

I don’t think so.

But all this speculation is very much secondary to our initial question, and it’s that one which forms the title of the post:

WHAT DID THEY FIND IN THE SEWER?

Because Councillor Sonnenberg quietly drops this little gem in towards the end of the press release:

As we are committed to being a well-run city, responsive to the needs of our citizens, we have gone to great lengths to ensure sewer blockages are fixed timeously. A shared responsibility for this massive challenge, however, is vital. It causes severe inconvenience to many residents and our staff works tirelessly to resolve these incidents. Often our staff find objects in the system that are so disturbing that one does not even want to mention them.

Wait… what?
Let’s run that one past you one more time:

Often our staff find objects in the system that are so disturbing that one does not even want to mention them.

What? More disturbing that cutlery sets and suitcases? And more disturbing than the poo? Because poo can be pretty disturbing, but to be honest, unpleasant though it is, it’s a fairly normal thing to find in a sewer. So what exactly did your staff find in the system?

WHAT DID THEY FIND IN THE SEWER?

What could be more disturbing than the stuff you’ve already mentioned and the stuff that we all expect to be there anyway? Were there aliens? Do we have a local version of Area 51 in the tunnels under our streets? It seems an unusual way to introduce themselves to us.
Was it perhaps Zombies, silently gathering ahead of their inevitable take-over of the city, country and world in the upcoming apocalypse?
Teenage Mutant Ninja Turtles? Not hugely disturbing – just distract them with pizza.

Or did they perhaps find a secret Afrikaner enclave? Now that would be disturbing.

“We were alerted to the presence of the enclave when we heard the unmistakable sound of Kurt Darren wafting down the pipes near Durbanville. The smell of human waste was replaced with that of braai smoke and boerewors.
And then some red balloons floated past.”

Either way, until we are informed of the whole truth, there will always be speculation, some of it rampant, like this stuff. That could lead to panic – I know I’d be pretty worried if Steve Hofmeyr was living under my street. For that reason, I have emailed Cllr Sonnenberg in an effort to get to the… er… bottom of this matter and I will let you know as soon as I have any further information.

Much amusement in Newcastle (no, not that one) OVER the weekend as Afrikaans rapper JACK Parow was escorted off stage halfway through his performance, in order to protect him from a small number of the audience who labelled him “satan slang” (devil snake) and a “disgrace to the Afrikaans language” after he swore on STAGE.

Afrikaans rapper Jack Parow says he is “cool” about being led off the stage midway through a concert in Newcastle when his lyrics upset some in the audience, and that he had a “rad time” regardless.

Parow, whose real name is Zander Tyler, was taken off the stage at the Vodacom Winter Festival on Friday night when a group, upset by his lyrics – which included profanities – physically threatened him.

One man nearly jumped on stage, but was pulled back by police called in to help festival organisers with the group.

A war of words erupted on the Newcastle Newspaper’s Facebook page, with people calling Parow a “satan slang (devil snake)” and a “disgrace to the Afrikaans language”.

Now, I can take OR leave Mnr Parow and I can HAPPILY manage without swearing in my music, but seriously now, what were the audience expecting? It’s like turning UP to a Metallica gig and “hoping they don’t play anything too loud”.
I have kids and I try to shelter them from swearing (amongst other things) as much as possible. That MEANS not taking them along to Jack Parow gigs (amongst other things). No matter HOW backward Newcastle is, the allegation that this performance was instrumental in corrupting their youth is a bit OTT.

Parow said he was singing his song Dans Dans Dans when the microphone was taken from him by an organiser and he was led off stage. He then noticed police trying to calm a few men beside the stage.

“Some people don’t like the swearing. I was singing ‘Dans, dans f***en dans’. This one guy was shouting at me and said: ‘Why are you f***ing swearing?’, but that was funny because he was swearing at me.”

As you will have noted above, all of this has (typically) reared its head on Facebook, WHERE a couple of comments by Anthon von Lisenborgh have captured the imagination of some individuals and INTRODUCED random CAPITALISATION to popular culture: 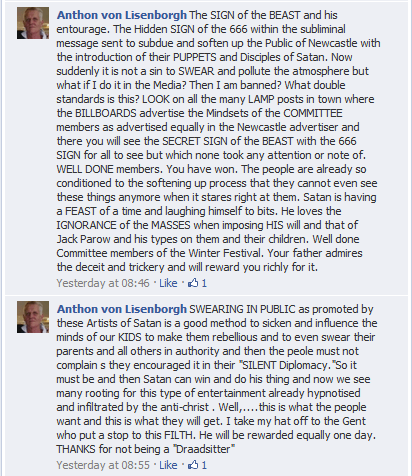 The biggest IRONY for me is that Jack Parow’s shortened act followed that of Afrikaner Steve Hofmeyr (and whom Anthon comprehensively fails to accuse of being an “Artist of Satan”), a man perhaps BEST known for his racist rants, being divorced by his wife after having “numerous affairs”, assaulting the female editor of a popular gossip magazine and being described by the Deputy CEO of the South African Institute of Race Relations as being a disgrace to South Africa and of using his “not insignificant following to sow anger and hate among young white people”.

When it comes to role models, it would seem that the Afrikaans culture is struggling somewhat, but while Jack Parow CONTINUES to use the F-word (and he will continue to use the F-word) Anthon seems conveniently blinkered to Mr Hofmeyr’s shortcomings.

UPDATE: A bit more on Anthon – he’s written a book: Apocrypha 999 – The Mystery of Solomon and Queen Bilqis of Sheba – and in his author bio (filled with MORE random capitalisation), he includes THE line:

…do with it as you feel fit or do nothing if you want, it is up to you to decide and not me.

Because my most important reader is me and I might like, one day, to recall Sipho Hlongwane’s open letter to Steve Hofmeyr, delightfully entitled “Need any help removing your head from your arse, Steve?“, I’m documenting it right here and now. 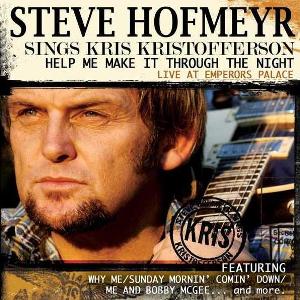 And yes, this excerpt is quite funny, but it’s probably best that you click the link above and read the whole thing for maximum entertainment.

I also find it quite funny that you “own” Westernism, just because you’re a white man. Don’t give me that “us” vs “you” nonsense. Where were YOU when the printing press was invented, Steve? Where were YOU when the nuclear bomb was invented? Did you help Gottlieb Daimler with that first motor vehicle? Did Thomas Edison consult with you when he had that light-bulb idea? Until Julius Malema drives a car that YOU built, and wears a shirt that YOU designed, don’t come at me with that humus.

The irony of having to hear a lecture on originality from a man who sings Neil Diamond covers for a living isn’t lost on me either.

Steve, here’s a word of advice. I know you mean well. You had the moral upper hand and everything, but you squandered it by being a cracker. Leave this sort of thing to the people who know what they’re doing when they put pen to paper, alright? Go back to doing whatever it is you do when you aren’t riding bike in the veld. Go back to impressing suburban housewives with that lush goatee of yours.