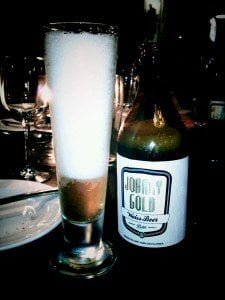 We had a really good MBCC meal out at Societi Brasserie in Tokai last night, where the Tall Accountant poured himself this particularly spectacular glass of beer.
I would particularly recommend their mackerel pâte with spicy chutney and the wonderfully-cooked filet au poivre.

One question that did arise, however, was around the difference between a Bistro and a Brasserie, given that Societi Brasserie is the new sister restaurant of Societi Bistro in Gardens.It turns out that aside from spelling and Scrabble scores, there are some minor, but important, differences between the two.

A bistro, sometimes spelled bistrot, is, in its original Parisian incarnation, a small restaurant serving moderately priced simple meals in a modest setting. Bistros are defined mostly by the foods they serve. Home cooking with robust earthy dishes, and slow-cooked foods like cassoulet are typical. [link]

A brasserie is a type of French restaurant with a relaxed, upscale setting, which serves single dishes and other meals. The word ‘brasserie’ is also French for “brewery” and, by extension, “the brewing business”. A brasserie can be expected to have professional service, printed menus, and, traditionally, white linen — unlike a bistro which may have none of these. [link]

These definitions don’t quite fit with the similar ambience and menu at the two Cape Town Societi businesses, but with food and service like we got last night, I think we’ll happily let them off.

UPDATE: According to their website , the Brasserie I was at last night is in Constantia, not Tokai. If this is the case, Constantia is MUCH bigger than I thought. And it probably includes a golf course and a prison as well. If you stretch it still further, you might get a beach in as well.