You’ll be wondering if you need to declare your valuable personal effects to SARS before leaving South Africa, in order that you are not charged duty upon your return to the country, right?

After this alleged incident, there’s been some confusion over this, so here’s the definitive answer.

However: Yes, you do.

Unhelpful. So I looked for advice from some experts.

But before we go there, here’s an interview with SARS executive Beyers Theron in which he says:

If you have your laptop or cellphones with you, you’re not required to declare that when you leave the country.

So that’s clearly a no.
And here’s that statement from SARS, in which they say:

A more user-friendly and secure process has been created where the traveller completes a TC-01 (Traveller Card) notifying his or her intent to register goods for re-importation. This is presented to the Customs Officer who will then capture this online on a Traveller declaration system (TRD1). The traveller authenticates the declaration by signing on a digital signature pad. A copy is printed for the traveller to retain as proof of registration.

Which does appear to be a yes.

I’m flying out of the country soon, so I had a quick look at how many flights leave SA for other countries. Then I decided that that was a bit stupid because the numbers were just too beeg for my puny microbiologist brain to handle.
So I concentrated on Cape Town.

That’s a lot of flights. All of which got me wondering about just how many people were likely to be on those flights. So I looked up the most recent available statistics and found that on average, each day 2,760 people depart CPT on international flights.

Of those, how many travellers are local residents? There aren’t any recent figures, but a third seems like a reasonable assumption, based on what information is available. (Note that the figures are much, MUCH higher for JNB: ±80%.)
But back to Cape Town, because that’s where we can like to be looking at.

Now we have some numbers, I’can, and have been doing, some rudimentary calculations.

According to the missive above, each of those 920 people will have to go to SARS in town simply to register their personal goods (with proof of ownership for each) in order that they might not face having to pay duty on them upon their return.
Their cellphones, their watches, their laptops, their cameras.

920 locals per day = 6,440 locals each week, but since SARS is only open five days a week, that equates to 1,290 local people at that TC-01 counter each day. SARS is open 8am-4pm, so they’ll have to process 162 people per hour, or 2.7 people per minute every minute.
That’s 1 person every 22.2 seconds to ensure that everyone is accommodated and can:

avoid the inconvenience of having to explain ownership upon returning from travel abroad.

which clearly seems to be a perfectly reasonable and manageable target.

Of course, this legislation has been in place for years and years and years, and no-one has ever fallen foul of it until some petty jobsworth SARS official at OR Tambo decided to have a pop at the ridiculously named Mr Toler Wolfe-Coote as documented above.

The can of worms has been opened. But I’m sure the our erstwhile tax agency is completely and adequately prepared to deal with the situation.

Riveting stuff, especially for those overseas (not), but there really needs to be a website devoted to these sort of things. An SA FAQ or something similar with straightforward answers to simple questions. I’m not going to do it, but I am going to do this one. And maybe one about what time the booms at Kenilworth Station are closed each day. That would also be helpful.

But anyway, without further ado:

YES!
A MINUS SIGN on your IT34 Notice of Assessment from SARS
MEANS THAT THEY OWE YOU some money.

Look for the line:

to see how much they’re going to pop into your bank account.

Of course, the converse is true if you don’t see the minus sign there. Sorry. You owe your bit towards a new gold plated bog roll holder for the 78th guest loo in Nkandla.

Dinner was nice, although my son wanted me to leave a piece of freshly cooked pasta on his bedside table when I went to switch his light out this evening. I declined, because it would never have stayed there all night and it was smeared with a generous coating of olive oil. Olive oil, much like baby oil,  just never comes out of the sheets, does it?

But, to be honest, it’s gone downhill from there. I have spent the last hour with an accountant, staring at the details of this page. Now, at this point, I should at least explain that the accountant in question was Mrs 6000. And yes, I knew that she was an accountant when I married her, which just shows you how special she must be. As I complained of the latest raping of my payslip by the taxman, her eyes started to sparkle – the things that make normal people come down with a sudden case of narcolepsy make her day. Strange lass.
But even her enthusiasm did little to make a very, very dull subject any less dull. And, when it was over, the verdict was that I openly gave consent for higher percentage relations to take place and my case was thrown out of court with costs. And SARS had been proven right and I turned to the solace of red wine once again.

And thus, onto that quota photo, which – thanks to my wittering on – now no longer really fits the standard definition, but here it is anyway. 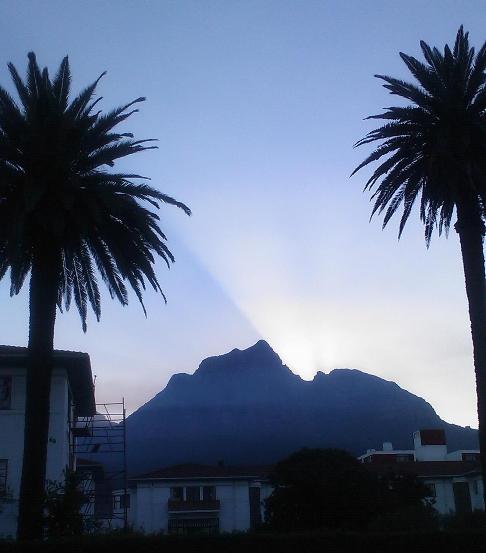 Shot by phone from Campground Road in Rondebosch on the way home yesterday evening, the shadow of Devils Peak visible in the evening sunlight through the smoke of the fires in Fishhoek.
The palm trees framed it nicely, the scaffolding less so. Thirteen letters where one would have done

The South African Revenue Service (the equivalent of the Inland Revenue or the IRS) actually has a pretty good reputation over here. They rarely get stuff wrong, they get things done quickly, quietly, efficiently. And then they give all the money (all R627,692.8 million of it) to the highly respected Trevor Manuel and he spends it wisely.

This find in the PO Box wasn’t quite so impressive though. Is this what you mean by Stamp Duty, Trevor?