I – quite reasonably – wrote this post the other day, lamenting the state of… well… all of this stuff [gestures wildly]. And while some of that stuff is still in a thoroughly lamentable state, there is a light at the end of the tunnel in a couple of cases.

The biggie: 25,000 troops moving in to nip what looks like an attempted insurrection in the bud. (A bud that has cost billions, killed hundreds and cost the livelihoods of tens of thousands, but still something of a bud.) We still need to address the failure of government intelligence though. There were clues that weren’t difficult to spot:

Away from the real drama… the gutter/waterproofing team turned up out of the blue this afternoon and they’re busy repairing all the problems on the roof. That means that the ceiling guys can finish up with their work over the next day or so, and that means that we’ll be able to have a nice warm fire at some point real soon now.

In other news, we are now the parents of two teenagers. Gone are the days of having “kids”: they’re young adults now. So Happy Birthday, Scoop! (but God, I feel old).

Thankfully, even that has a silver lining: I’m now old enough to register for my vaccination, and I nearly even got it today, before I was turned away by a lazy jobsworth at the local vaccination centre. I wasn’t old enough for them to jab today, he said. It wasn’t like they were jabbing anyone else though: the place was empty. Sure they could have slipped a quick needle into my upper arm.

And so it’s either an appointment on Monday (but we’ve heard bad things about the place – queuez for dayz, even with an appointment) or on Thursday (back with the jobsworth) for us. But that’s still much earlier than we expected.

Some improvement in my mood. Albeit from a very (very) low base.

Tomorrow’s protest march (or “prohibited event” as the city are quietly calling it) in Cape Town looks set to go ahead and will almost certainly be bigger than last month’s paltry 3,500 turnout. But whether the organisers will manage to get their somewhat optimistic estimate of 200,000 remains to be seen. I fully expect the Metro Police to tell us that there were 10,000 in town while Loyiso Nkohla and his Ogobityholo BaseKapa chums claim 3 million or something.

Either way, it’s reasonable to expect widespread disruption and – sadly – probably high levels of violence as well. And while the city has applied for an interdict to prevent the marchers from marching. This strikes me (no pun intended) as being a bit of a waste of time, since permission to march has already been denied and the organisers don’t seem to give a toss. I find it unlikely that they’ll suddenly have a change of heart when there’s an interdict against them.

Comrades! Let us take back this city! Let us show the White Madam that she cannot… wait… what? She’s got an interdict? OK. Never mind. Back to work everybody!

The Province claims to have done all they can to meet the demands of the organisers, and says that there is therefore no need for this action on Friday:

The Province has done everything that could be expected to engage with the leaders of Ogobityholo BaseKapa from the start of their campaign and we are willing to continue engaging with them on their issues of concern when presented in good faith. It should therefore be apparent that there is no reason for them to march on Friday, as our supposed “lack of engagement” was the claimed reason for their march.

But while the City is publicly being very quiet about the march and their preparations for it, there’s no doubt that a lot of planning is going on behind the scenes. Today’s Cape Times reports that there’s an internal memo doing the rounds:

It states that intelligence has been gathered by various agencies which suggests that march organisers have been mobilising people from Khayelitsha, Dunoon, Wallacedene and Brown’s farm in Philippi. Residents from informal settlements in Stellenbosch and Paarl are also believed to be joining the march.

The memorandum states that “looting has been encouraged at the planning meetings that have been taking place in the informal settlements. Organisers have suggested that food and Christmas presents will be easily available in the CBD for the marchers.”

More chillingly is the advice for emergency services and hospitals to prepare for large numbers of casualties:

Staff were also notified that “mass casualty resources” have to be checked and ready for deployment.

While this softly, softly approach is presumably about not giving the marchers much publicity, it’s certainly not doing the concerned citizens of the City any good. Helen Zille’s twitter timeline is filled with questions about whether people should come in to work tomorrow and whether any preparations have been made:

is there a strong possibility of a strike 2row?Is it advisable not 2 go to work 2row- if one works in town?

I own a showroom in central CT and am concerned about the rumored protests Fri. Will there be a police / army presence? Tx Barry

And who can blame them when that (publicly available) Provincial report contains this sort of information?

The Premier has written to the Mayor relaying information received from the State Security Agency that the protest march on Friday is deliberately intended to be violent. The organisers are planning various disruptions that include enforcing a work stay-away, stopping taxis and buses from operating and staging a three day sit-in outside the Provincial Legislature. The danger of random attacks on taxis, buses and commuters is therefore very real.

The information is that the organisers want this protest march to be accompanied by looting and attacks on businesses and commuters, although they plan to deny that this is their intention so that they can eschew responsibility for any violence and disruption that occurs.

If you’re going to make those sort of statements public, you also need to publicly reassure people that you’re doing something to prevent it happening and to keep them safe. That hasn’t been evident from the Province or the City as yet, so it’s natural that people are going to fear the worst about tomorrow in Cape Town.

Because you can’t have enough about riots on your blog in any given week.

This is nice: The London Riot Re-enactment Society. And yes, we all remember the “recent” riots there, but London has a history of civil disturbance and the LRRS wants to recreate those moments for posterity. And fun.

The first of these notorious dates was Wat Tyler’s Peasants’ Revolt way back in 1381, and would – entirely accurately – be re-enacted as follows:

100 000 re-enactors dressed as peasants angry about the imposition of poll tax (and other concerns such as the fact that they had no rights) will march from Kent and occupy London for two days, opening all the prisons and ransacking the Tower and Lambeth Palace and demolishing Savoy Palace completely (this part will be easy as it isn’t there), throwing looted treasure into the Thames and beheading judges and lawyers. In a dramatic climax which will take place at Smithfield a re-enactor dressed as the 14 year old King Richard II will meet a re-enactor dressed as Wat Tyler, who will then be murdered by a re-enactor dressed as the mayor.

Sounds like posterity. And fun. But the numbers and the practicalities will make things difficult to organise. Fortunately, by doing away with some of the rules practiced by some other re-enactment societies, the red tape can be reduced.

A knowledge of historical costume and weaponry AND some experience of rioting is the ideal combination for a LRRS member, but members can join with knowledge of one, or the other, or neither. After all, many participants in the riots that we are re-enacting had not a clue what they were up to, and we want historical accuracy, do we not? Neither will we, like some re-enactment societies, impose strict rules against the consumption of alcohol. Most of the top riots involve a bit of drinking. If, for example, you are involved in a re-enactment of the Gordon riots and you are very good at acting drunk for days on end, then feel free to just drink water, but if you think that only gin will do the trick, then drink gin, and we won’t ask where you got it from.

And why stop at re-enacting riots that have actually happened? Why limit yourself in that manner?

The LRRS is full of excellent, innovative ideas in order to preserve London’s fascinating history and I’m hoping that I’ll be lucky enough to take part in a full-scale re-enactment next time I’m visiting the homeland.

Out of the bad, and it is bad – ridiculously, stupidly, embarrassingly bad – comes some good.

Step forward, photoshoplooter, whereby images of heinous acts committed over the last few days are turned, via the medium of Photoshop, into embarrassing identikits of the guilty parties. 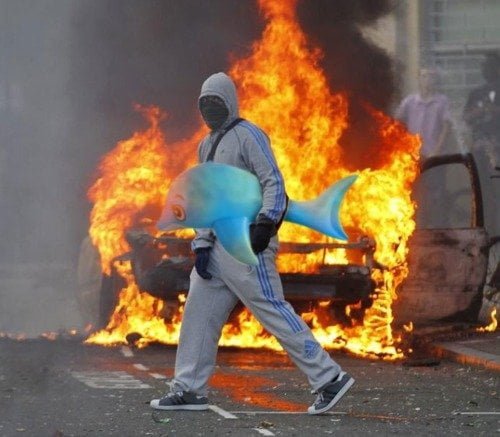 I could do stuff like this. All I need is Photoshop.

As I write, it seems to be spreading: Manchester, Salford, West Midlands, even mention of Milton Keynes and Mansfield. Looking for positives in all this, Wolverhampton may actually be improved by some violent redesigning.