I know. You’ve been on the edge of your seats waiting for the results to filter through from the Isle of Man. And I can now officially reveal that the new World Bonnag Champion is Coleen Cowin, having beaten off some strong competition from two time Champion Vanessa Callin. In fact, bookies’ favourite Callin seemed all set to make it a hattrick of wins before a bewilderingly disastrous incident with the bicarb.
Meanwhile, elsewhere in the competition, it was only Mrs Clague that let the Clague household down, with hubby Gordon taking first prize in the men’s event and son Bryce demolishing his opponents with a magnificent Manx Bunloaf-style bonnag in the youth section. This being the 21st century, it’s less likely that Mrs C will be cast out from the family in shame.
But still, if she was, who could really blame them?

The 2015 Championships were nothing if not innovative, with a gluten-free bonnag side tournament and a Mandoza-inspired 50-50 bonnag competition, whereby a half-plain, half-fruit bonnag is presented to the judges in kwaito style.

If you want to make your bit for World Bonnag stardom in 2016, now seems a good time to start with a basic fruit bonnag recipe (the plain bonnag really being suitable only for industrial building projects, IMHO) like this one:

I mentioned it here. And I got it from here (although I have adapted it a little bit).
If it goes well for you, support the author and buy a copy – there are loads of other lovely recipes in there too.

As I said, this is a slightly adapted recipe. I found that the Hendo’s flavour wasn’t coming through enough and so I (wait for it) quadrupled the amount the that original recipe suggested. That might seem like a massive increase, but if anything, I think you could go even further. Be warned that this makes a lot of very rich chocolate mousse – certainly enough for eight people. You need the berries and the mint to cut through that richness.

Usually the only recipes on this blog are ones for disaster. But given that I got a couple of cookbooks for Christmas and the fact that I am now a master in the culinary arts, expect some more over the next few months. I’d suggest that this one marks a pretty decent start to the proceedings though.

I always wanted to have my own cookery blog. I once asked a foodie about being a foodie and he told me that it’s tremendously cool to be a foodie. And there’s no ambivalence in foodie circles. They either love each other or they hate each other. No middle ground.
I think I’d be good at such dramatic extremes. I just need to pick the right side to be on.

Anyway, while I’m doing that, and with it being Tynwald Day (roughly the Manx equivalent of yesterday’s American Independence Day in layman’s terms, I guess), here’s a recipe I devised copied from a conveniently hung Manx calendar. 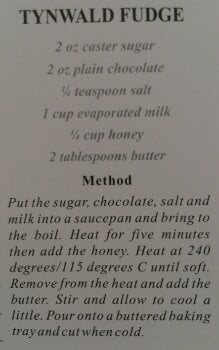 I haven’t actually tried it, but at the end of the day, it’s fudge, so even if it ends up as a sloppy mess, it’s going to taste pretty amazing, right?
Now, foodie friends, I can tell you’re impressed, so gather round and worship at your new-found altar.