It’s not like this wasn’t expected. One of the (many) good things about living here is that the weather is quite predictable. Stuck on the corner of Africa with literally thousands of miles of ocean almost surrounding us, it’s fairly easy to see what’s coming and warn us about it. And warned we were: 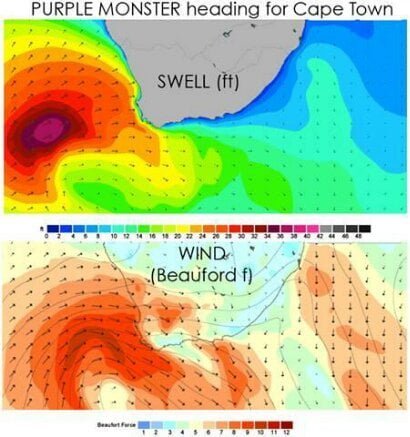 Wind, rain, swell – lots of each of them, which surely means a trip out with the camera tomorrow.

In the midst of all this, I have prepped with homemade soup, cottage pie, pasta “thing” and home-baked fresh bread. Looking good, then.
And then we’re off to Newlands to watch the rugby. Memories of the sleet at Italy v Paraguay in 2010 spring to mind.
I’d rather be in the stands than on the field, but right now, I’d rather just watch it on TV and enjoy my soup.

If you have been in or around the Western Cape over the past couple of weeks, you can’t have missed the rain we’ve been having. It’s caused floods, landslides, death and misery. However, on the bright side, it has also filled up our dams nicely.

But it was only when I read the City’s weekly dam level figures, published each and every Monday, that I realised just how much it had filled up our 6 local dams. 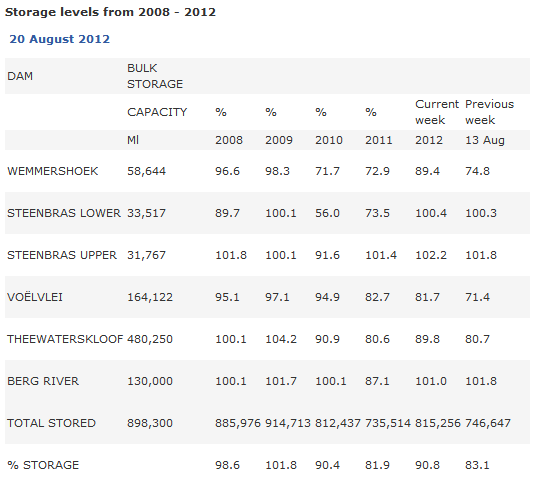 It’s the last two columns you want to look at – this week versus last week – indicating that the percentage storage in our dams has increased by 7.7% in just 7 days. That’s good news, as we need the water for our long dry summer (remember that?).

7.7% is quite a lot, incidentally. I’ve been doing some rudimentary calculations (while fuelled by Diemersfontein pinotage) and it appears to me that we have almost 69 billion more litres stored than we had this time last week. 68,609,000,000 litres to be exact.
That’s enough to fill 27,443 Olympic size swimming pools, although if you were to actually do that, I wouldn’t be allowed to water my garden in February.

Look, it has been raining a fair amount in Cape Town over the last few days. This is to be expected. Cape Town’s 3½ annual months of winter have begun and September and the spring that it allegedly brings with it seems a long way away right now.
Kirstenbosch had over 50mm of rain yesterday and they’ve added to that with some frighteningly heavy stuff overnight.

So what will the rest of the week bring?
Step forward the South African Weather Service website:

Not great, hey?
But then check out that rain for tomorrow. A 30% chance of 6.8mm. 6.8. Six. Point. Eight.
Not six point five. Nor seven point zero.
Nope: to go with Steers’ infamous Wacky Wednesday – the day each week upon which one is able to purchase twice as many of last week’s least popular burger than one could have done last week for the same money as one would have spent on said burger the previous week if one actually had any inclination to buy it – SAWS have made tomorrow Super Accurate Tuesday.

I’ve done some rudimentary calculations and I reckon that to increase the height of the rainwater column collected in a standard pluviometer (which would have an 8″ or 20.32cm funnel arrangement), you would need around 67 large (3.6–5.1 mm) raindrops.
Now that might seem a lot, but when you think about how many raindrops fall in the average heavy shower (we’re talking literally hundreds of millions), it’s really not.

This suggests to me that either SAWS have invested heavily in highly accurate and expensive rain-measuring equipment (when really the money would have been better spent on a decent website) or, more likely, that they are just messing us around and we can actually expect a whole 7mm of rain tomorrow.

Meanwhile, in other weather news on the SAWS site, be on the lookout for NW winds gusting to 51.358kmh which may result in waves with heights in excess of 7.046m between Cape Columbine and a specific rock 1.967481km west of Plettenberg Bay.

Winter has suddenly and viciously arrived in Cape Town. Just [does the maths] 72 hours after that sublime day out in Franschhoek, with its cloudless skies and 27 degrees, there are suddenly many inches of rain and a plethora of Beauforts. The pressure has dropped below 1000mb for the first time this year and the temperature is only just troubling the mid-teens.

Of course, this is actually no great surprise. Winter comes in May and this is May. It happened last year around this time and again the year before. Personally, I can see a pattern emerging, but that’s probably just down to my intensely-trained scientific mind, so don’t worry if you haven’t spotted it yet.
However, the moaning has started already. This is also no great surprise. Despite the fact that there are plenty of great things to do in this weather (hide under blankets, drink buckets of red wine, watch World Cup football), there are two activities that Capetonians are unable to do in the cold and rain: go to the beach and drive.

The beach thing is fairly obvious. One goes to the beach to enjoy the sun, the warm sea air and the chicks in their bikinis.
One does not go to the beach to get hypothermia. Not even the Brits do that. So, no. No beach in this weather, thank you very much.
The driving thing is more mysterious. It has been well documented that the phenomenon occurs, but no-one is really sure why. And there’s no one way in which Capetonian drivers get worse when it rains. It seems to be that they just do everything rather badly: no indicating, late braking, nipping through red lights, crossing solid white lines, complaining about how other people can’t drive etc.
It’s like everyone suddenly thinks they’re driving a BMW.

This appalling roadsmanship obviously has a profound effect on the traffic flow around the city. When it rains, my journey to work will take twice as long as usual or even increase by as much as 100%, time-wise. And I really don’t think I can be the only one who experiences this. I’ve done some rudimentary calculations and worked out that when it rains, businesses in and around Cape Town lose out by a really big number of Rands because their staff, supplies and deliveries are all caught up in the traffic.

It’s at this point in many blog posts that one might expect to find a few suggested solutions to this problem and who am I to disappoint. Having been daubed with the paintbrush of positivity after seeing what has been managed by local engineers in the form of the all new Hospital Bend and the magnificence that is the Cape Town World Cup Stadium, I now believe they can do anything.
Which is why they can build the huge sponge on the top of Table Mountain.
If I was better with Photoshop (OK, if I even had Photoshop), I’m sure I could show you just how that would look. As it is, you’ll just have to imagine Table Mountain with a sponge on top of it. A huge one. Probably in yellow.

Hopefully, this would absorb any rain that was due to fall on any of Cape Town’s roads and would thus prevent the entire city driving like tossers on wet days. The obviously massive costs of this huge project would be offset by the enormous financial benefits to the city of people actually being able to get to their offices and start work before ten o’clock.

Add a really big heat lamp and we could solve the beach thing too.