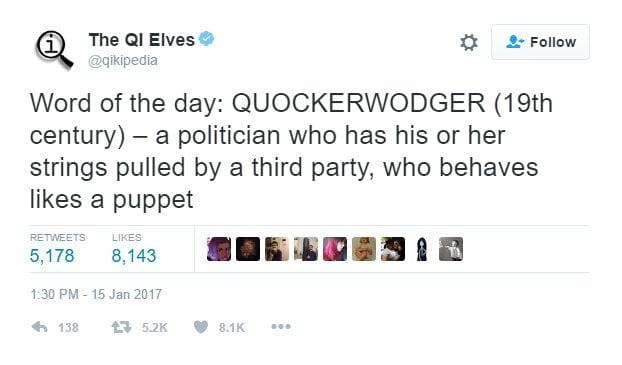 No need for any introduction here.
(Although, yes, technically, that was one.)

Tears of laughter. The guy is a genius.

This comes from the QI website, so I’m fairly convinced of its veracity.

There are thousands of landmines in the Falkland Islands, laid in the 1980s by the Argentinians, which have been a boon to the Islands’ penguin populations, who are too light to set them off (sadly, more modern landmines can be set off by the change in temperature caused by a shadow falling on them, so any penguins in Afghanistan wouldn’t get away with it). The consequent lack of humans in the Falklands means that their populations have rebounded after the decline caused by whaling ventures.

When they did stay on the Falklands, whalers needed fire to turn the whales’ blubber into whale oil. As there aren’t many trees there, whalers would simply burn the penguins, which have highly flammable fat beneath their skin.

Now we know. And now we’re off to Boulders Beach to see if you can actually use a penguin as a firelighter.

Penguin facts, eh? You can never have too many of them.

I was watching an old episode of QI last night and it struck me that I should probably watch a whole lot more episodes of it. While the comedy doesn’t always work, the facts are… well… Quite Interesting.

It’s an admittedly small sample (n=4), but the scientist in me noted that homosexual individuals seem rather susceptible to isiXhosa click singing. I’m not homosexual, nor am I particularly good at click singing, but this fact may be of interest should you be “on the pull” for a same sex partner at some pub or club this evening.

It’s good to see a bit of SA culture (yes, I’m aware that it’s Trevor Noah and I’m stretching it a bit here, but…) on entertaining, quality, prime-time UK TV.

I was watching “Brand New” QI last night (actually turns out to be over 3 years old, but still) and this section had me in tears of laughter.

David Mitchell and Sean Lock are a recipe for success anyway, but the images conjured up in answering this question were just brilliant.