When there’s not much serious news around (or maybe when there is, but you can’t bring yourself to face up to it (see the opening lines of yesterday’s post)), you end up getting stories like this:

I have to say that for this to have made the national press in the UK, someone must have been trying very hard (no pun intended) to avoid anything to do with politics, the economy or ISIS, because it only really looks a bit like a PENIS. In my humble opinion, anyway. Limited experience. And stuff. Perhaps see a doctor if yours looks like that. I dunno. We move on.

Of course, Cape Town is far less racy than Northampton. No news site here is going to share images of cuts of meat which vaguely resemble male genitalia. No, when we’re avoiding real issues, we talk about the stiff breeze blowing through the Mother City yesterday, with what might just be the biggest non-“news” story ever: 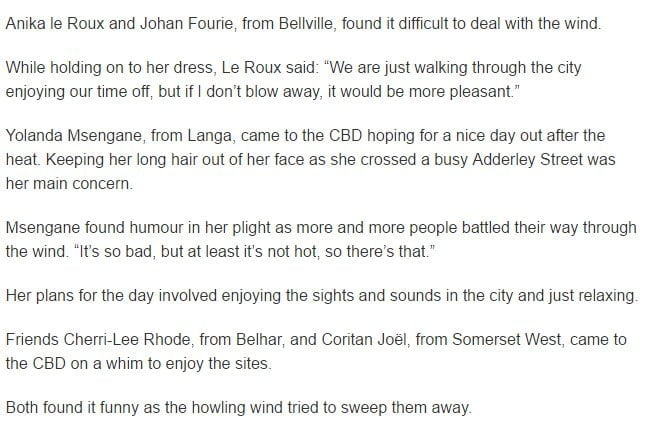 Some people come to Cape Town CBD.
It’s rather windy.
They’d rather it wasn’t.
Soon it won’t be.

It’s almost enough to drive you back to all the dramas of the real world.
Maybe that’s the idea.