Filing under Interesting, Really Rather.

After the three way tie for second between Michael Phelps, Chad Le Clos and László Cseh in the 100m butterfly, you might wonder why the swimming authorities don’t work to thousandths rather than hundredths of a second to separate these athletes. 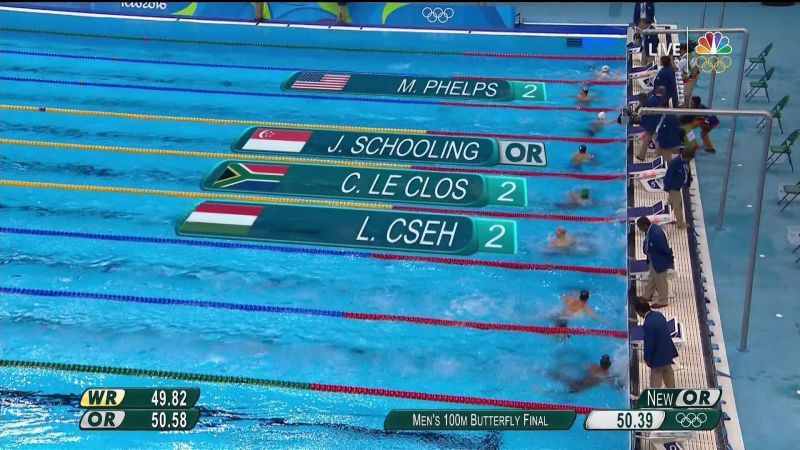 Well, the simple answer is: they can’t.

In a 50 meter Olympic pool, at the current men’s world record 50m pace, a thousandth-of-a-second constitutes 2.39 millimeters of travel.

And while that might not seem like a lot (because it isn’t), we are talking about the best swimmers in the world, at the most important swimming event in the world, so these tiny margins count for a lot.

The trouble is, while our swimmers are pushing boundaries all over the place, our pool builders haven’t quite attained the same sort of levels.

Attempting to construct a concrete pool to any tighter a tolerance is nearly impossible; the effective length of a pool can change depending on the ambient temperature, the water temperature, and even whether or not there are people in the pool itself.

Of course, there are some sports that do time to thousandths of a second – like track cycling and bobsleigh – but the important difference here is that all the athletes compete on the same track. No danger there of Lane 4 being 3cm shorter than Lane 5 (or whatever). If the track isn’t quite the correct length, well, there’s no advantage for any one athlete: it’s the same for everyone.

One anomaly here: speed skating: Yes, they use the same track, but they’re so backward in using a starting pistol to begin races that some competitors definitely start at a disadvantage…

Samsung are known for some good stuff (I have a lovely Samsung TV) and some not so good stuff (Mrs 6000 has appalling battery life) (on her Samsung phone, that is). (Mrs 6000 doesn’t have batteries.) (She runs on wine.)

And now, Samsung are going to be known for this advert ‘The Anthem’, which you’re going to be heartily sick of by the end of the Olympics, but which you’ll like right now. Goosebumps time.

Local folk will recognise that some (or more) of this advert was filmed in Cape Town. But that’s actually beside the point. This is just a very nice advert which almost makes you forget the terrible FUBAR state of the world at the moment.

I was reading this article (which I linked to from here) when I spotted this article and I thought it was worth a look.

Ricardo Blas Jr: Competing in the +100kg judo, Blas Jr. is a whopping 34st5lbs – more than 10st heavier than any other athlete in the whole Olympics and 6st10lbs heavier than the entire Japanese women’s gymnastics team put together.

They make them big in Guam. 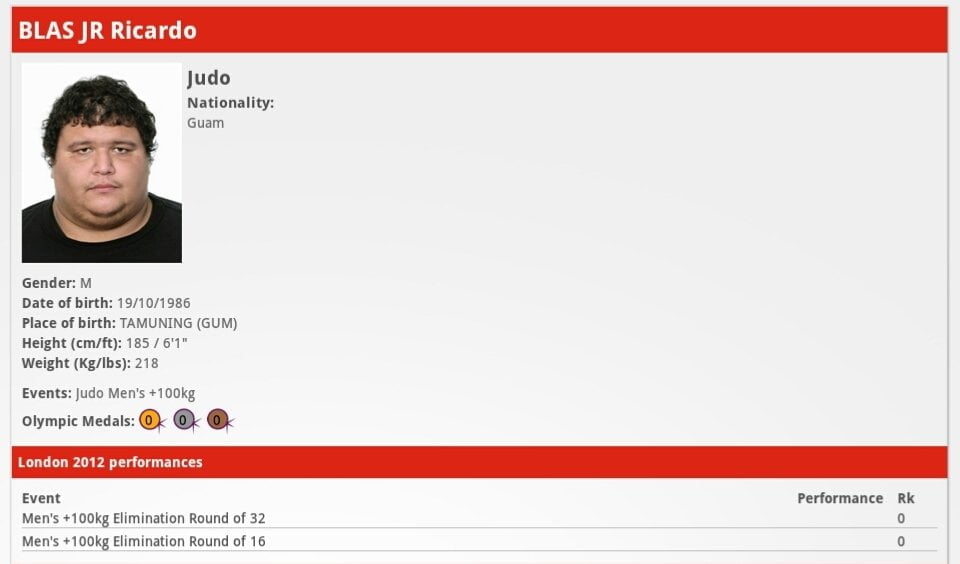 Popping that into metric for you, Blas Jr’s page on the official London 2012 Android app states that he is 185cm in height and… er… 218kg. That’s 63kg heavier than the 203cm tall Rafael Silva of Brazil (also a judo competitor), who is just a puny 155kg. Pfft.

And talking of that Japanese women’s gymnastics team, step forward Asuka Teramoto in that Japanese team: 21 years old, 136cm tall and 30kg. So less than one seventh the weight of Blas Jr and about 4kg heavier than my 6 year old son.

Now that their respective events have been completed, I would pay big bucks to see Blas Jr and Teramoto swap sports for an entertaining demonstration session.
Please could someone make this happen and have the necessary medical personnel on standby?

Yes, I’ve been watching the Olympics and I’ve been happy with Team GB’s progress (once they started progressing, that is), but last night, during a cheese and wine event to celebrate Mrs 6000’s birthday, Sheffield’s own Jessica Ennis taking the gold medal in the Heptathlon was the crowning glory for me. 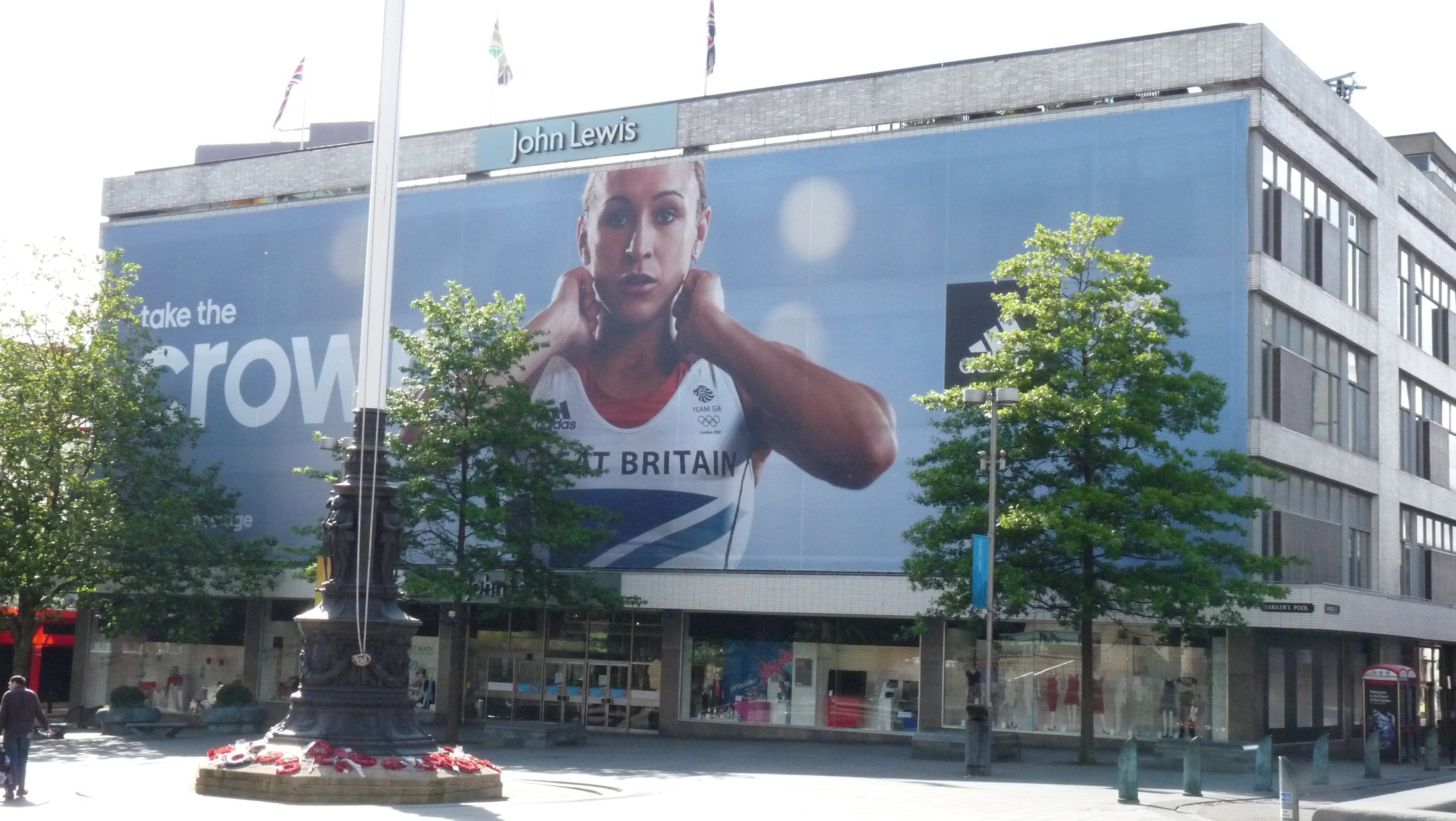 This photo (from my Dad) is the giant Adidas poster which accurately predicted Ennis’ success on one of the stores in the city centre.

Meanwhile, hundreds of local supporters turned out to watch the whole event on big screens at Don Valley Stadium, where Ennis began her athletics career.

Many of these I can answer straight off:

Then last night, she popped the old “Who’s the oldest competitor at the 2012 Olympics?” one at me.

Fortunately, I was able to consult Dave Google and quickly come up with the answer:

Hiroshi Hoketsu, who will represent Japan in the equestrian discipline of dressage at the age of 71 is the oldest competitor in the London 2012 Olympics.

He’s 71. Seventy one. Imagine what the 71 year olds you know are doing during the Olympics. Knitting? Visiting the doctor? Hell, if they can walk unaided to the shops, they’re doing ok.

And his story is amazing. He hasn’t seen Motoko, his wife, for over a year, because he lives and trains in Germany and she lives back in Japan.

It is difficult to be away from home for this long as an old man and I owe everything to her patience and understanding.

But this isn’t his first Olympics – it’s his third. His first, incredibly, was in Tokyo back in 1964 – a full 48 years ago. That, in case you are numerically challenged, is the same as SA swimmer Chad le Clos still competing in the 2060 Olympics. Wor Chad would be 68 by then, so still not quite matching Hoketsu’s age.

This will probably be Hoketsu’s last Olympics:

My wife would like for this to be my last year of competition and that will probably be the case. But I still feel my riding is improving, little by little. That is my motivation. I am a better rider at 70 than I was at 40. Most people can’t tell but my body is getting a little weaker. My horse knows it and she helps me.

But if he did make it to Rio in 2016, he would beat the record of Swedish shooter Oscar Swahn, who won bronze at the age of 72 at the 1920 Antwerp Games.

I know that a 75 year old competing in the Olympics seems a little far-fetched, but if you’d asked me yesterday, I’d have said the same about a 71 year old.