It’s a website which shares information and developments in North Korean Technology. Latest press releases, new sites, photographs and the like from the secretive state. It’s a pretty interesting rabbit hole if you have some time to spare.

For example, I wandered through to the Korean Stamp website:

Where I tried to buy some North Korean stamps:

The stamp design team of the Korea Stamp Corporation staffed with talented designers who had finished the professional educational course and possess rich field experience is doing fairly well with the design of stamps of different topics, postal stationery as well as the philatelic souvenirs including stamp yearbook, stamp catalogue and stamp albums.

The Korean philatelic souvenirs are winning popularity among philatelists around the world for their rich thematic contents, various types and apparent national tinge.

Indeed. It was the fact that their stamp design team is doing fairly well that made me want to buy the stamps. Well, that and the apparent national tinge. And they don’t come much more nationally tinged than this:

Sadly, I couldn’t get the online shop to work, otherwise I would have grabbed a couple of Kims and a Flying Squirrel.

Elsewhere, there are images of new houses being presented to citizens for propaganda purposes. That happens here too, but they don’t have state radio receivers built into the walls. there is news of a Dynamic Traffic Light System, like we need in Cape Town, and a link to hear North Korea’s Short Wave radio programming.

It’s all a bit haphazardly put together, but then that’s how these sort of states (kind of) function. All in all, it’s an intriguing look behind the red curtain into what is, to most people, a rather mysterious country.

However, this geographical solitude seems to have paid some dividends when it comes to avoid nuclear holocaust: 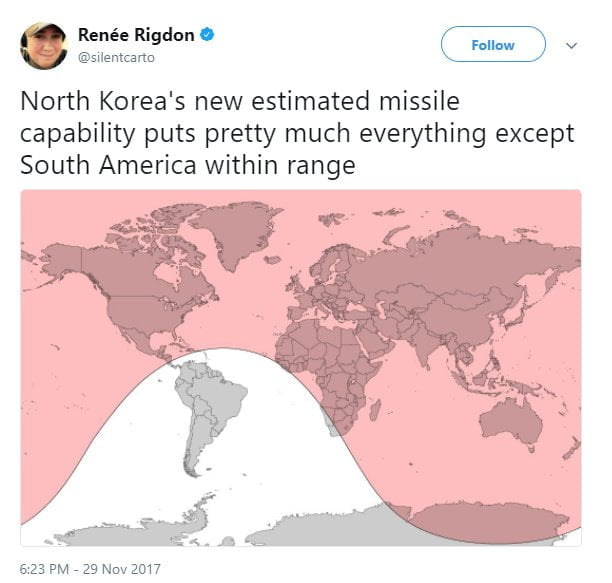 Yep. Unless your Spanish and/or Portuguese is up to scratch, or you really, really like snow, it looks like Cape Town (ok, and a bit of Namibia too) is the place to be once Kim Jong-Un starts throwing his metaphorical toys out of his metaphorical cot.

It’s not my thing, but I do recognise that the drama series Game of Thrones is very much the zeitgeist, and that’s just fine. However, when the UN hasn’t quite got around to calling world leaders together to debate the latest pre-apocalyptic move by North Korea, but they’re still tweeting this sort of thing:

We’ll be having a special meeting of the Security Council to discuss the implications of using dragons in warfare, pursuant to the Geneva Convention.

…I can’t help but think that things have gone a bit far.

Priorities, people. One of these things is actually real.

In case you’ve never encountered this.
I’m told by a friend-of-a-friend on FB that: “Apparently a member of a-ha went there (cant remember why) and took a CD. Within three days the group came up with this arrangement. They had no sheet music or anything other than the CD to work off.”

Brilliant. It’s on accordions, it’s in North Korea, there’s an austere painting and some fake sunflowers behind them and the guy on the right (as we’re looking) can’t stop swaying. And then it ends, abruptly. And there’s no applause.

In my mind, there can be no better example of an 1980’s hit played by a quintet on instruments of the bellows-driven, free-reed aerophone family in a politically-closed Asian country. And I’ve seen a few: who could forget that cover of Club Tropicana, played on pitch pipes by that 5-piece from Myanmar, for example?

What I can’t understand is why it only has 5,000 views in the three days that it has been on YouTube. This has every single element of  the perfect viral video: we’re obviously just in the incubation phase right now. All of us now have the duty to spread the disease as widely as possible. Admit it, another piece of your life’s jigsaw clicked into place the moment you watched this – what gives you the right to deny others that experience? Who made you god?

alas, not every Norwegian is a member of AHA, and there has been more than a million YT hits tinyurl.com/73yfjuh

So it’s a Morten Traavik (and not Morten Harket) that took the CD to North Korea. And there’s the full story (and an epic photo of him) on the BBC page via that link.

Off to have some more tests done today as the local medical profession charges me exorbitant rates to find out why I’m feeling so crappy (although I think we may be getting somewhere now). So I’ll leave you with this collection of photos from Inside North Korea:

Earlier this year, David Guttenfelder, chief Asia photographer for the Associated Press, along with Jean H. Lee, AP bureau chief in Seoul, were granted unprecedented access to parts of North Korea as part of the AP’s efforts to expand coverage of the isolated communist nation.  Though much of what the AP journalists saw was certainly orchestrated, their access was still remarkable.

And there are some great photos via that link above:

If I had a bucket list, DPRK would be on it. But with a battery of invasive medical tests ahead of me, I think I’ll settle for just getting this blog post out for the time being. Aim low, keep happy.