News 24, never known for the quality of its commenters (well, not the good quality, anyway) hits a new low with this gem:

From this story, I felt it needed recording for posterity.

Until we actually have hard facts instead of supposition and rumour, I’m steering well clear of the whole Lonmin/Marikana issue. However, if like me, you’re searching for those hard facts, it seems that the mainstream media isn’t the place to be looking.
There’s a surprise.

Whichever side you’re on, you surely can’t help but feel some pity for the rock drillers who – as we’ve been told here, here, here, here and here – earn just R4,000 per month. How one can survive, let alone support a family, on that amount is beyond me.

Except that Politicsweb has now alleged that the oft quoted R4,000 per month figure is actually some distance from the true amount earned by the Marikana rock drillers:

It was left, not to a journalist, but to Solidarity deputy general secretary Gideon du Plessis to go and find out the actual figures. In a statement issued on Monday he reported “The adjusted total cost package of a Lonmin rock drill operator is approximately R10 500 a month, excluding bonuses.”

In response to a separate query from Politicsweb Lonmin’s Mark Munroe Executive Vice President of Mining, basically confirmed these amounts. He stated: “Lonmin’s Rock Drill Operators earn in the region of R10,000 per month without bonuses and over R11,000 including bonuses. These levels are in line with those of our competitors and are before the wage hike of some 9% which will come into effect on 1 October 2012.”

If this increase applies to the whole compensation package it would push gross earnings – with and without bonuses – to between R11 000 and R12 000 per month. The net income of rock drill operators may well be considerably less than this – after deductions – but this is the cost to company.

If these figures are correct, it makes it even more bewildering, bizarre and tragic that so many lives were lost in search of what amounts to a R500 per month increase.

As the Politicsweb piece states:

One has to ask why no-one in the world’s media appear seem to have bothered to verify the R4 000 figure… Given the critical nature of this information for any analysis of the strikers demands it seems like a very basic mistake.

Meanwhile, South Africa’s news24.com seems to have evidence (via Al-Jazeera) that police were indeed fired upon before opening fire upon the protestors. The video is worth a watch.

I’ll leave the decisions as to whether R10,000 per month plus bonuses is an acceptable wage or whether the two shots apparently fired at police merited their response up to you. But wouldn’t it be nice if the journalists paid to report facts, actually reported facts?

Yes, I clicked through on this Sport24 story thinking it had something to do with Sheffield United. It didn’t.

Instead, I learned that Hugh “Blades” Bladon had been voted SA’s favourite rugby commentator in a poll on the Sport24 website.

Apparently Hugh’s was a “landslide victory”, polling, as he did, 34% of the vote. His win was described by the site as being “fairly overwhelming”.

Can something really be “fairly overwhelming”? Isn’t that like being “a bit unique”? Surely when wanting to downplay the meaning of “overwhelming” somewhat, you should just use the word “whelming”?

Amazing. Here I am wondering what to blog about today and then it drops onto my screen, courtesy of News24 commenter Krolie, who took full advantage of an article on the wintery weather (which missed Cape Town almost completely) to vent his or her spleen over a long-standing issue which has clearly caused a lot of pent up frustration:

For the past 20 years I each year bought an umbrella in the hope that THIS time it will do what it is supposed to, but alas, if you exit the door and there is something just stronger than a breeze, your umbrella takes another shape whipping the other way round and well, your next best hope is for a bit of water to use this useless object as a boat of sorts.
Anybody else find an umbrella pretty useless in the WC in the middle of winter? CT is well known for people hugging lampposts, even grabbing towards the closest human zipping past you as if hell bent to win a marthon.
Yip, even your rainjacket ends up not being so protective as it is renowned to do – whipping up and down and all over the place, including the clothes you’re wearing underneath. You might as well put your clothes in a packet, tie it to your body and streak down Adderley Steet, because wet you will be to the skin, no matter what you do. At least you’t hopefully have some dry clothes at the end of your “flight”.

Is Krolie mad? Einstein thinks so:

Insanity is doing the same thing over and over again and expecting different results.

When May comes around, and Krolie heads for the local umbrella shop, is there not some small hint, some glimmer of a memory that when s/he is doing is utterly pointless and has been proven so on many separate occasions over the previous two decades?

I have to say too, that it appears some degree of artistic licence has been employed here. I have never hugged a lamppost in Cape Town – there are always too many posters on them for one’s arms to get a firm grip – nor have I ever grabbed the closest human to me. The latter is an extremely dangerous means of protecting one’s self from the rain anyway. South Africans know how to fight off muggers and you’re more than likely to find yourself lying in a pool of blood, not water, with your brolly stuck somewhere where the sun don’t shine (that’s PE this week).

So people, do not buy an umbrella in the misguided hope it will keep you dry in Cape Town’s wind. And do not streak down Adderley Street. It’s not clever, and in these sort of meteorological conditions, it certainly won’t be big either.

While the cricket is on at Newlands, News24 have been trying to keep up with the (apparent) final throes* of South African (previously) fast bowler and all-round sporting ambassador, Makhaya Ntini’s test career. With limited success.

One of the great things about internet news sites is that they are updated with every single new piece of information that comes along. Thus, you get lovely anomalies like this one in the Sports headlines: 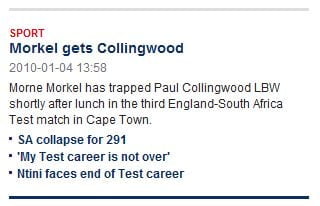 As News24 report– it’s all over for Ntini because he’s signed a contract with Middlesex. And then Ntini denies that’s the case. And both are reported.
It used to be the case that the Daily Mail newspapers could hide those embarrassingly incorrect stories by simply just publishing the best information they had to hand at deadline. But in today’s fast-paced world of internet news, it remains there; rudely demonstrating how inaccurate the journalists were.

As for the cricket, it’s been a hugely exciting day at Newlands. But I’m not there – saving leave for real sport in June and that little trip in December.