Time to come clean. They’re onto us. To be fair, we had a good run; in fact, I was amazed that we managed to get away with it for so long, but the inevitable end was… well… inevitable.

An admission: My MSc project, allegedly on Multilocus Sequence Typing of Streptococcus agalactiae, was actually just a cover for my research into putting brain-eating nanobots into vaccines. 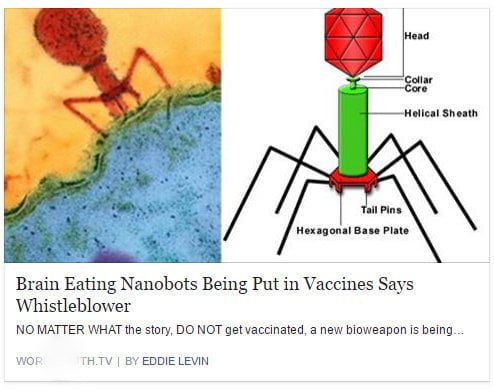 Oh dear, I seem to have accidentally wiped the name of the website out.

Of course, even if you have a basket full of brain-eating nanobots and several litres of vaccines, you can’t just lob the two together and hope for the best. Our Illuminati Overlords would never allow that. Usually, you’d start a major project like this with some small scale testing, but nanobots are pretty small anyway, so we had to start with large scale testing and then work our way down. First, we began piping beagles into homes via the water reticulation system in Singapore (who could forget the Singapore Mass Beagle Outbreak back in 1999?).
The unqualified (and unexpected) success of that part of the project allowed us to go smaller, and yes, as you’ve probably already guessed, it was our laboratory that was behind all those acorns people discovered in their Starbucks coffee in Florida in 2001.

Sadly, we weren’t counting on the amazing detective powers of one particular keyboard warrior fighting against our imposition of a New World Order. He’s got us banged to rights and no mistake. Jim Stone – who has been a constant thorn in our side since I first heard his name earlier this morning – has also told you (often using occasional BOLD TYPE and capital letters) about how Zika virus was dropped from helicopters, how UFOs ABDUCTED flight MH370, how the recent mix-up at the Oscars was due to a Wiccan spell DESIGNED TO ATTACK DONALD TRUMP, that Antarctica is being evacuated (presumably not a hugely lengthy process) so that aliens can land there, and that Nelson Mandela DIED IN PRISON, there was a $250 banknote and COWS HAD (or is it didn’t have?) HORNS in his (Stone’s) other life.

On that last one: yes, really – and it includes the brilliant opening line “When I was a kid I lived in a semi rural area and had a lot of exposure to cows.” (And then the murders began?)

Anyway, I think you can now see that the brain-eating nanobots in vaccines exposé is just one of many blows that Jim has stuck against the clandestine establishment which tells you what to think via popular blogs and the like. It’s just that this one was personal for me because I worked so hard on it. (I had tried to get in on the jet fuel and steel beams experiments, but George Bush only wanted psychologically malleable engineers.)

Anyway, the discovery of the whole brain-eating nanobots in vaccines thing has all come too little, too late. Everyone is already full of vaccines and brain-eating nanobots, just like Singapore was full of beagles 18 years ago, and there’s absolutely nothing you can do about it.
On the plus side, poliomyelitis is now almost a thing of the past and childhood mortality due to infectious diseases has halved over the last 25 years. Still, this has to weighed up against the MASSIVE increase in deaths due to people’s brains being eaten by brain-eating nanobots.
So, you know, some you win, some you lose.

My thanks to Jim for keeping us honest, and my apologies if you or someone you love has been affected by a brain-eating nanobot. Or an acorn in your beverage while holidaying in Miami.

I obviously can’t give you any details about the project that I’ve been assigned to down here in Cape Town, but it’s got nothing to do with putting microchips in Gatsbys. Absolutely nothing.
So much so that you should probably forget that I even mentioned it.

Which I didn’t. Right?