My wife is pretty amazing.
True, she’s made the odd poor choice in her life [waves], but she really is the glue that holds this family together and keeps us all going. I try to tell her this a lot, but I’m never sure that she knows just how much she is valued and appreciated. Maybe she’ll read this, and then she’ll understand.

Equally, of course, I try to do what I can as well, and it’s worth pointing out that as a complete control freak, she’d probably not let me take over too much anyway. But we’re very, very lucky to have someone so willing, so strong and so able to lead our family.

And especially so now, with me stuck in bed with this leg [points] stuck up in the air like a lower limb Nazi salute.

Talking of… how on earth am I going to make it through tomorrow? It’s basically entirely sport-free. Without football, second-rate rugby and third-rate cricket, I imagine that I’m going to be quite bored. I have made sure to leave my music transfer to do then, and I’m sure I can catch up with some work stuff too. I’d much rather be up and about. But that would be counter-productive.

But I have to say that mindless Supersport viewing has kept me going this weekend, and there’s not going to be any of that.

It has started. It started this weekend. Subtly.
It started on the way to the Beagle Run.

We’re heading to my homeland soon, and whenever we do that, there is mention of the prevailing meteorological conditions over there. There has to be. It’s the law.
During previous visits, we’ve had an occasional glimpse of blue sky, a lot of rain and even some snow. Oh, and then that fortnight where it never got above or below 3ºC and was just… very grey.
I didn’t bother with photos that time.

The weather in the UK isn’t as nice as it is in Cape Town. You know that. I know that. But Mrs 6000 still likes to remind me of the anguish her body – which is a Capetonian body – is inevitably going to have to suffer while we’re over there.

It started this weekend.
It started on the way to the Beagle Run.

At 7am on Sunday morning, somewhere near Klapmuts, she asked what the temperature was. It was 11ºC. A bright but chilly start to the South African day. I told her that it was 11ºC, despite the fact that she was driving and had the thermometer reading directly in front of her on the dashboard. Sometimes it’s just easier to play along. Because we both knew what was coming next.

And what’s the maximum temperature in Sheffield today?

She asked, thus fulfilling the prophecy.

We both knew this, because just the previous evening, we had spotted the UK weather on Sky News, and had remarked on how it was going to be 13 in Sheffield the next day. So my answer was just for confirmation, and to allow for the mathematically simple, but utterly essential, next line.

So, just 2 degrees warmer than it is now, then?

Wow. Just two degrees warmer. And it’s only 7am here.

And we were done. For the moment at least. The weather in Sheffield isn’t as nice as it is in Cape Town. But then, in its favour, Sheffield has water. Decent internet. Great football. Proper relish. And fewer beagles.

Don’t get me wrong. Cape Town is great too. I love Cape Town. Mountain, beaches, Milk Stout, braais, Cape Agulhas (not strictly Cape Town, but you get my drift, right?). Yes, Cape Town has lots of good things too.

It’s almost as if each city has some positives and some negatives.
Incredible.

Apparently, one of the negatives about Sheffield is the weather. But I grew up in Sheffield. The cold doesn’t really bother me.
Although, I’ll admit that I’m actually quite glad we’re not going this week:

Storm Aileen is expected to bring very strong winds with gusts of 50-60 mph on Tuesday night and into Wednesday morning. The worst of the winds, with gusts to 65-75 mph are expected to be across North Wales and the North Midlands. Longer journey times by road, rail and air are likely, with restrictions on roads and bridges. There is also a chance of power cuts, and damage to trees and perhaps buildings.

Weather-wise, all I really need while we’re there is a couple of days of calm weather to fly the Mavic. Anything else half-decent will be a bonus.

And then we can come back home and thaw. 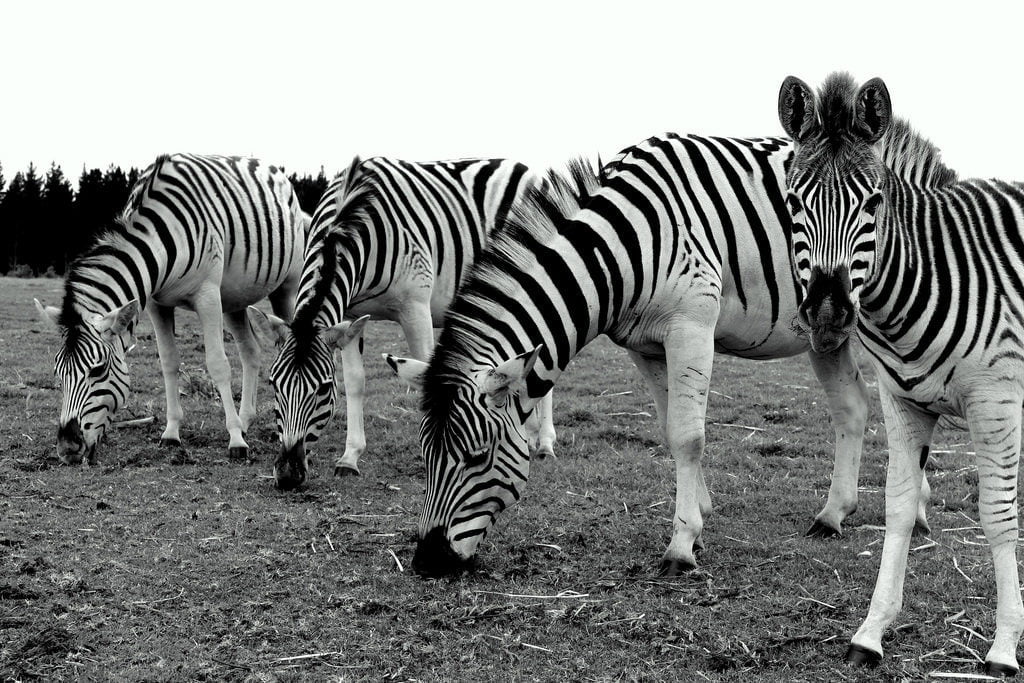 Yes, they have zebras there too. Mrs 6000 took many amazing photos of the elephants too, and I will be uploading them to Flickr. [UPDATE: Done! Here.] But this striking (previously variegated) image of these four chaps jumped out as an immediate favourite of mine, and that’s why it’s up here first.

In great news for the shareholders of Grundheimer Schnauzerbeagle (Pty) Ltd and all the other pharmaceutical companies out there, I have infected my wife with my lurgy.

As the first signs of my recovery shone brightly like a light at the end of a two day long tunnel this afternoon, Mrs 6000 came home from a tough day at the office (and beyond) with a look that suggested germs, disease and – almost certainly – infection, had taken hold.

My insistence that I was merely testing the theories of Lister, Pasteur, Koch et al. (and al‘s theory was particularly good) don’t seem to have impressed her much. I may be in trouble here.

Still, it was just yesterday that she was telling me how good it was that I was ill this week, “getting it out of the way” before we head off on holiday next week.

Maybe if I tell her how fortunate she is to be feeling so rough right now, it’ll make her feel better.

Yeah. I think I’ll go do that now.

And by that earlier post, I mean this one. It was only when I sent the concert information to Mrs 6000, who was looking forward to our Bergen trip , that she put two and two together and worked out that the concert in question was to be staged outdoors.

Perhaps it was this bit that did it:

Remember that you should at outdoor concert! Dress practical and according to weather conditions. Check the weather forecast! Wear comfortable shoes, there are long standing. Do not forget that the concert will take place in Bergen and dress accordingly. If there is a chance of rain, bring a raincoat, then the umbrella is not allowed in the concert area.

Google translate with the assistance there. I can see we’re going to be playing with that a lot while we’re away: Min norsk er forferdelig. My English isn’t much better.

But that line about “dress accordingly for Bergen”? Well, that would be because of this sort of stat:

Compared with Sweden and Finland, Norway has a much more humid and rainy climate. It is impressive to note that the precipitation in some areas of the country may reach the impressive 3000 mm per year, which is one of the largest quantities in Europe.

Here you can find the city of Bergen, which is considered to be the rainiest city on the continent.

Bergen experiences plentiful rainfall in all seasons, with annual precipitation measuring 2,250 mm (89 in) on average.

Cape Town’s annual average is about 450mm. Exactly one fifth as much.

It’s still a way off to the concert (in weather forecasting terms), but I can tell you that the weather in the lead up to the main event looks somewhere between utterly dismal and bloody awful. It’s cold, it’s wet and it’s windy. Add the wind chill and the temperatures are remarkably stable at 1ºC. Having grown up in Yorkshire, I am untroubled by this sort of thing. Having grown up in Cape Town, Mrs 6000 is less keen on the whole “chilly weather” thing.

The Norwegian for “divorce lawyer” is “skilsmisse advokat”.