Much mirth and merriment yesterday as DA leader Mmusi Maimane told us all how “he voted for Mandela” back in the 90s. Trouble is, Mmusi was only 13 in the only presidential election in which Nelson stood (in 1994). Mmusi was old enough to vote in the following election (1999), but Mandela had already decided to move over by then – the ANC candidate that year was Thabo Mbeki.

A politician, lying? Colour me utterly flabbergasted. And wow, just a bit of a faux pas right before an important election. The ANC jumped straight in on it and it spawned the (actually rather amusing) #ThingsMmusiDid hashtag on twitter (I may have even joined in a bit).
But whatta mistake-a to make-a!

That’s why Phillip de Wet had to listen again:

Joke or no, #ThingsMmusiDid had me doubting my recollection. So I went back to the tape.

But let’s not let the truth stand in the way of a good story. And that’s why I’m just putting this out there. Not because I’m a DA fanboy: merely because of the Trevor Mallach effect. And that quote, ironically by the Mmusi-supported Thabo Mbeki:

It seems to me that the unacceptable practice of propagation of deliberate falsehoods to attain various objectives is becoming entrenched in our society. I also call on all of us as leaders and citizens critically to reflect on this practice in order to avoid the entrenchment of a culture which may eventually corrupt our society.

Vote how you want, and why you want. But don’t believe everything you read or hear.

DA leader Mmusi Maimane makes “a keynote speech” on Race and Identity in his party and in South Africa, and suddenly Twitter is “mysteriously” unavailable? 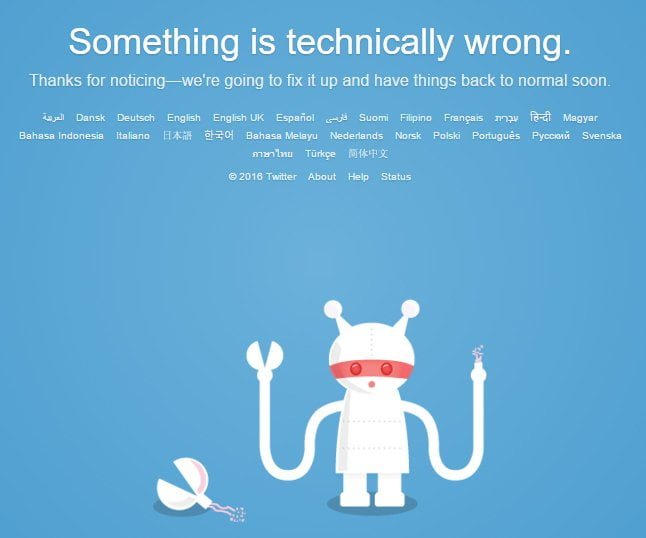 Could it be that the ANC have blocked access so that no-one was able to hear or engage with this landmark address?

Probably not, to be honest.

UPDATE: Still, the fact that this was a worldwide outage hasn’t stopped some people (namely Mmusi’s wife) from thinking the worst:

Tell me how it is that Twitter stops working all over the country for the duration of the speech? #MmusiOnRace

Do you really think they’re that bothered? Really?
Eish. Bit of a stretch.