There is an entire internet’s worth of information out there if you know where to look. There’s actually no excuse for not knowing stuff now if you have a device and a connection. Look at Friday evening for example.

There, up in the Eastern sky (near the top) was Jupiter. I knew this because I’d wondered what the shining star in the East was over the weekend, and I’d looked it up, before looking up at it.

As a bit of a demo, we got the tripod out, aimed and shot, hoping to get the four Galilean moons in the picture. It’s a quick and dirty image: I suppose I could have Googled for the best settings for this sort of thing, but as I say, this was a quick post-braai thing, and – much as I knew that the moons might be there – I picked the settings from my experience, rather than finding a site on the net.

Here’s what we got:

It’s not going to win any awards, other than maybe the one for demonstrating the four Galilean Moons of Jupiter to a few kids (and a couple of adults) after an early evening braai.
If I had tried harder or had more time, I could have done better, but that’s really not this was about. This was “That one there is Jupiter. Let’s see if we can see its moons and then get back to standing around the fire before I fall asleep.”

But then come the questions: How far away is that? How long will the light take to reach us? Which moon is which?

I can do a medium-rare rump over the coals and I can manage some functional camera settings, but I had to turn to the internet for these answers.

Currently, (current to when this was taken) Jupiter was 627.85 million kilometres away. That’s over four times the distance to the sun. I did a rudimentary calculation and that means that with light traveling (as it does) at 300000km per second, the light from Jupiter takes 35 minutes to get to us.
We’re essentially looking at a snapshot of Jupiter as it was just over half an hour ago.

But which moon is Io, or Europa, Ganymede or Callisto?
Well, surely there isn’t a site that can tell you that for any given moment?

Of course there is.

All I had to do was to pop in the date and time that the image was taken, allow for our longitude, and make sure they knew I was using an Erect System (stop it).

So, from the top down on our photo are: Callisto, Europa, Io, Jupiter and Ganymede. All taken from a well-lit suburban back garden, with a basic camera and lens, and all informed by the internet.

It’s not just there for being shouted at by anti-vaxxers.
Some of it is quite useful.

Ah, the words of scarlet Pixar hero Lightning McQueen there. 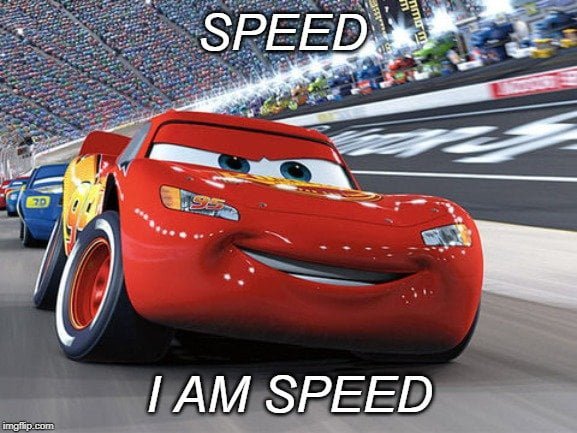 Yes, that’s him. See how he gleams.

It’s March 1st and we had a rather inauspicious start to our new contract with our new ISP as no-one at their end remembered to switch us on. Bit awkward. 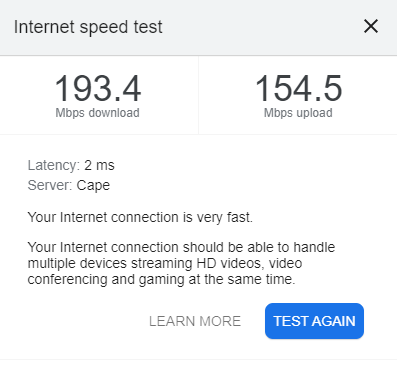 Which was… is… well…

see below for when I actually get some login details and manage to sort out a wired connection. Lightning McQueen is going to be left in my metaphorical digital dust. 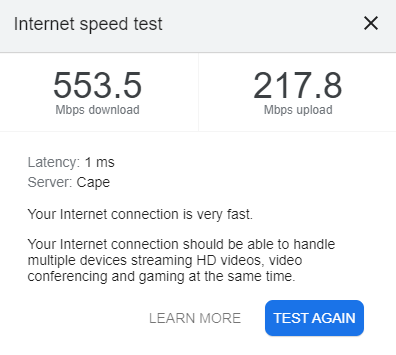 Those internet hamsters are running their little wheels to destruction.

There’s likely to be a lot more loadshedding coming our way over the next few months (and beyond?). So we purchased a UPS to keep (some of) the internet going so that the kids could continue to do their schoolwork while we got loadshod. But as soon as we bought it, Eskom said that actually, everything was ok and there wouldn’t be any more loadshedding that day.

Unperturbed, we plugged in the UPS and immediately, Eskom said that there was going to be some loadshedding again. I’m not saying that it was our fault that there’s loadshedding, but it probably was. Well, that and the years of corruption, mismanagement, looting and general negligence. So not all our fault then.

Anyway, I’m writing this on UPS-powered internet, which – for the moment at least – seems to be working exactly as we had hoped. Even though the kids have finished their schoolwork for the day.

Let’s see if it can last the 2 hours.

UPDATE: Hmm. Iffy. Switched off halfway through loadshedding for no apparent reason. And the supplied voltage and battery levels were all over the place. Better than nothing, but far from perfect.

We’re running a few more tests on it, but I don’t think this is the droid we’re looking for.
A return seems imminent.

We’re not even two thirds of the way into this extended lockdown thing (which may well be extended again) and I’ve just finished the internet.

All the interesting stuff, at least.
I’m going to leave the other 99.99% for the next pandemic.

What am I supposed to do now?

Maybe I’ll invite loads of people around for a braai like the neighbours have done today.
Oh no. Wait a second. That’s both utterly stupid and totally illegal. Wankers.

Back to the internet then…

Not for me (yet), although there have been some worrying developments.

which is not great when everyone is stuck at home and needs to use the internet. It also almost crashed the blog, which would really not have been good. Although 6000.co.za is hosted locally, when I tried to update a plugin  – a process that usually takes a few seconds – it went to get the update from overseas, got stuck and for a while, I was only able to see:

Briefly unavailable for scheduled maintenance. Check back in a minute.

Fortunately, the blog obviously realised that something wasn’t quite right and reset itself before I went to work with a large virtual hammer in the the back end (careful now).

The update will now wait until there is a decent connection to America (or wherever) again.

Then: the neighbourhood group has been alive with fake news on the current situation. Was that Whatsapp voicenote real (no, it wasn’t), should we clean our bin handles (yes, we should), is that man allowed to walk his dog on the school field (no, he’s not). And then in the middle of it all, this gem:

I have just microwaved our newspaper. ( Saturday one is only one we haven’t cancelled because of poor quality even though quality of Sat is not good either)

For the record, microwaving may or may not kill coronavirus. It may or may not burn your house down as well. Do not microwave your newspaper. Just no.

Finally (for the moment, at least): As promised, I have set up an album called The Lockdown Diaries on Flickr. One photo a day during the lockdown. Don’t expect magnificence: this is just giving me something to do while I’m stuck at home, and I’m not going to get images of mountain ranges, racing cars or herds of wildebees being stalked by lions. My scope is a bit limited, which is why it will be a challenge.