This is a post about pairs of animals. Not since the mythical days of Noah and his big wooden boat have so many animals been paired up – and he didn’t even do it in a blog post.

It’s two, by the way. Two pairs of animals.

The first pair is a hawk and a snake. Sadly, neither of them is with us anymore, after a disastrous electrocution incident in northern Montana, USA. It’s believed that the hawk, fancying a sssssnack, swooped down and picked up the snake in its talons, before retreating to a convenient local power line in order to eat its prey.
Ssssssadly, the snake must have been dangling beneath the hawk and touched one of the other power lines as the bird came in to land. If any hawks are reading this (and they might be, because they have eyes like a… like a haw… well look, they just have really good eyes, ok?), let it be a lesson to you to always hold your lengthy prey somewhere in the middle, to prevent excess danglage.

Both the snake (already in a great deal of peril) and the hawk (peckish (no pun intended), but otherwise largely doing fine), were electrocuted and died. 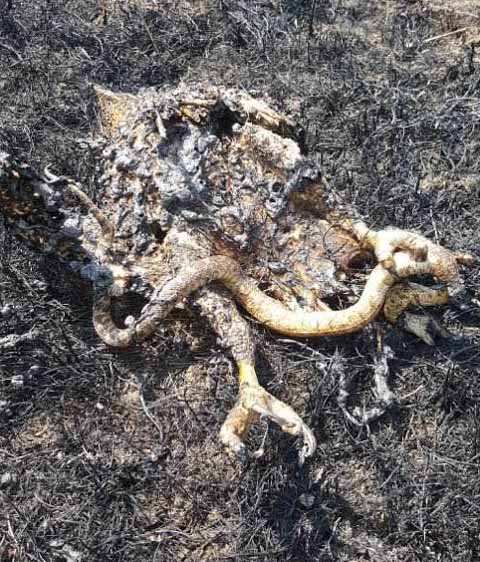 Their still smouldering carcasses then fell to the vegetation below and started a fire which consumed 40 acres of Montana.
Look, if you’re going to go, go bigly.

The hawk and the snake aren’t the only ones to have started fires. There’s a whole list of animal arsonists on that site: squirrels, dogs, pigeons, kites. They’re all at it.

Our other animal pairing is elephants and bees. They haven’t (to the best of my knowledge), been arsoning together. In fact, elephants aren’t huge fans of bees at all, and would much rather stay well away from them, like some pachyderm/apian apartheid situation.

In more than a dozen studies, Dr. King and her colleagues have experimented with beehive fences on East African farms, finding that the region’s indigenous bee, Apis mellifera scutellata, can turn elephants away. A notable long-term trial on farms outside of the Tsavo East National Park found that hive fences deterred 80 percent of elephant raiders compared to unfenced plots used as a control group.

And then, because the farmers need to keep the bees happy to keep the bee numbers up to make the fences effective, they can tap off the honey – which is made by the happy bees – for a second income stream, while reaping more from their original, more traditional crops. Everyone’s a winner.
Apart from the elephants, obviously.

If you have any more interesting (or not) stories about pairs of animals and how they can affect our daily lives (if we’re in Montana or Chad), then don’t hesitate to get in touch and we might even share your tale on 6000 miles…