Scenes from Mpumalanga this weekend: 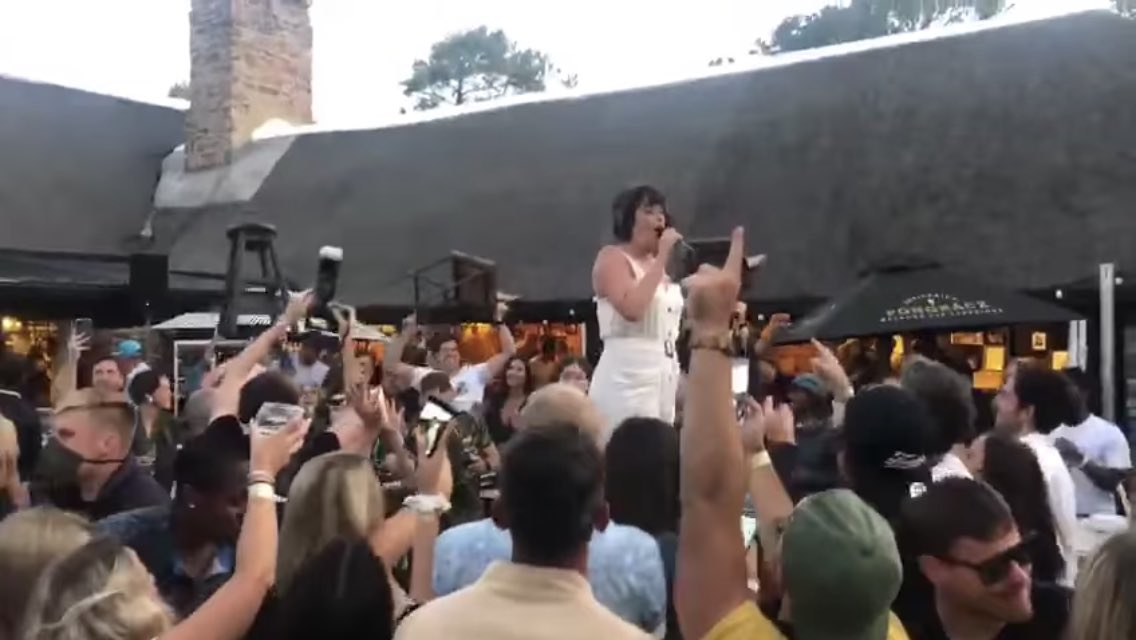 Sidenote: Look at the wonderful, diverse crowds at each event. [rainbow emoji]

The two massive post-Matric house parties in our area this weekend.

And, obviously this absolute disaster:

The Gauteng Department of Health identified 1,322 pupils that travelled to the party.
The department says 1,050 have already undergone testing for COVID-19.
It says 984 of them have contracted the virus.

None of these events (to the best of my knowledge) actually broke any Covid regulations (wait: maybe they did and here). But wow – just look at the numbers right now:

And read the damn room.

Because just because you can, doesn’t mean that you should.

And yet these same people will be the first to complain when more draconian measures are brought in for the festive season in Ramaphosa’s speech this evening.

Well, you had your chance. It’s not like it hasn’t been every lead story on the news and on every front page, be it paper or pixels.

You can’t say that you weren’t warned:

But of course, you did fuck it up. And now we all have to have a totally kak summer.

Well done to Goodluck for this wonderful cover of London Beat’s 1990 hit Thinking About You, and well done again for breaking the mould on the amazing video to go with it.

It’s all wholly implausible, of course. No one leaving Sea Point and heading out into the Cape wilderness to relive memories of a lost love would travel westbound along Rhodes Drive, would they?
And no-one jumping into a Cape farm dam under those sort of grey skies is going to be smiling. We’ve all tried that (albeit not necessarily with a couple of guys who look like they were probably once half of ABBA) and it’s simply TOO DAMN (no pun intended) COLD.
Perhaps a grimace, but certainly not the apparent joyful countenances that we see here.

No. It’s all just acting.
And I’m pretty sure survival blankets were involved at some point soon after the take.

More seriously though, congratulations to  all involved. It feels terrible to have to say this, but thank you for not going down the tried, tested and (sadly) commercially comfortable route of the “traditional” relationship music video.

Yes. I know it’s Tuesday.
Thanks.

With not going away this weekend, I had access to the internet. This is generally a good thing, but not when I’m in the mood for some new music. Wallets (namely mine) start getting thinner. Rapidly.

And now I’m playing catch-up because I have a million new songs to listen to.

Here’s what’s in store (or rather not in the store anymore):

All At Once from The Airborne Toxic Event.
I told you I was going to get this.

REM’s Collapse Into Now.
I’ve been following REM since 1987 and yet their last album, Accelerate, was my favourite so far.  This has a lot to live up to.

DJ Fresh & Euphonik: F.eU Too – In The Club.
Proof that you don’t need to actually have a brain to spin some thumping dance tracks, 5fm’s drive time host and his friend have mixed some catchy anthems here. This was playing while I was in Musica and it was flying off the shelves. Yoav’s We Are Dancing (The Peter Luyts mix), Teenage Crime from Adrian Lux and Hello (the song with the really disappointing video) from Martin Solveig all feature.

Goodluck’s CD, which appears to be called Goodluck.
Buy it now and you’ll get a bonus remix disc thrown in free of charge, which has 3 remixes of Taking It Easy (the über-chilled track we told you about here) and another 3 of their latest offering Hop On Hop Off, which has nothing to do with the Cape Town Sightseeing bus, although that is an option with the service.

Wounded Rhymes – Lykke Li.
A worrying purchase, this.  I based it on one song: I Follow Rivers, which grabbed me with it’s 80’s soundtrack and breathy, yet powerful vocals. Still, what could possibly go wrong when you hear that the artist in question is a 23 year old Swedish indie singer whose music “often blends elements of pop, electronic, and indie rock” and she has a middle name that sounds like shampoo (Li Lykke Timotej Zachrisson)?
And basing an album purchase on one song is infinitely better than basing a purchase on no songs whatsoever and just taking a chance because it’s in the UK charts. I did that with Pala from a band called Friendly Fires. It was pants. What a waste of bandwidth.

I’ll be reporting back on these new purchases as and when I see fit.

In the meantime – what else should I be listening to – and why?
Your recommendations in the comments section below would be appreciated.

Have some South African music – there’s a lot of good stuff around at the moment which deserves more exposure than it’s probably getting outside these borders. I can like to help with that a bit.
This is Goodluck from Cape Town with their catchy tune Taking It Easy:

and that’s exactly what I wish I could be doing right now, but instead of that, I’m having the week from hell.
I knew I should have voted ANC.

More blogging when I get chance.