And by tweet, I mean this one, ridiculing “The ‘third wave’ “:

Look, I get that the increase on the end there wasn’t quite as big as the other two waves (yet), but even before the advantage of hindsight just a few weeks later, we could all see what was coming:

Gauteng took the brunt of an awful Covid day yesterday, with well over half of all the national 8,881 new cases being reported there. The figures were so bad that you could be forgiven for missing them as they leapt by almost 60% in a single day. It’s ok, I’ve got you covered with some detail and a quick MS Paint “red arrow” job.

Yowzers. I believe that is the appropriate clinical expression, anyway.

We don’t have any regional or hotspot restrictions in place and even if we did, they wouldn’t be observed or policed correctly, and it’s too late to make any difference now anyway. We’re in for a crappy few months: the third wave is in full swing (ignore that tweet at the top there) and will inevitably spread from Joburg over the coming weeks, the vaccination programme falls further behind where it needs to be each day, the President and his well-paid Merry Men (and Women) are hugely conspicuous by their absence, and to top it all off, everything – and I mean everything – is hampered by crushingly high levels of loadshedding. We’re due to be without electricity for 7½ hours today.

Still, on the plus side

Let’s (not) lighten the mood with this little gem from the Daily Maverick webinar yesterday, shall we?

People are getting infected at a phenomenally high rate. It’s unbelievable. Not in my wildest imagination did I think people would get infected as much as they’re getting infected right now. What you’re going to see in Gauteng in the next three or four weeks is going to be really frightening.

When scientists and professionals use language like that, you know that things have got a little bit out of hand. He continues:

In Gauteng, like many other places in SA, people are not avoiding crowded spaces, they’re not wearing face masks, they’re not ensuring physical distancing. That has fuelled the transmission of the virus. 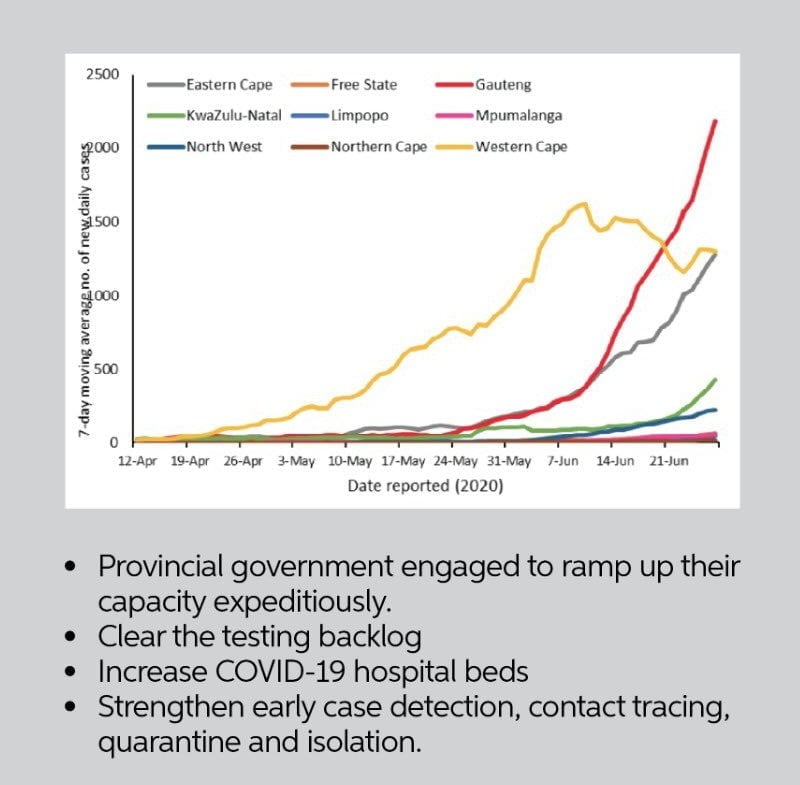 And while just a few weeks ago, they were laughing at us and calling us “Western Cape Wuhan”, they’re now dying in their droves.

Who could have seen that coming?

The rapidly opening economy, now including restaurants, cinemas, casinos and “personal care salons” flies in the face of pleas from the Health Department for people to stay at home. I’m sure that we’ll see spikes all over the country from this, though in the case of Gauteng and the Eastern Cape, they might be well hidden behind the exponential increases there anyway. The bigger worry for the Western Cape now is surely that people think it’s all over and give up any attempt to protect themselves or others.

Spoiler: This is not all over.

Because, as you can read above, even during the worst of it, the number of people choosing not to socially-distance or cover their noses and mouths while out and about, flies in the masked faces of the advice from the experts.

I have no answers. No ways to solve this. We’ve been through it so many times on here. Quite how much more the government can do to communicate the simple steps to reduce the risk of transmitting and contracting Covid-19 is beyond me.

For more and more people, it’s now just getting to the point of protecting themselves and their own families. Only go out and about if you really need to* – especially to anywhere indoors (good practical advice here, remember), because people are going to break the rules, they aren’t going to wear masks and they will come too close to you:

Don’t blame a clown for acting like a clown, blame yourself for going to the circus.

Although I’m very happy to blame the clowns as well.

* I don’t count casinos, hairdressers, cinemas and restaurants in this category (sorry Corné).

Well, this is awkward.

Google Streetview has spotted many interesting things in its time – see Aaron Hobson’s art here, for example – but few things could be more Gauteng than this apparent hijacking caught live in February this year:

Here in SA, where crime is often problematic, the private security industry is booming. Generally, they are quite good at keeping things in check, but the system does seem to be struggling a bit in the image above.

As Gautengers gear up for hefty tolls on their new state of the art roads, those lovely people at ensightnetworks have launched a handy e-Toll calculator so that you can see just how much extra it’s going to cost the Vaalies to get from one place to another.

Obviously, this e-Tolling is going to have a big effect when it is introduced later in the year and so I felt it was only right that Capetonians should also be aware of how much it will cost them to live and drive around the Mother City as well.
I can like to assist with your financial planning for 2011.

We do actually have a toll road in Cape Town – the vastly over-rated and often closed Chapman’s Peak Drive – but since it’s tucked neatly away behind the Lentil Curtain, I’ve chosen to ignore it. Otherwise, your journey from A to B – and quite possibly to C as well – will cost you nothing. But if that’s not quite clear enough, I’ve done some rudimentary calculations and come up with this quick table to assist you:

However, there may be some supplementary costs for Cape Town drivers:

All of which begs the question: Why on earth do people continue to live in Jo’burg?

It’s back to school for many South African kids this week. Not for Alex and his friends in Cape Town, of course. As ever, the Mother City is a little slow to catch up and our lot only go back next week, but Gauteng and the inland provinces are back already.

Stories of boozing on the way to school, desks being chopped up for firewood and a dagga [cannabis] plantation “the size of a football field” in one school yard. And those are just the sensational stories that made it into the newspapers. 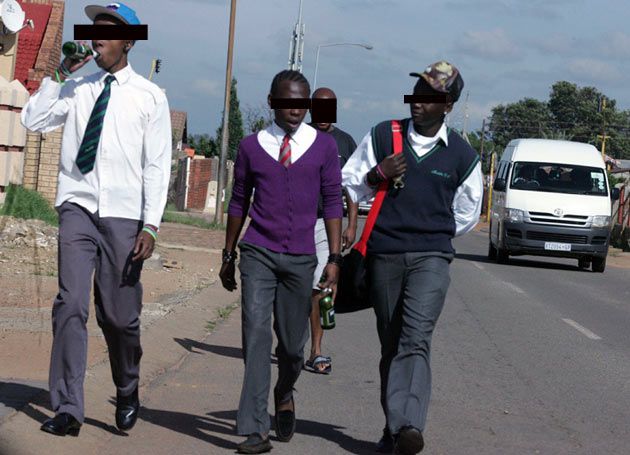 “Hunter’s is the perfect refreshing thirst quencher for any occasion”

Also, I don’t know if anyone has noticed, but they’re also wearing masks. Is that really part of the uniform?
An extra day’s detention right there, I think.

The dagga plantation story was also in the Sowetan along with a picture of the offending crop. Since the paper also named the school, I think you might already be a little late to harvest your share, but if you’re in the local area, then it might be worth a quick recce.
The intergalactic street names in the vicinity of the school in question suggest that the dagga has been growing there for some time – even, like, back when the houses were being built, man. Right on.

We asked people passing by if they were aware that there was dagga at the school and the response was shocking. Everyone knew about the plants. Even a seven-year-old boy said: “I can show you what a dagga plant looks like. People smoke it every day in the yard.”

Give the lad an A for Botany and an F for a bright future. Still, at least he’s learning something.
Meanwhile:

On the front page of South Africa’s largest circulating daily newspaper, the Daily Sun, were photos of pupils from Alexandra High School sitting at the metal frames of what were once desks. According to the report, the wood had been stolen for fire wood.

All of which is highly suspicious, since surely the metal frames would also have been sold for scrap as well. People need money for food, not just fuel for the fire to cook it on.

I don’t know about you, but these sorts of stories don’t fill me with optimism about the forthcoming school year and its chances of success. But then I’m not Charles Phahlane of the Gauteng Education Department, am I?
Because Charles said:

“We are pleased that the first day of schooling in Gauteng proceeded well.”

Which is what is known in South Africa as a Basil Bonner of a statement. Lest we forget, Basil is the official doc in charge of the medical teams for the Annual Cape Argus Cycle Tour who came out with this pearler back in 2008:

Which has to be one of the most inappropriate uses of the words “exceptionally” and “well” ever, in my opinion.

Charles has obviously studied at the Bonner School of Blinkerdom if he can helpfully ignore these drink, drug and desk debacles, although when the media tried to tackle the department on the issues, they was sadly and conveniently unable to garner a response.
Would it be a bit of a stretch to suggest that the department was on a bosberaad, smoking weed and drinking cider while sitting around a campfire made out of Alexandra High School’s desks?

Yes, I think it probably would be.