The 6000 miles… album of 2020 was Future Islands’ As Long As You Are, and they’ve just released a video for the opening track on that album, Glada.
It starts quietly, with some degree of goose involvement:

It’s directed by Julia Ragnarsson, and I played a little bit of Geoguessr as I watched; it was the combination of evergreens and silver birch, a bit of Kite and some interesting pylon design, plus the fleeting shot of half a number plate that got me (correctly, I might add), to Sweden:

“’Glada’ is a song that was written about the exact place that I’m now quarantined, with my parents,” Julia adds. “A song about a past grown over, the coming of a budding spring, and the birds that regularly circle our house and the fields and forests surrounding. We wanted to capture the beauty of nature here, pulling from the images which Sam describes in the song. The ups and downs of a long term relationship. And how you sometimes have to stop and think about how lucky you are, especially in the midst of this seeming breakdown.

It’s a gentle song with a powerful message. And the way the melody opens up into the chorus is just beautiful. Tonight’s braai will definitely be better with a Future Islands soundtrack.

Having enjoyed The Universal Want from Doves since it came out last week, I’m now already really looking forward to Future Islands new album As Long As You Are, due out on the ninth of next month.

Just look at the passion in this performance. Incredible.

And suddenly there are four contenders for the top three spots in the 6000 miles… Album of the Year. To be fair, I’d love it if there were a few more too. Considering the disaster that 2020 has been, the music has been pretty good.

Well, it’s not like the musicians had anything else to do…

I don’t generally do much of Sunday morning. You may say that I am wasting the best bit of the day, but “wasting” is a very subjective term, and if I have the chance to grab a nice, warm, cosy lie-in in winter – well, I’m not going to object. It is after all, “the day of rest”.

So it would have to be something very special to wake me up at 4 o’clock on a Sunday morning, and yet I actually do find myself tempted by this… 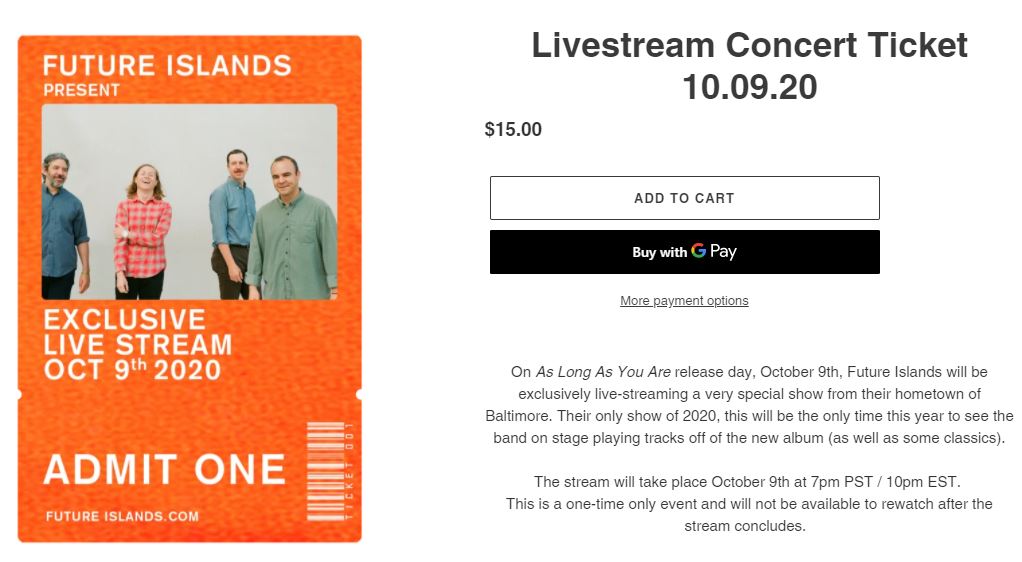 If you are reading this and thinking that I’m hinting at a suitable birthday present, thank you, but please don’t. I’m really undecided on whether this is a thing I want to do – I mean, it is something that I want to do, but whether I’ll feel that way at 3:55am that day… mmm… I’m less sure.

And this is a good thing.

Musically, they haven’t meddled with the formula they’ve been nurturing for a decade. The songs are built around Gerrit Welmers’ rippling synths and William Cashion’s propulsive basslines. And Herring’s still determined to plough all of his rawest emotions into the lyrics.

And more of the bands I don’t like as much, changing tack and doing things that I do like.
That would make the world a better place.

Set in and around a suitably post-apocalyptic Baltimore, the video for For Sure actually left me a bit cold, but as mentioned above, I’m loving the music.

Apparently, BTV, they were playing several new songs, so this looks good for a new album some time soon – it’s been three years.

Yep. Spotify served up a bit of a potential argument amongst bands yesterday as Tame Impala’s Yes I’m Changing was immediately followed by Future Islands’ Seasons (Waiting On You).

See, Tame Impala are very much of the impression that people do change, even going so far as to vehemently refute any other possible scenario:

They say people never change, but that’s bullshit, they do

Pretty comprehensively coming down on one side of the fence there. And why wouldn’t they, given the title of the song?

Future Islands are less convinced though, taking a more pragmatic approach. Sure, people changing is a thing, but do all people really change? Well, no. Not according to them:

People change, even though some people never do

And even then, if people do change, is there any net difference once that process has taken place? Sam Herring says not:

This is basically the First Law of Thermodynamics applied to personality. And that tells us pretty much that nothing ever changes, which certainly sticks a metaphorical finger up at Tame Impala, doesn’t it?

If it came down to straight fist fight though, Tame Impala would surely win.

So what do we learn from this? Maybe that there are clearly diverse opinions on the ability of individuals to change, or maybe that I should just accept that there’s probably very little value in analysing song lyrics quite so deeply, even when there are consecutive, apparently contradictory opinions expressed therein.

My Spotify playlist featuring both these songs, plus a vast array of others full of words postulating upon life, love and most other stuff (including, in one case, Pink Robots), is available here.