If you add a “Plus” to something, you suggest augmentation or improvement.

But I digress. The subject of this post was never meant to be the recent history of Afrikaner politics.

It was to be about this stuff: 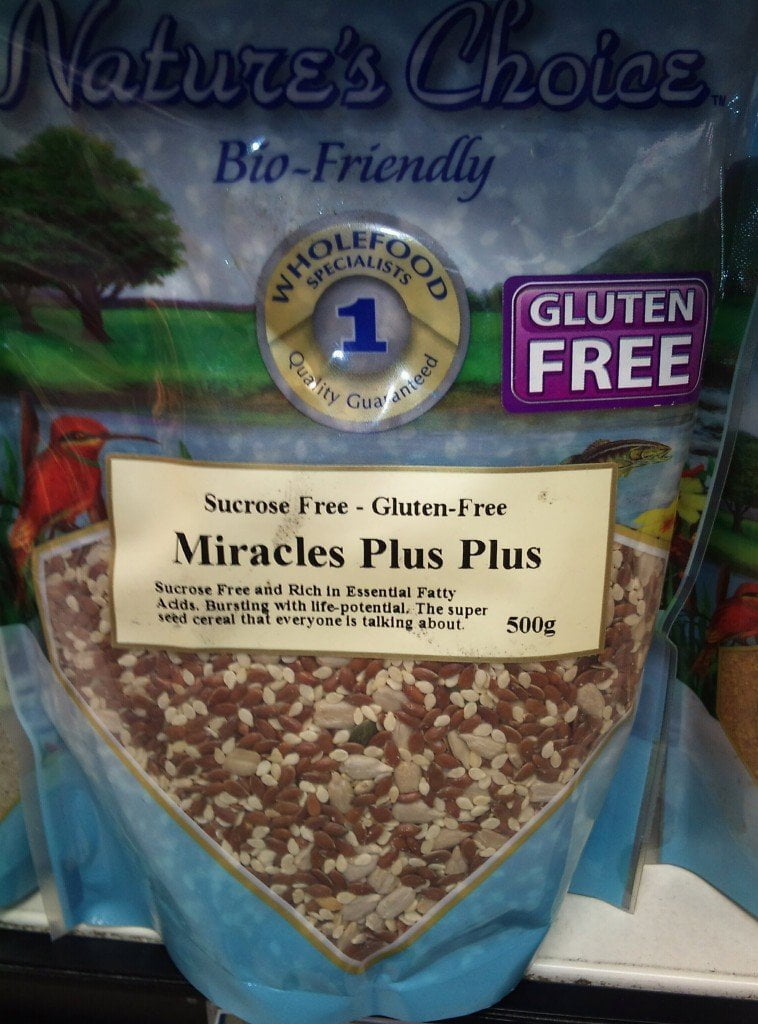 Based on the discussion above, just imagine how many positive changes this sucrose-free, gluten-free super seed cereal must have gone through to attain the dizzying nomenclatural heights of “Miracles Plus Plus”.

But look at the starting point for those improvements. Before we even started with the product refining process, we were dealing with Miracles. I’m talking walking on water here, curing the sick, feeding the 5000 (albeit with just 0.1g of seed cereal each). I’m talking restoring a severed ear while catching a fish with a coin in its mouth. Proper Derren Brown stuff.
Miracles, people. Miracles.

And then they made it better (possibly by removing the sucrose, possibly not. I actually have no idea, but it was obviously improved in some way) and it became Miracles Plus.

At this point, many cereal manufacturers would have rested on their laurels.
“We’ve just improved on Miracles,” they would be saying.
“What more do you want? The moon on a stick?”

Not Nature’s Choice.  Oh no. They had to push the seed cereal envelope, test the limits of bio-friendliness and essential fatty-acid wealth. They only went and improved it again. Boom. Maybe this time they took the gluten away. Or maybe it was the sucrose that they hadn’t actually removed the first time. Either way, what had simply been Miracles Plus now had to be renamed to reflect its superiority over that product. And what better way to go than down the Pieter Mulder School of Renaming Things That Have Been Made Better, again?

Thus, Miracles Plus Plus was born.

I’m aware that you may be struggling with what you have just witnessed here.
I know. I rushed it and serial cereal evolution is not a subject that can or should be hurried.
I apologise. Let me take you through it one more time.

When you look back at the extraordinary history of this product, from not so humble beginnings through repeated processes of amelioration and augmentation to where it is now, is it really any wonder that it is the super seed cereal that everyone is talking about?