After a dramatic last day in the Championship, the only game that really mattered – wednesday v Palace at Swillsboro’  – finished 2-2.
And that, as the BBC Football website videprinter confirms, means that Sheffield wednesday find themselves relegated to League One:

As a lifelong Sheffield United fan, I am celebrating (again) this evening. I was going to go the whole hog with the fizzy wine, but I think an understated Castle Milk Stout will do the trick.

And then some fizzy wine. 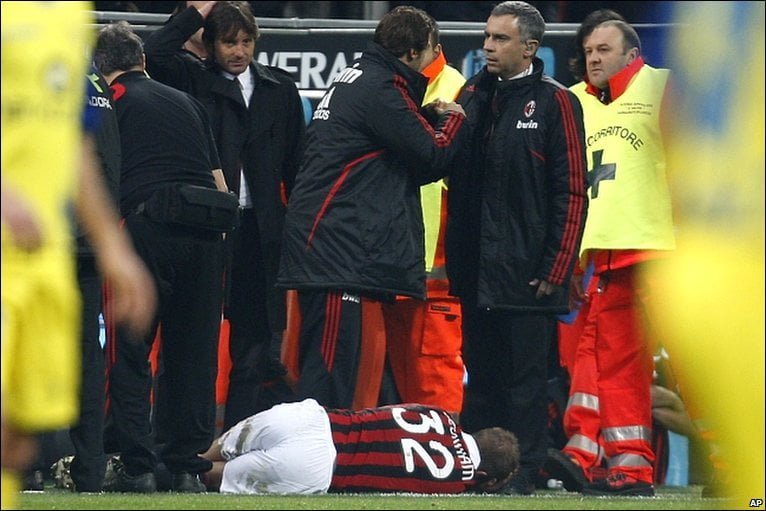 David Beckham’s dream of playing in a fourth World Cup looks over after he tore an Achilles tendon in AC Milan’s 1-0 win over Chievo on Sunday. Beckham was unchallenged when he suffered the injury and hobbled off in pain before being stretchered away.
The 34-year-old was hoping to be part of England’s World Cup squad in June, but instead will fly to Finland on Monday for specialist surgery. “A rupture of the Achilles tendon is suspected,” said an AC Milan statement.
Consultant sports physician Dr Tom Crisp told BBC Radio 5 live: “It’s remotely possible he may be running in three months.
The chances of him being fit to play for England are non-existent.”

I’m as sick as a parrot. This is a massive blow for England. There’s still no-one, worldwide, who can cross a ball like Beckham. England are really going to miss that talent. Because I foresee internet connectivity issues over the weekend and a busy day today (errands, rugby, shopping, drinks later), it’s a case of writing this post in advance (Saturday morning) while I still can. I’ll then set it to publish tomorrow lunchtime and no-one will be any the wiser. God bless WordPress.

As I’ve said before, there’s always the danger of a major or catastrophic event occurring in the meantime, in which case small talk may look a little benile, but I’ll take my chances. And, to make it even more realistic, I’ll even chuck in some quotes about yesterday’s sporting events, even though it’s like having the reverse of Biff’s Sports Almanac in Back to the Future III:

How about that Australia v South Africa match. What a game? It was SO close: especially at kick off time – the teams were completely evenly matched (at that point). And some of the kicking and passing  throughout the game also impressed me, although not all of it, of course.
And Manchester United v Arsenal.  Well, who could have predicted that scoreline? Two big clubs, of course, but I think that gives us all an idea of the eventual outcome this season. Possibly.

There. All but the most stoic of readers will have been fooled. And I’ll see you again on Monday. Enjoy your day.