The new FNB “Help Will Light The Way” TV ad is pretty special. It’s beautifully filmed, evocative, heartwarming, and has an Ludovico Einaudi soundtrack. How on earth can this have come from the same people who gave us the terrible “Steve from Beep Bank” crap?

And then if you choose to continue with the YouTube video after the ad, there are a number of positive stories from around the area where the ad was shot, all along the theme of South Africans helping each other.

Look, it’s not going to change the world, nor is it going to make everything suddenly alright, but it does give one a bit of hope that there are people out there who are trying – and succeeding – in making a difference.

To do that, you’ll need to go to their website and click the appropriate link. But please remember that when paying, certain rules should be observed for the collective good:

EFF encourages fighters to use the FNB ATM to depositing membership fee as opposed to doing it inside the bank.

Economic Freedom Fighters encourages all those who are paying their membership directly to do so at the FNB ATM, as opposed to inside the bank. This is because when you deposit your membership fee inside the bank the greedy financial capitalists take R8 of the R10 membership fee. However, depositing it at the ATM is much more reduced.

Fighters across the country must guard at all times against being taken advantage of by any system. The membership fee must, as much as possible, contribute to the sustenance of the organisation we all love.

Damn those greedy financial capitalists and their 80% fee structure. Believe me, they’ll be the first up against the wall.

How long since you last saw one of these? 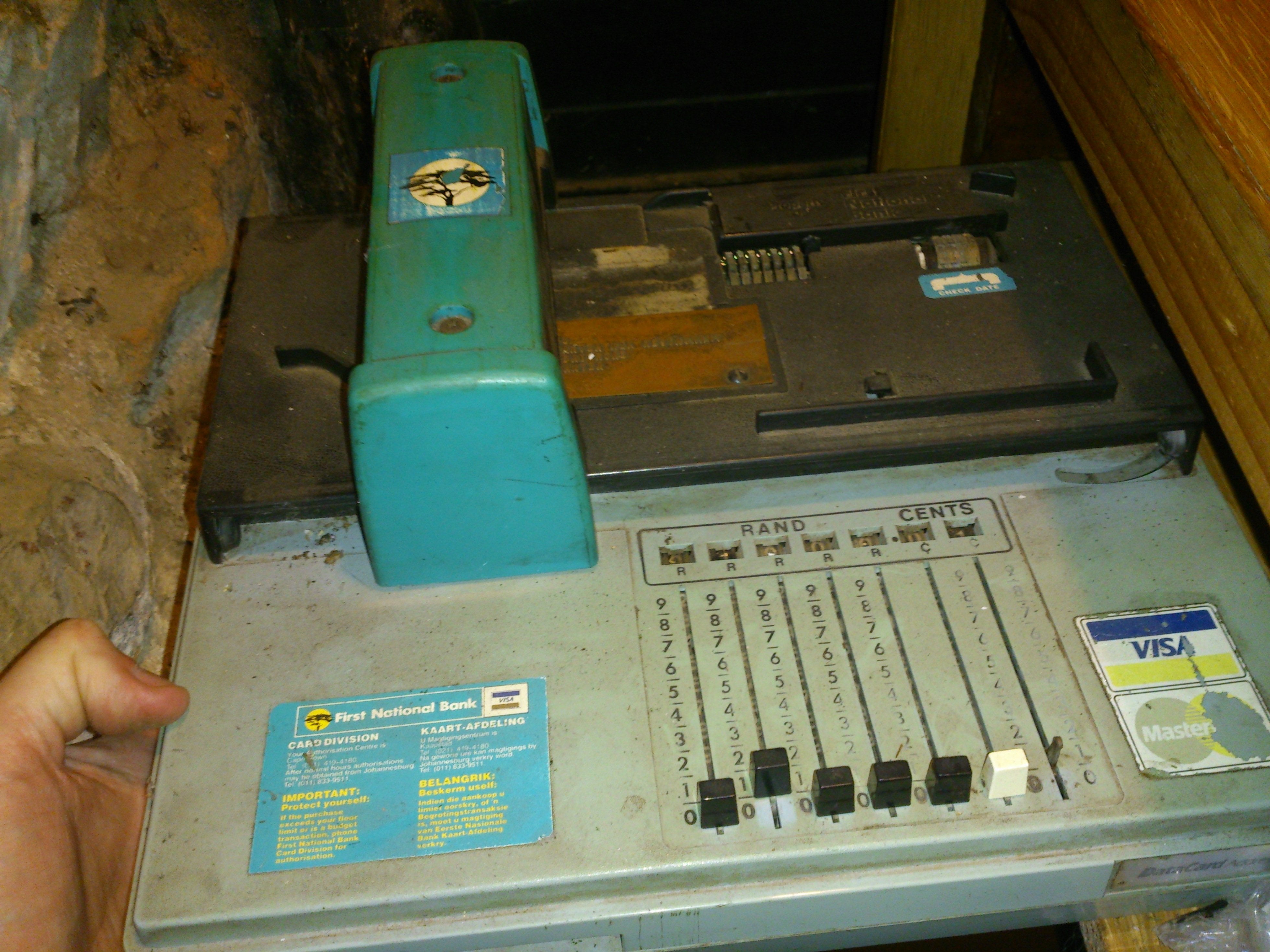 This was tucked away behind the counter at the equally aging Constantia Nek Restaurant where we stopped in for a quick beer and ice cream after acrobranching.
Covered in dust and grease (again a similarity with the rest of the place), it felt clunky, awkward and HEAVY!

It was the first one I’d ever seen in South Africa. But then it’s only been 9½ years since I arrived…

Don’t expect too much this evening.

I’m utterly knackered. Emotionally, mentally and physically this week has been draining. Somnially, it’s been a complete disaster. And I’ve inhaled enough Icelandic volcanic ash to close a nation’s airspace.

Actually, that last bit wasn’t true. But the rest was gospel. And while today I have been completely out of it, having spent the day at home looking after two demanding, but hugely lovable little kids, when I have ventured towards any sort of information source, all I have heard about is flight chaos in the UK and over the counter World Cup ticket chaos in South Africa.

It’s difficult to blame anyone for the Icelandic volcanic ash issue. Even the neanderthals that were interviewed by Sky at Manchester Airport were understanding, using a softer “Ug!” rather than the more aggressive it’s-Willie-Walsh’s-fault “Ug!!” (note the extra exclamation mark) that they were voicing last week.

The World Cup ticket debarcle is also difficult to pin on anyone. Or, rather on any one. It seems to me that at every stage of the process, each person or organisation involved failed in their duties in some way.
FIFA, whose computer system was overwhelmed – again. First National Bank with their irritating “How can we help you?” tagline, to which several thousand people can now respond: “By getting enough application forms to your bloody branches, you tossers!”; and lastly, though I hate to say it, the individuals buying the tickets themselves.

EyeWitness News was reporting that punters were angry that the cheapest (Category 4) tickets had sold out so quickly. Well, here’s some news for you – I have 24 of them and I have had for well over a year now. It wasn’t so tough – all I did was actually get my arse into gear a whole 15 months before you. No overnight queues, no fighting with the person behind me who thinks I should be behind him, no last-minute computer glitches, no issues with Cape Town games being completely sold out (shock). Not hard.

So, while I think the Local Organising Committee, FIFA & FNB have let people down – badly – it could all have been avoided if those people weren’t jumping on the bandwagon so very late on.

But I bet you haven’t learnt a thing…