I’m heading down to Long Street for the FIFA Fan Fest street party ahead of tonight’s FIFA 2010 World Cup Draw.

Cape Town has gone more than a bit mental. It’s going to be wild and it’s going to be busy.
It may help you to know that I’ll be the good-looking oke in the Bafana shirt. Do come and say hi.

UPDATE: I get to see: 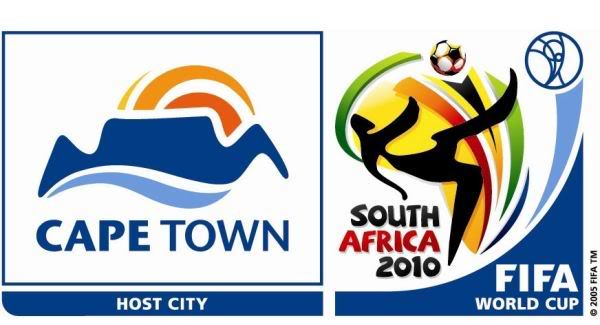 Some wonderful examples of stating the bleeding obvious as journalists desperately try to make a story out of pure speculation over the FIFA World Cup Draw in Cape Town this evening:

A favourable draw for Bafana will give the hosts a chance of making it past the early stages of the first World Cup on African soil.

Wow. Who knew? Presumably a less favourable draw would reduce that chance?
(This is just a guess).

Three possibilities loom for Bafana Bafana when the 2010 World Cup draw is made: an easy passage to the second round, a challenging yet still possible promotion to the last 16 – or the dreaded Group of Death.

In between these three possibilities lie other inter-possibilities. Like, for example, Bafana Bafana getting drawn in the Group of Traumatic Amputation, which isn’t quite as bad as the Group of Death, but which they will want to avoid more than the Group of Permanent Injury or the less difficult, but nevertheless potentially challenging Group of Unfortunate Infection.

“I just hope that we won’t end up in the toughest group,” said French federation president Jean-Pierre Escalettes.

Never mind, even if you do Jean-Pierre, I’m sure you’ll handle it (in true French tradition).

US coach Bob Bradley said his team was hoping for a group in which they would have a “good opportunity to move forward.”

This is the sort of coach I like. Not one of those coaches that comes out with lines like “I really want us to fall at the first hurdle” or “I hope we lose all our games”. That’s positive thinking right there, Mr Bradley and it’s to your credit. Nice work.

Tomorrow on 6000 miles…, we continue our exploration into the possible religious views of the Pope and the defaecation habits of ursines.

LA Galaxy, AC Milan and England midfielder David Beckham is here in Cape Town for the World Cup Draw tomorrow evening and took time out of his busy schedule with FIFA to give an interview to… FIFA. Unsurprisingly, (for all the reasons you are thinking of, be they contractual or otherwise) he seems happy to be here:

When I was last here with England, I had the honour of meeting Nelson Mandela. That was the highlight of my career; to meet such a great man and a strong man and such a passionate man about sport and life will always stay with me. Then I played in the game and broke my arm! South Africa is such a great country and a sporting nation that deserves this World Cup. I think it will be a very memorable and special one.

And on Cape Town’s preparations for 2010:

When you visit the country that a tournament is being held in before the event, you get a special feeling. As the time approaches, you notice that feeling intensify. As soon as I landed here in Cape Town, I noticed changes in the roads, as well as new hotels and it seemed as though the people’s excitement was tangible. There’s no better feeling than that.

And he’s right. I’m beginning to notice that projects are nearing their end. The N2 is almost quite wide again. The N1 is really wide. I was at the airport last night and was astounded at the progress that has been made. The Stadium handover is only a few days away. My study is built and has a great view from the window.
As for the vibe – I mentioned it here – you just know that there is something very special going on right now. And if this is what it’s like for some balls being taken out of goldfish bowls, then I can only begin to imagine what next June is going to be like. Aside from greyer and damper, obviously. But it will be party time in the rain, believe me.

There are those who were fine with the road closures for their private party, but who are bitching about other people having fun; complaining about the security and the hugely busy CBD, moaning about the helicopters flying over the City Bowl; but they just don’t get it. This is big. Bigger than a little awards ceremony, bigger than your beloved rugby, bigger even than the end of Apartheid, according to some people in the know. Sure, you’ve never seen anything like it and you don’t want to be part of it, but doing your best to justify that decision while those around you are being swayed by the feeling is really not pretty.

The seedings for the 2010 World Cup Draw are announced today. They are based on the FIFA world ranking of the teams in question, together with the performance of the nations in the last three World Cup Tournaments. However, the actual formula used is a top secret blend of 13 herbs and spices which means that FIFA can tweak it quietly behind the scenes to allow their favoured countries a smoother ride through the competition, just like they did with the European play-offs.
With South Africa almost certainly guaranteed a seeded position, there are seven other places up for grabs in the first pool. Timeslive.co.za has them down as follows:

France won the 1998 World Cup, but crashed out with scoring a goal 4 years later, recovering to be beaten finalists last time around. This could mean that they sneak into the first pool, despite only sneaking into the competition via Thierry “Cheating Bastard” Henry’s much-documented handball in their playoff against Ireland.
This would not be a good thing for England’s World Cup hopes unless (possibly) they were drawn against South Africa. The remainder of the pools might look like this:

Except the Irish, obviously.

Pots for Friday’s draw: eight groups of four countries to be drawn, each group containing one country from each pot.

I don’t want to come over all gushy and emotional here, but I have just been into town (more specifically the Waterfront and Green Point) and there is an unbelievable vibe in the Mother City right now. I feel so lucky to be here and be a part of it.

The combination of the start of summer, World AIDS Day and the FIFA World Cup draw has really got people into the party spirit and the Waterfront is absolutely pumping. It seems like everyone has a smile on their face and is happy to be here and that makes for a wonderful atmosphere.

There were dancing girls (and boys), Sugarsmax and Slikour from Skwatta Kamp, a giant Coca-Cola makaraba, a plethora of Zakumis, life-size foosball, huge footballs from World Cups since 1970 and a Sony-sponsored 5-a-side tournament. Even by Waterfront standards, that’s a lot going on.
I could hardly keep up and I had to go and hide in a local lab until the excess of adrenaline had left my body. Fortunately, it didn’t take long before the shaking subsided and the people stopped staring. I was rushing around, but still managed a few shots here and there. You can find them all here. I have a feeling that this vibe is going to continue throughout the week – and hopefully onwards towards the World Cup. I’ll definitely be out and about snapping as and when I can, so don’t forget to come back and check regularly.