The power came back on just in time for the beers to get cold again ahead of this afternoon’s FA Cup football. Which I can now also watch.

Talking of which, did you see this first win of the season? Lovely.

Yeah, I mean, I was being sarcastic about the hell on earth thing, obviously.

I’m watching Manchester City v Liverpool at the moment. Two pathetically soft penalties so far, and it’s only half time. Neither of them should have been given (as with the one in the Leicester v Wolves game earlier), and it’s all becoming a bit silly now. I slipped on the wet garage floor earlier, and I was immediately given two penalties by overly concerned referees.

Ridiculous. We don’t need this nonsense.

I didn’t see the FA Cup game between Torquay United and Crawley Town earlier, because for some reason, they didn’t show it here. But I wish I had.

2-0 to the home team at half time, and they’re cruising into the second round like a footballing knife through round one butter. And with 8 minutes left, they’re still two up and the man with the etching tool might well have been putting their name on the trophy already, for once Torquay sweep Crawley aside, they’ll surely go all the way and hold that famous trophy aloft… but wait…

Crawley get one back.

And then, in the 90th minute (which admittedly did last 19 minutes), they only go and equalise.

The crowd, who weren’t even there, go wild. But not for long, because 18 minutes into that 19 minutes added because of attempted (and failed) repairs to the Crawley goalkeeper, Torquay United score again to seal the tie 3-2. But wait…

Crawley get another one back, 21 minutes into the 19 minutes of stoppage time.

It’s 3-3. And the referee, deciding that 22 minutes of the added 19 minutes on 90 minutes signals that we’ll have 30 minutes of extra time. Incredible.

And that’s how it finished. If you are only counting the Torquay goals, that is.

A minute later, Crawley hit back. It’s 5-4 and there’s all the time in the world left (especially given the plethora of last minute goals in normal time). Mr Engraver shrugs a little, but then gets back to work with his Dremel multitool.

It only remains for someone to end this madness before it goes to penalties and finishes with an obviously fake, scarcely believable scoreline like 5-6 or something.

Step forward Ashley Nadesan, who, with 90 seconds remaining, pops the ball into the net for the Sussex giantkillers. And it’s a obviously fake, scarcely believable 5-6.

I didn’t see the FA Cup game between Torquay United and Crawley Town earlier, because for some reason, they didn’t show it here. But I wish I had.

Wow. What an intense 90 minutes of football yesterday. How good was that match compared with the dull sterility of Saturday’s semi-final? It must have been brilliant for the neutrals. Sadly, I’m not a neutral in this particular case and it was a sad end to our amazing FA Cup run, but what a way to go out. As the Nike adverts surrounding the field repeatedly proclaimed:

If you go down in flames, at least you were on fire.

And yes, we were. Aside from fifteen crazy minutes just after half time, including that one Ricky Villaesque run from Tom Huddlestone [“Tackle him! TACKLE HIM!!!”], we matched Premiership Hull City blow for blow and the team made us all very proud. Gone was the Wembley “stage fright” from previous visits, as we went all out for it from the first minute. From the Yorkshire Post:

Yesterday, dreams of becoming the first team from the third tier of English football to reach the FA Cup final died amid Hull’s superior football. But in a first half where United assumed control and then a late rally that briefly brought hope of forcing extra time, Clough’s men did their superb travelling army of fans justice.
No wonder that the hordes from Sheffield afforded their players a standing ovation at the final whistle. It was thoroughly deserved, and not just for yesterday’s efforts with the manner in which Clough has transformed the Blades being nothing short of remarkable.

The future is looking bright.

I went through every kind of emotion over the 90 minutes and together with the heat (and possibly a couple of rather strong homebrewed wheat beers), it left me completely exhausted. I’m not quite sure what state the Blades players were in, but if the Sheffield Star is to be believed, they had some… er… “male issues” at the final whistle.

Hmm. “Prostate on the turf”? Some problems with their R’s there.

Thankfully, all I had to do was wander upstairs to my (stupidly hot) bedroom. Many of the United fans had a long trip back up from London, arriving back in Sheffield well after midnight.

All in all, an amazing effort and a magical cup run, which started away against Colchester United early last November.

We’ll just have to win it next year instead…

Big day today, as my beloved Red and White Wizards head down to Wembley Stadium for the FA Cup semi-final against Hull City. My Dad and brother will be there and I’ll try (as before) to guide them safely in. I’ve seen United in 3 FA Cup semi-finals, all of them with us in a far better situation than our current League One position. In fact, if we win today, we’ll the first club in over a century to get to the final while playing in the “third tier”.
However, our record in those semi finals is “less than great”, sitting at 0-3.

Not for want of trying though. Who could forget this amazing moment from our 0-1 defeat to Arsenal at Old Trafford in 2003?

That’s how close we were. I was sitting (obviously, I wasn’t actually “sitting” at this point, but the point still stands (pun intended)) looking right along the goalline and I still cannot explain how Seaman kept that out.

But that was then and this is now. Sadly, our recent record in Wembley games is equally poor. The omens, they are not good, but I do like this sentiment from our manager: 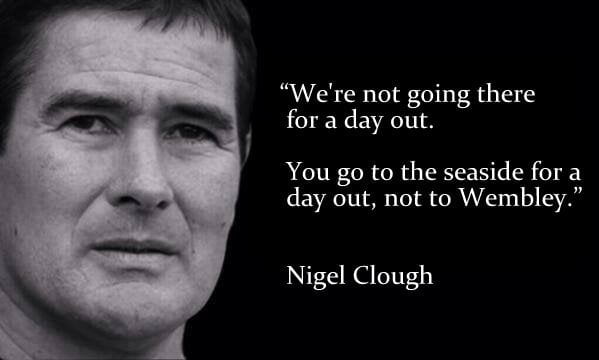 Because given our circumstances and the teams we have had to play (and beat) to get to this point, we should already be proud of what we’ve achieved, but what’s the point of resting on our laurels now? It’s been the way for a while in this cup run that any step further would be something amazing. So why not go for one more?

Retail Sales Manager Lisa Crossland said:
“As quick as new merchandise is coming in, it is selling. This morning alone (Tuesday) we have sold more than 800 T-shirts, 600 flags, 300 car flags, 250 foam Wembley hands.”

I’ve long since given up on trying to predict the outcomes of Sheffield United games, save to predict them as being generally unpredictable. In getting this far, the team has already proven that we have the ability, we have the belief. Now we just have to go out and put it all into practice this afternoon.

Not a dry nerve left in the house as my beloved Blades win through to the FA Cup semi final: 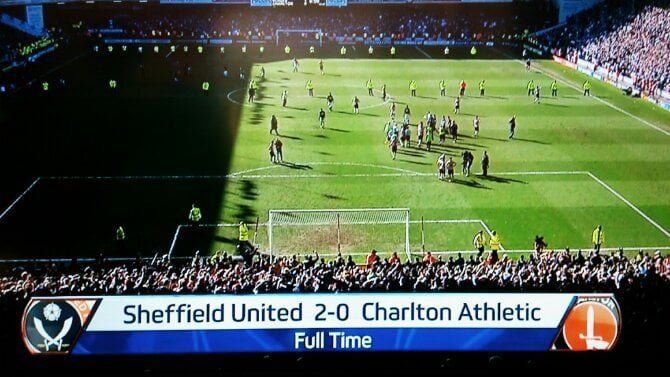 Bring on whichever team is (un)lucky enough to draw us for the big game at Wembley next month.