The country’s gone to shit, there’s literally not enough power to keep the lights lit, but we’re still hanging on by a thread…

Here are the loadshedding schedules for CAPE TOWN including stages 6, 7 and 8…ahead of the great darkness that lies beyond.

Good luck and stay safe out there, people.

Never – NEVER – believe anything any politician or government official says. 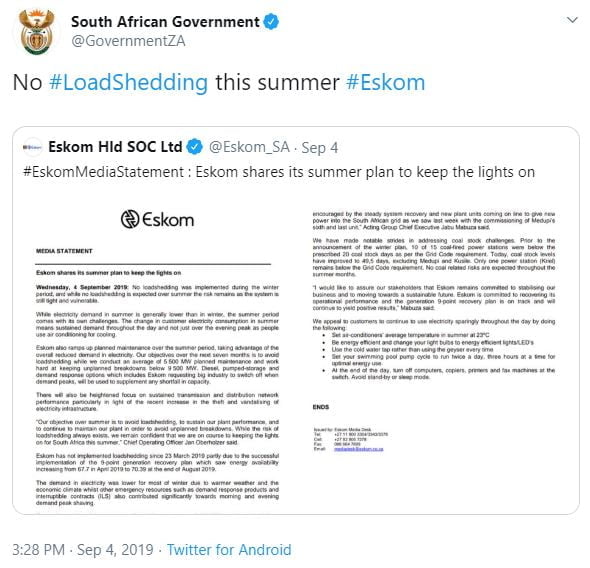 They all make promises they can’t keep, paid for with money they don’t have. It’s the same the world over.

And we end up sitting with no electricity for 7½ hours a day, despite what they assured us just 3 months ago.

There’s no doubting that SA is in a bad place at the moment regarding its power supply. Years of corruption, mismanagement and poor maintenance have left us in a deep hole. What I didn’t know was quite how deep.
Fortunately(?), expert Chris Yelland has now filled us all in.
(The hole, however, remains very much unfilled.)

1. SA is out of diesel
2. Pumped storage dams low
3. No power from Mozambique (2 lines down)
4. 5000 MW (8 generator units) down due to boiler tube leaks
5. Three units running but with boiler tube leaks
6. Other unplanned outages

Both HVDC lines (1420 km, total capacity 1400 MW) from the Cahora Bassa hydro plant between Tsongo substation in Mozambique & Apollo substation in Gauteng are down due to the tropical cyclone. Damaged lines inaccessible, Extent of damage unknown. Time to restore lines unknown.

Oh dear. About as bad as it could get then.

Chris has also come up with a 6 point plan to try to help us climb out of the hole: click here for curated thread, which no-one with any authority will pay any attention to. This attitude is at least some of the reason we’re in this mess already.

After the near countless allegations of nepotism, corruption, fraud and general mismanagement at Eskom, resulting in widespread loadshedding across the country, you’d think that things really couldn’t get any worse.
But you’d be wrong, because it turns out that even when they do manage to supply us with electricity, that electricity is often of very poor quality.

It seems that the coal and the diesel that our national power utility has been using is substandard, and thus the electricity it produces is not up to much either. Customers have reported devices running slowly, fridges not cooling properly and – in some extreme cases – power cords becoming clogged with “dirty electrons”.

While the principle of generating electricity by burning fossil fuels is fairly straightforward, the actual logistics and processes carried out in the power stations are more complicated and require a decent understanding of chemistry and physics. It’s probably a little beyond the average guy on the street, but basically as far as I understand it, the electricity we use is a flow of sub-atomic particles called electrons. Usually, an electron would carry a charge of -1, but because of the poor quality fuels being burned to produce our power, many of the electrons being produced in Mpumalanga and surrounds only have a charge of -0.8, and in one particular case recently in Ceres in the Western Cape, as low as -0.6, which caused TVs in the town to run in slow motion.

Not only do these crappy electrons not provide the correct amount of charge, their lack of correct strength means that they become “sticky”. Usually, an electron with a charge of -1 would innately repel any other electrons in its vicinity, but these “dirty”, less powerful electrons repel each other less, and that raises the danger of them sticking together in a lump within the wires and cables of the electricity system. Think of it like a blood clot in a coronary artery – and we all know the consequences of that. (It’s a heart attack, just in case you didn’t know the consequences of that.)
The sad fact is that the coal and diesel stockpiled for emergency use during these (often quite literally) dark times is all likely to be from the same batches, and so even though we might be getting electricity some of the time, it’s probably not going to be up to much.

There’s not much you can do to escape this poor quality electricity, save from giving your cables a good shake every couple of days to hopefully dislodge any build-up of sticky electrons before they get too clogged up. So just another thing to remember. Oh, and be mindful that smaller wires, like those in cellphone chargers, are particularly at risk.

There’s no quick fix here, folks. Much like Eskom in general. Much like the ANC. Sadly, we’re all going to have to get used to turning our fridges up and running Youtube videos at 1.25x speed until this passes.

Have you experienced problems with “dirty” electricity recently? Or do you have ideas to combat the damage it may do? Please comment below.

Some few facts for you to help make up your mind on whether I’m being cynical here:

Fact 1:
Eskom, our national power utility, a state-owned enterprise, has been run into the ground by mismanagement and corruption under the ANC government. Mainly (entirely?) because of these reasons, it cannot produce enough power to supply the country and so we – fairly regularly – have rolling blackouts. This is called loadshedding. I have written about it a lot.
The first significant loadshedding of 2019 began yesterday and looks like it will continue all week.

Fact 2:
We’ve got an election coming up in the next couple of months (exact date  May 8th, see below). We stay in DA-controlled Cape Town, in the DA-controlled Western Cape. All the other 8 provinces are governed by the ruling ANC.
There is (obviously) a lot of talk about the election at the moment. It’s safe to say that it’s probably among the Top 5 things that people in SA are aware of right now. Front of mind then.

Fact 3:
The (DA-controlled, remember) City of Cape Town has a hydroelectric facility which it can use in times of electricity shortage to mitigate the effects of loadshedding. And it does use this facility, nearly every time there’s loadshedding.

But – how odd – it isn’t using it this time around.

So, the cynic in me is suggesting that the DA is using this opportunity to remind the people of Cape Town just what ANC rule has done for the country.
And yes, I’ll be sitting in darkness from 8pm this evening thinking about exactly that. But just a bit of me will be wondering if it could have been different if the DA had not wanted to make a point.

Which is exactly what they would say, of course.

Which is exactly what he would say, of course.

Thank you to my correspondents and their corrections.