Ah yes. Another annual opportunity for slacktivism approaches. If you’re all done with clicking LIKE to cure some Indian child with a facial abscess and you’ve signed that online petition against whales (or Wales), you too can switch your lights off for an hour and save the planet.

If switching off the lights for one hour per year really were beneficial, why would we not do it for the other 8,759?
Hypothetically, switching off the lights for an hour would cut CO2 emissions from power plants around the world. But, even if everyone in the entire world cut all residential lighting, and this translated entirely into CO2 reduction, it would be the equivalent of China pausing its CO2 emissions for less than four minutes.

Well worth it then? No.

As the United Kingdom’s National Grid operators have found, a small decline in electricity consumption does not translate into less energy being pumped into the grid, and therefore will not reduce emissions. Moreover, during Earth Hour, any significant drop in electricity demand will entail a reduction in CO2 emissions during the hour, but it will be offset by the surge from firing up coal or gas stations to restore electricity supplies afterward.

But if you do still decide to continue with switching the lights off, then don’t even think about lighting a candle:

[They] are still fossil fuels—and almost 100 times less efficient than incandescent light bulbs. Using one candle for each switched-off bulb cancels out even the theoretical CO2 reduction; using two candles means that you emit more CO2.

That won’t bother anyone taking part though, because they will feel that they are doing their bit, making a difference. And while a little bit of me wants to correct them on that fact, it’ll only upset them. And the only thing worse than a misinformed tree-hugger is a sad tree-hugger.

But, if you are one of those people who thinks that they can absolve themselves of all their environmental misdeeds simply by clicking a switch on Saturday, perhaps you should consider a better way of reducing your impact on the planet, because what you are planning is a complete waste of time – and electricity.

After we brought you the ski slopes, smoke rings and heat-guided laser wonder from Denmark, here’s some more green coolness in the form of Boston’s Treepods. 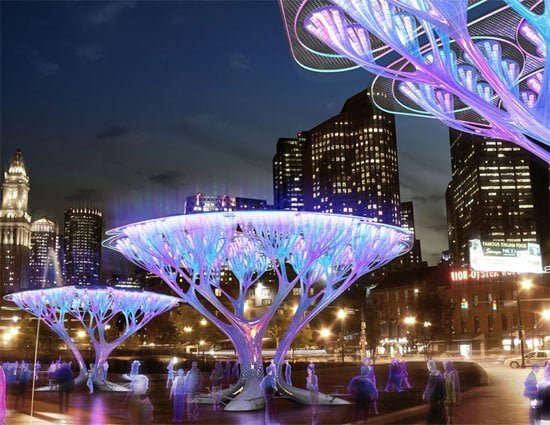 The Treepods would be constructed purely of recycled plastic bottles. On top, they’d be covered with solar panels to help power the CO2 filtration process, which would take place throughout the branches using a ‘humidity swing’ process. The trunk of the tree sports an integrated seesaw, where children can get off their lazy butts and start generating some electricity to help save the world already.

Side benefits of the Treepods include providing plenty of shade as well as habitats for confused birds. And at night, the Treepods would light up in a variety of bizarre colors, because if they weren’t covered in a bajillion LEDs, they just wouldn’t be worth having around.

These amazing artificial trees were only designed as a concept for an urban intervention competition and the idea probably won’t get any further than pictures on a website.
That’s pretty sad, because I think they’d make a welcome addition to any urban landscape.

Of course, being environmentally friendly is ever so trendy these day, isn’t it?
Tell a Greenie that you don’t recycle and they look at you in the same way that a normal person might if you were something they’d accidentally trodden in at the local park.
Mention that you like to eat meat and you might as well have said that you stab kittens with kebab skewers in your leisure time.
Which, of course, is nonsense: kittens are rubbish for kebabs – no meat at all.

Then there’s the whole oil thing.  The hypocrisy of your typical lentil-muncher lecturing you about BP and the Gulf of Mexico then popping off to meditation class in their dirty 2CV or VW Beetle, whale-song pouring out of the stereo, filthy diesel fumes pouring out of the back.

And don’t even get me started on the bloody dolphins.

Of course I do appreciate the sense in caring for our environment. Just not to the point where I have to ruin what short time I have on this earth so that some Patagonian sea snail can continue to exist. There’s a reason that humans are top of the food chain, alright?
I do recycle, I do watch my consumption of electricity and water, I don’t eat kitten kebabs, but I do these things because there’s a logic reason behind it (provides money for a local charity, keeps my bills down, not very filling), not because it’s trendy.

But now, trendiness and environmentalism have come together in the right sort of way with this waste-to-energy station due to built in Denmark.

Yes, this particular waste to energy plant has 1,500m of ski slopes going down it and it also blows smoke rings.
And no ordinary smoke rings, either:

At night the smoke rings will be lit up by heat-tracking lasers able to project a pie-chart onto the smoke that displays a quota of fossil-fuel CO2.
The designers explain: “The rather abstract pollution aspect will be somewhat more graspable and understandable, something you can see and relate to. The smoke rings are spectacular and highly aesthetical, but linked to a controversial theme at the same time.”

There’s a serious point here. These sort of ideas could help to define a whole new sort of cool when it comes to looking after the environment. Rather than solely being the haunt of unwashed hippies, it brings the cutting edge of modern design to the green agenda; it will appeal to a whole new group of individuals, which can only be good news for mother earth and those sea snails.

And it blows smoke rings.

I originally posted this here, but beneath a bit about the football that meant that many non-footballing people never actually got to read it.
The interest that it has generated, together with the ongoing news over the Taiji dolphin hunt has made me think that it deserves a post of its own. I am doing this here.

Comments on the original post can be found here.

Secondly: dolphins, The Cove and the internet.
Now, I like dolphins as much as the next man (as long as the next man isn’t Alan Cooper – I don’t like them that much). But I’m also one of those enquiring people who never takes things at face value and likes to look at both sides of a story. The annual dolphin killings at Taiji in Japan is one of those stories. It’s been in the news again recently, because the time for the annual kill has come around again and much reference has been made to the overly subjective film The Cove, which was released last year, documenting the 2009 kill and telling us that the water turned red with the blood of the dolphins.
Isn’t that dramatic? What do they think the floor of a slaughterhouse looks like?

Now, environmentalists want this annual practice banned – no matter that it’s been going on for over 300 years and there are still plenty of dolphins to be caught.  And that’s ok, because everyone is entitled to their views on this and when you are a greenie, you have to protest about something – it’s what you do. And dolphins are the most awesome thing to protest about because they’re dolphins. And dolphins and pandas are top of the list when it comes to poking the human conscience. Them and puppies.

But what about humans? Because Taiji isn’t some oil-rich, gold-laden glittering city. Taiji is a small town with no industry or income other than that of the fishing (and for fishing, you can read “whaling”). So when you take away what they are their ancestors have been doing for centuries because it doesn’t fit with your Western beliefs, what’s left for those people?
Imagine Jeffery’s Bay without the surfing, imagine Boulders Beach without the penguins: there’s suddenly no support for those people; poverty ensues and the settlement – there for hundreds of years – is ruined because of the views of some activists 1000’s of miles away who refuse to look beyond the “plight of the dolphins”.

And then the people who support them without considering the reasons why they are doing it. Why?
Dolphin, panda, puppy – must protect.
It’s a trendy, ill-thought through, kneejerk, bandwagon-jumping response.
What gives you the right to decide how others should live?

I don’t like the thought of dolphins being killed either, but it’s a necessary part of  life for the people of Taiji. The dolphin catch provides food (albeit potentially unhealthy food, but beggars can’t be choosers) and income for the town.
Imagine if your only sources of food and income were taken away from you because someone in America didn’t like the way you lived your life?
That’s no more braais, because they don’t agree with the way your lamb is slaughtered or the ingredients in your boerewors were sourced. They’re stopping your income as well, because they don’t like the way you make your money. Of course, they have no legal powers to do this – but actually, they’ll even go as far as breaking the laws of your own country to make your hard life even harder.

What happens to the people of Taiji if the dolphin catch doesn’t happen? Have you even considered that?
No, of course not:  because it’s about dolphins and pandas and puppies.