You may remember him from such posts as the one above and the infamous – and so recognisable – Bargaining Ratios.

It’s Thanksgiving time in America, and Dave is recalling the outrage that ensued when he posted this picture on his Facebook feed: 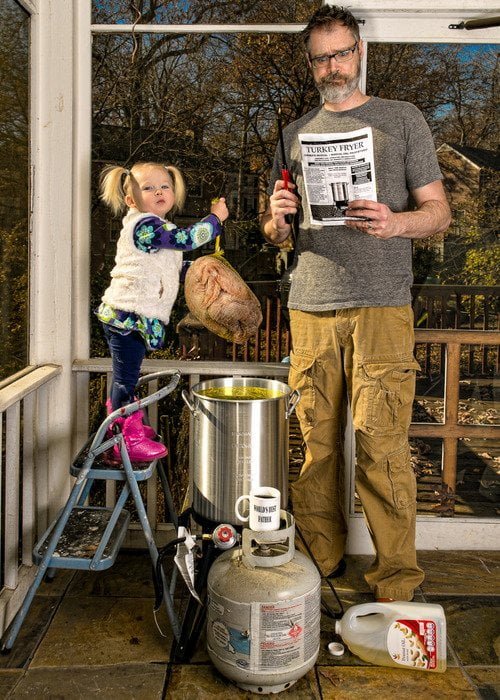 I think the negative reactions must have come from people who saw this image in their friends’ newsfeed and didn’t realize what they were looking at, but the expressions of shock and anger from complete strangers kept me amused all day after I posted it.
What killed me was that people thought this was a real picture, never even stopping to question the fact that they were looking at a 20 month old child holding a 14 pound turkey in one hand, let alone all of the other jokes hiding in plain sight in this image.  I think sometimes people get so caught up in wanting to believe in the stupidity of others, that they themselves end up looking, well..you know.

See, what I’ve done is to get caught up in this trap in the title of this post. So anxious to point out others’ misplaced outrage that I assumed that they had thought afterwards. This is obviously not what happens in slacktivist outrage.

Haha. I wonder how many parents recognise this scenario, nicely illustrated by Dave Engledow: 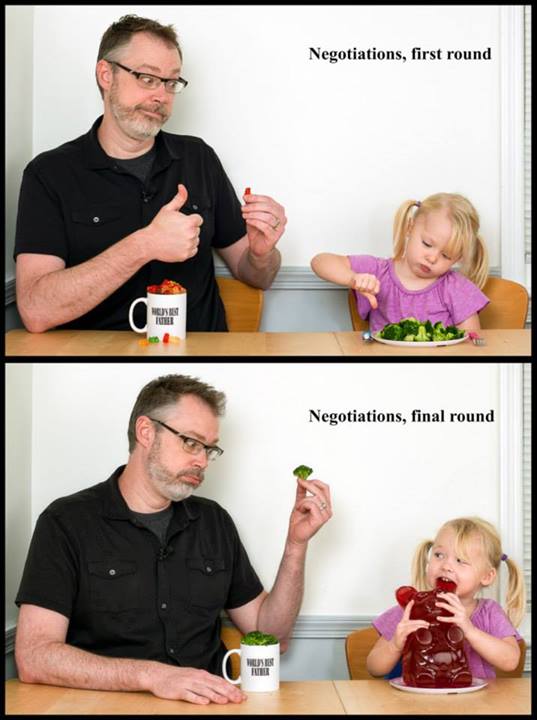 As Alice Bee learns to hone her bargaining skills, the ratio of nutrition to bribes has gotten completely out of balance.

Regular readers may recognise Dave and Alice Bee from the excellent World’s Best Father calendar post. Amazingly, it appears that she is still alive, despite her Dad’s best efforts. 🙂

P.S. Somewhat amazingly, my kids actually LIKE broccoli… Who knew that sort of thing happened?

I spotted this calendar idea on Kickstater and I think it’s fantastic.

Been there. Done all that. Should have taken photos.

The “World’s Best Father” is Dave Engledow and that cute little lass is Alice Bee, his daughter.

The hilarious photo collection featuring Engledow and his young daughter, Alice Bee, in a series of precarious situations might suggest the exact opposite.

But don’t worry, the Maryland-based photographer says. Alice Bee is always safe and much of the collection is photoshopped.

“When my daughter Alice Bee was born in 2010, I knew that I wanted to document her life creatively and put together a collection of photos that she would treasure as an adult,” Engledow writes.

Engledow has documented his daughter, now 1, in over 56 different situations — none of which are exactly appropriate for an infant.

In one image, she’s seen nibbling on a pack of sparklers. In another, she’s lifting a barbell like a true Olympic champ.

One object, however, always appears in each — a mug boasting the phrase “World’s Best Father.”

You can see Dave’s Facebook page here, his kickstarter page here and see some stuff on flickr here.