SA politics is rarely dull. Some people might say that this is a good thing, and represents a young, vibrant democracy, constantly evaluating and questioning itself. And yes, that would be a good thing, but it does seem to be mainly widespread corruption and intra-party mud slinging which is taking the centre stage, while actually serving the country (which really, really needs serving), falls by the wayside.

The most recent infighting is within the governing party, the ANC, who are happily fiddling while Rome has no decent housing, a disastrous education system, zero unemployment prospects, an upcoming third wave of Covid-19 (now closer than ever) and plenty of crumbling infrastructure.
Still, while we’re concentrating on their petty squabbles, we’re not talking about all that other stuff, are we?

And I don’t use the term “petty squabbles” lightly, because while the consequences of their collective actions might be very serious indeed, it’s hard not to crack a faint grin at their playground posturing.

The latest episode (coming a whole day after the previous episode) concerns ANC Secretary General Elias “Ace” Magashule. He’s likely bent as a 12 Rand note, having been charged with fraud, corruption and money-laundering. Taking decisive (cough) action, (some of) the rest of the ANC leadership gave him 30 days to step aside from his post for the duration of his trial. That 30 days has just expired and Ace is still there. And so the President suspended him.

And Ace then suspended the President. “Lol”.

Cyril is having none of it. And rightly so, it seems, because while Ace says that Cyril has no right to suspend him, Cyril does have (the majority of) the NEC on his side. Ace has… well… himself. And constitutionally (that’s the ANC Constitution, not the National one), he doesn’t even have himself, because he’s been suspended.
Ace has as much power to suspend the President as my beagle has.

Lots of enthusiasm, lots of noise, zero understanding of how the actual political system works.

And so the ANC fragmentation merry-go-round continues, with some heavyweights and branches coming out in support of Magashule, more of them defending Ramaphosa, and local political commentators wasting no time at all in invoking Godwin’s Law.

All of this chaos must be like manna from heaven for the opposition, right?

Well, sure, if they were able to utilise it to strengthen their position. Sadly (I say sadly because a decent, strong opposition is hugely important to any country, and not because of any personal political affiliation), they are so incompetent that they’re actually going down in the polls despite the complete and utter fuckshow happening up top.
And why? Because of crap leadership and… gosh… political infighting within the party.

It all comes down to the cult of personality over actual ability to do the job they are elected and mandated to do. In a recent small scale study, an orange TV host was elected President of a powerful North American country, despite having no demonstrable political ability at all. The world watched on.

It did not end well.

I’m not saying that we’re quite at that level of disaster yet, but until we get leaders who are more concerned with leading the country than their own parties and personal position and wealth, we’re going nowhere except backwards.

Some few facts for you to help make up your mind on whether I’m being cynical here:

Fact 1:
Eskom, our national power utility, a state-owned enterprise, has been run into the ground by mismanagement and corruption under the ANC government. Mainly (entirely?) because of these reasons, it cannot produce enough power to supply the country and so we – fairly regularly – have rolling blackouts. This is called loadshedding. I have written about it a lot.
The first significant loadshedding of 2019 began yesterday and looks like it will continue all week.

Fact 2:
We’ve got an election coming up in the next couple of months (exact date  May 8th, see below). We stay in DA-controlled Cape Town, in the DA-controlled Western Cape. All the other 8 provinces are governed by the ruling ANC.
There is (obviously) a lot of talk about the election at the moment. It’s safe to say that it’s probably among the Top 5 things that people in SA are aware of right now. Front of mind then.

Fact 3:
The (DA-controlled, remember) City of Cape Town has a hydroelectric facility which it can use in times of electricity shortage to mitigate the effects of loadshedding. And it does use this facility, nearly every time there’s loadshedding.

But – how odd – it isn’t using it this time around.

So, the cynic in me is suggesting that the DA is using this opportunity to remind the people of Cape Town just what ANC rule has done for the country.
And yes, I’ll be sitting in darkness from 8pm this evening thinking about exactly that. But just a bit of me will be wondering if it could have been different if the DA had not wanted to make a point.

Which is exactly what they would say, of course.

Which is exactly what he would say, of course.

Thank you to my correspondents and their corrections.

It’s a phat 5 years since I wrote about a possible degree of slippage in the City of Cape Town’s efficiency in responding to ratepayers’ issues and getting stuff done about them. Back then, I said:

…the city is becoming less Capetonian and more Joburgesque every day. The DA are slipping, but they know that they can afford to, because everyone can remember – and can still see – just how bad the alternative is.

Of course, these days Joburg is a DA city too, but that doesn’t mean that things here have really improved. Politically speaking, Cape Town remains so staunchly blue that there’s no real pressure for them council to repair potholes, power outages and the like promptly like there was when their governing future was in the balance.

Or maybe I’m just being cynical? But either way, the city’s response to local problems is simply not as good as it used to be.

There are ways around it though. So, in order to assist you in dealing with the system, here’s how I got the streetlights on our road fixed, in an easy 47-step process.

Still, at least they brush up their grass clippings.

Today is supposed to be a day of national protest in South Africa. Well, as I’m writing this (four days ago), it is. It’s also a normal day of work (except it obviously won’t be) and right now no-one seems to know what to expect, save maybe for the Presidency and chums ignoring whatever protests do occur.

The thing is, South Africa is such a diverse and divided nation that any coherent mass protest action is terribly difficult to organise. While individual political parties and organisations can raise their own demos, no-one has really managed to successfully mobilise across all racial, political and social classes. And that’s why JZ and friends have happily got away with it all so far. It’s also why things need to change if today’s action is to have any effect.

Look, there’s enough support for the protest, but it’s completely fragmented. Already, as I am writing this (four days ago, remember) people – supposedly on the ‘same side’ – are questioning the basis for people’s anger, arguing and fighting about the legitimacy of some protesters with superb logic like: “if you didn’t protest against (a) then you can’t protest against (b)”. Because obviously there are rules for being allowed to express your viewpoint on any given subject.

It’s a phat, public mess and Zuma must be loving every minute of it.

Obviously, people need to look past their individual grievances and try to find common ground if this is to have any chance of working. And I do recognise that that is much easier to say than to do.

I believe that there are many reasons for getting rid of this rotten, corrupt regime. Whatever yours is, today is a day – even more than any other – when you need to recognise and respect that others may have their own reasons too.

* All will become clear on this bit tomorrow. 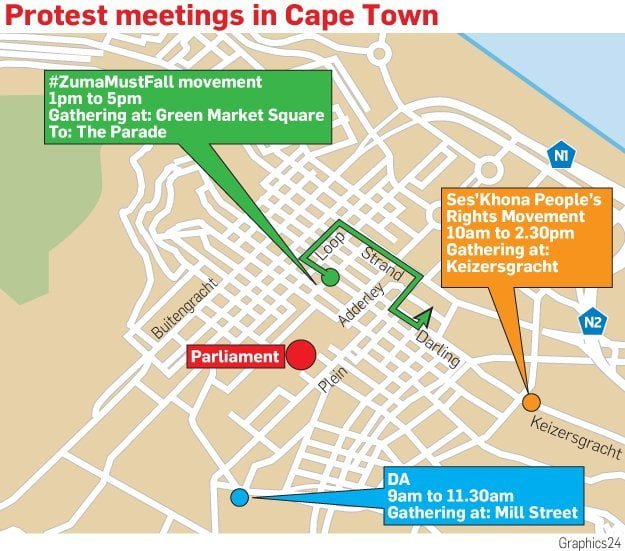