Actually not. In fact, by lunchtime, I’ll be where I need to be, geographically speaking. But there’s no link like a manufactured tenuous link, so here’s an insurance ad from SA involving aeroplanes for your perusal/enjoyment.

Very good. The jury is still out on this insurance company, as far as I’m concerned. I’m not sure quite how the South African Constitution allows for them to choose to insure one gender but not another (and then, what of those individuals identifying as transgender?).
The only reasons I haven’t delved deeper into this are:

a) There are many more, more important abuses of the Constitution going on, and we shouldn’t distract the experts from their work on those, and
b) It doesn’t really affect me very much. I’m just curious as to how it works and as to what happens when someone starts “1st for Whites”.

In the meantime, the ad people have free rein to stereotype blokes as much as they like, a free rein which they are using… freely.

I don’t think that we in South Africa are in any doubt that South Africa is going through a bit of a rough patch at the moment.  While I don’t believe everything I read in the papers, I’m not sure that you can blame this impression solely on our allegedly “anti government media”, because it does mainly seem to be down to our erstwhile government and top clown, Jacob Zuma. It’s not like the government is even bothering to properly deny stuff or explain themselves anymore: they just mumble something about some agenda and continue on to the next scandal. They really don’t appear to give toss about what the public think of them. I’ve covered the “crossing of these lines of pisstakery” in a couple of posts previously here and here.
But let’s not think that the problems end with the issues of the FIFA bribes, Nkandla, Eskom’s loadshedding and the winter rain (ok, we can’t blame them for that). Because wait, in true Verimark style, there’s more!

There is the much delayed Marikana report (about how and why the police shot dead more than 30 miners in 2012), to which the President is currently “applying his mind” [insert oft used line about how that shouldn’t take long], but of which we now know the approximate contents of, thanks to an off the cuff remark by JZ yesterday.

Even the Marikana miners were shot after killing people

So that’s the way that one is going.

And then there was the Al Bashir affair, whereby the Sudanese President escaped from/was helped to leave the country, defying a court order and the wishes of the ICC, which SA – and more specifically JZ – had signed up to.

Max du Preez spelled it out for us all on Facebook:

I think the matter is rather simple. When the ANC/government volunteered to host the AU summit and prepared for it, it knew very well that people like Mugabe would pressure it to invite Omar al-Bashir. It knew very well – and was reminded of it shortly before Bashir’s arrival by the ICC – that it had no legal ground to defy the ICC arrest warrants and South Africa’s own enabling act of parliament.
Government also knew that it would be a African diplomatic disaster to arrest Bashir and deliver him to the ICC in Europe. It must have known that there would be a very good chance that some NGO or rights group would take the matter to court. It must have known that the court was highly likely to order Bashir’s arrest. It went ahead anyway, so we can only conclude Zuma and his inner circle had made a conscious decision in advance that they would defy such a direct court order.
They went further than that: they misled the judges of the High Court – probably even blatantly lied to them – and then executed an escape plan for Bashir.
This is not about the credibility or legitimacy of the ICC. It’s about the president and the cabinet of the country defying a direct court order. Their response to criticism was to attack the court as “anti-ANC”, “anti-majoritarian” and “wanting to govern the country” – we had these arguments from Blade Nzimande and Gwede Mantashe the last two days.
Can we now expect the ANC and government to also defy a likely court order later this year that the criminal charges against Zuma be reinstated? The next step on this slippery slope is to defy the results of an election. And a slippery slope it is indeed. If our constitution tumbles, so do our freedom and stability.

There’s nothing there that seems too much of a stretch, and, as with any premeditated crime, that’s rather worrying.
The solution to this seems simple (at least, in a Belling the Cat kind of way): JZ must go. The trouble with this is that because of a distinct lack of previous action, and (let’s not overlook this) a significant amount of clever wheeling and dealing by the man himself in placing allies in influential places and taking very good care of them, there’s no-one that’s going to be able to do that.

Save maybe for the electorate. But firstly, would they, could they ever vote the ANC out of power? And secondly, as per the point raised by du Preez above, if they did, would the ANC accept the result?

Previously, I would have never believed that the first was possible. Now, given the levels of dismay and disquiet, I’m beginning to change my tune on that one. (Raising the next issue – do we have anything significantly better in the current opposition?)
Previously, I would never have believed that the second would ever happen. Now, given the lack of respect that the government is showing for the country and seemingly, for the rule of law, I’m not convinced on that either.

Yeah, as I said, happy days here in ‘the Rainbow Nation’. 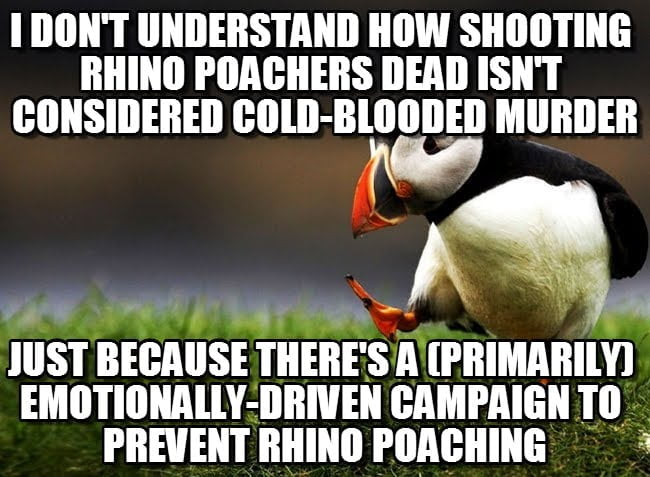 …and go and get a nice coffee.

Seriously though, when did it become ok to completely ignore the Constitution in this regard?
Yes, rhinos are endangered. Yes, poaching of rhinos is a terrible thing. You may even think that alleged poachers should face the death penalty for their part in the whole thing.

But, sadly for you, all of that is actually immaterial. Because that’s not what the Constitution says.

Or perhaps you think that the Constitutional rights of the poachers should be ignored in these cases?

But you’ll still want your Constitutional rights upheld at all costs, right?