I’m not sure exactly who you need to get in touch with if you want a new heart, because this ad doesn’t seem to have any contact details on it. 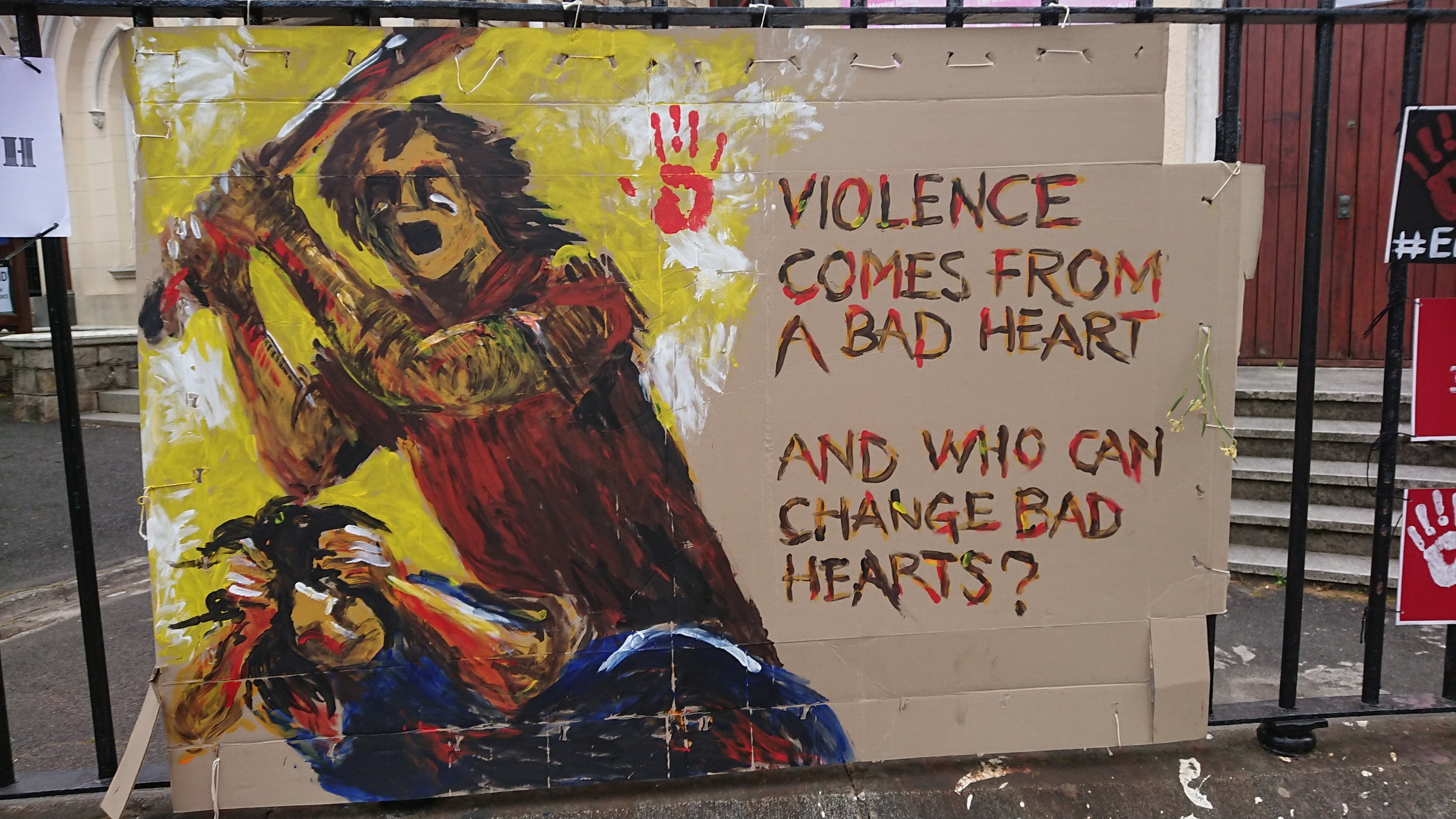 Let’s hope that the surgeon in question – whomever they may be – is significantly better at their primary employ than they are at appointing advertising agencies.

A 2-for-1 deal with a plastic surgery practice would also seem advantageous.

I saw this tweet and it reminded me about a post I’ve been meaning to write for a while now.

Because, the thing is that you can’t just run the pedestrian over, much as you’d probably like to. You’d get into trouble, sure, but worse than that, we’re still struggling with water restrictions here in Cape Town and people would frown if they saw you washing the bits of skull, brain and matted hair off your bonnet.

So you have to slow down. And then they’ve won.
And then they use that technique to cross the road every time.

But pedestrians aren’t the only ones to utilise this method to get where they need to be. Our local (and already notoriously shit) drivers are doing it too.

They’ve worked out that if they approach a stop sign on a side road at a appropriately foolish speed, and perhaps overshoot the white line by, say maybe just 50cm, then any vehicles on the main road they are joining will have to slow down, rather than risk an accident.

And, like the pedestrian above, once you’ve slowed down, they’ll take advantage of the situation to complete their nefarious manoeuvre.

Newlands Road in Claremont is nice and straight and has a plethora of sideroads where one can witness this action taking place at several junctions within a single 500m stretch. It’s also where I remind myself that I must blog about this each evening, before doing nothing about it.

I do recognise that – short of asking you nicely not to do it – there’s not much that I can do about halting this practice.
But at least I have now documented it.

Have you experienced this? Is it merely a Cape Town phenomenon?
Are you an overshooter? If so, why do you do it, you twat?

Submit your comments using the link below.

I was the good-looking guy in the silver car. You were the bloke who looked like a fat, sour-faced Michael Vaughan, driving a pale blue Honda Jazz and who had no clue about how traffic circles work.

I braked hard (which is the only reason that this is a missed connection), you didn’t, but I saw the conflicted look – steeped in both arrogance and guilt – that you shot me as you ploughed onto the mini-roundabout at the top end of Struben Road, blatantly ignoring my right of way.

And then there were those awkward moments all the way down Bowwood in the morning traffic, me following your nasty little car with the Bonnievale Route 62 and silver baby footprint stickers on the boot, and you constantly eyeing me in your rear view mirror, wondering whether you should apologise or get out and fight me. For the record, I don’t do road rage so I wasn’t swearing at you*, I was actually singing along to DJ Shadow’s Nobody Speak, so I was basically just swearing, full stop.

If you want to meet up for some driving lessons, get in touch and maybe together, we can arrange something which might potentially increase the safety of everyone on Cape Town’s roads.

* Probably just as well, given how that video progresses [achtung: much swearing].

When Helen Zille announced recently that she was not going to stand for the DA Leadership again this year, the reactions were many and varied. Colleagues used the opportunity to praise her good work for the party, opponents (generally quietly) celebrated and thinkpiece writers fell over themselves to write thinkpieces, having been starved of opportunities for hours since the statue debacle and not knowing that the lucrative magic porridge pot of xenophobic attacks were just around the corner.
Very few people turned to the medium of poetry. And that, dear readers, was a shame.

Surely someone must have gone down the versificational route to express their feelings on this momentous event. Yeah, there was plenty of interpretive dance, but I was after metrical composition, and I could find none. In fact, it was only on page 2 of the esteemed Southern Suburbs Tatler that I found appropriate balladry documenting Zille’s decision. Only right, then, that having found Charlotte Caine of Claremont’s The Three Helens that I share it with you.
I’m on it. Doing it right now.

Charming and friendly
Yet firm when she needs
With vision, courage and purpose
Is how this first lady leads

Voted “The Best Mayor in the World” [Is this going to scan? – Ed.]
Always giving her extraordinary all [No. No, it’s not. – Ed.]
She has always steered the way forward [Double use of ‘always’. – Ed.]
In showing us how to stand tall [Utterly dreadful. – Ed.]

She has gone from strength to strength
She stands above the crowd
She always goes the extra length [It’s ‘goes the extra mile’, ne? – Ed.]
She has made this country proud [Double rhyming couplet special bonus. – Ed.]

Completing an industrious trio of Helens
Helen Suzman, Helen Joseph, Helen Zille [Keller? Mirren? No? – Ed.]
With dedication, intelligence and determination
Each one a warrior; each one a winner [This doesn’t rhyme. Just saying. – Ed]

[Rather awkward and stumbled a bit towards the end. A bit like her, I suppose. – Ed.]

A couple of points here. Firstly, that since (I’m assuming) the Southern Suburbs Tatler must have been near inundated with several (or more) poems saying how great Helen Zille was, this is ever so slightly disappointing on the quality front. How poor were the others? Were the rest of them just racist outbursts from angry, privileged, Southern Suburbs, white-bearded men? Well, yes. Yes, they were.
This is surely the only reason for fielding these six stanzae.
And then secondly, that in this isibongo, there is no mention of Helen’s continual Twitter meltdowns. And yet this makes up at least [a lot] of her legacy, indomitable or otherwise. So here you go:

Of course she has her dark side too
Like when she rants on twitter
And calls Simphiwe Dana
An ill-informed, arrogant critter

Yeah, I know. It was rushed, inaccurate, it doesn’t scan, it’s rather forced and poorly laid out. Fits right on the end of Charlotte’s work perfectly then. Hashtag seamless.

I’m almost (almost) tempted to write a whole Helen Zille poem, but right now I have to go home and build a flat pack table (uThug Life) so that’ll just have to wait.

Enjoy your long weekend, SA. We’ll be back with more tomorrow. And the day after. And on Monday. No rest for the well wicked, innit?

Burgers here with the boys of the MBCC last night. It was fun.

Burgers: 9. Damn fine burgers, as you might expect from a place that markets itself on its burgers. I had the iconic BOOM BOOM burger, though I could have chosen one of the others from the menu if I had so desired. That’s why they have a menu.

Beer: 9. Nice selection of draughts and bottles. Black Label and Jack Black on tap. Lots of craft, but sadly, very little (branded) One One Eight.

Service: 9. With a smile. Loses one mark because it plainly has an overtly sexist employment policy for waiting staff. If my boy ever wants to work here, he’ll have to somehow be sporting an utterly spectacular cleavage at interview.

Price: 9. Is cheap cheap, eh? Chili popper starter, 250g burger, “frites”, a couple of large draught beers, a coffee (someone substituted an excellent waffle here) and a double whiskey (and tip) came to R250pp. That total is only a little more than the price of (just) a big steak down the road at Barristers. The Barristers steak will be absolute perfection, though.

Music: 9. A bewilderingly random selection featuring Billy Joel, The Bangles, Berri, The Troggs, absolutely no One Direction and more. One after the other. But it worked. All of it. Oh, the memories.

Extractor fans: 1. Got home smelling like I’d been working in their kitchen, which – despite having had a few beers and a nightcap – I’m pretty sure I didn’t. You’re cooking several (or more) burgers each evening. There will be fatty smoke. Deal with it better.

But overall, it’s a pretty decent score (you can do the maths), just let down by the that lack of adequate exhaust from the grill. And I’m sure that once they read this, they’ll sort that forthwith.

This was an excellent night out and drops neatly into the 6000 recommends… category.