Ah, remember back in 2011 when the Chinese Tiangong-1 space station was launched from the Gobi Desert, setting off on its five-year mission to explore strange new worlds, to seek out new life and new civilisations, to boldly go where no man has gone bef… Look, they launched a big space station.

Why is this relevant to you or I? Well, now it seems that they have lost control of said space station and it’s going to plunge back to earth “sometime in 2017”. And if that seems vague, then understand this:

Those would be the words of Jonathan McDowell, renowned Harvard astrophysicist and space industry enthusiast. He continues:

You really can’t steer these things. Even a couple of days before it re-enters we probably won’t know better than six or seven hours, plus or minus, when it’s going to come down. A slight change in atmospheric conditions could nudge the landing site from one continent to the next.

But thankfully, between us and the stricken satellite is the atmosphere: all round lekker ding and protective blanket around our flimsy planet with its fragile residents. And we all know that things entering or re-entering the earth’s atmosphere generally burn up harmlessly.

There will be lumps of about 100kg or so, still enough to give you a nasty wallop if it hit you.

Yes there’s a chance it will do damage, it might take out someone’s car, there will be a rain of a few pieces of metal, it might go through someone’s roof…

Of course, you’d have to be pretty unlucky to be hit by any of this debris, but – without wanting to cause any sort of panic – I’d think that “a nasty wallop” might be a slight understatement as to the effect it might have if it was to land on you.

Tiangong-1 is currently intact and  authorities will continue to monitor it and strengthen early warning for possible collision with objects.
If necessary, China will release a forecast of its falling and report it internationally.

How very generous of them.

We’ll be keeping an eye on this story over the next 3 to 15 months (seriously – no-one has a single clue when this thing is going to crash), and keep you informed of what we learn and the location of the best caves in the expected landing area. 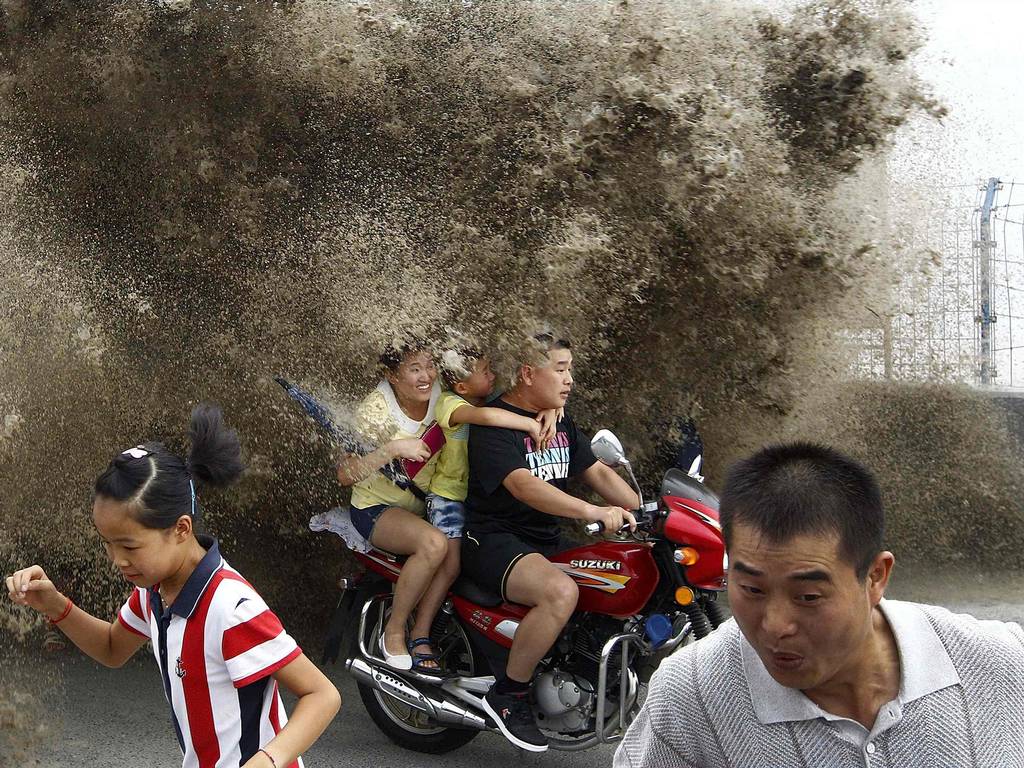 Which is apparently a photo of

a wave caused by a tidal bore surging past a barrier on the banks of Qiantang River, in Hangzhou, Zhejiang province, China.

Obviously, time is frozen in every photo, but it seems even more so in this one. The absolute relaxed obliviousness of the man on the motorcycle, accentuated by the chaos in the scene behind him, is wonderful.
And don’t miss the umbrella on the woman’s arm on the back of the bike either. Instantly functionless and overwhelmed by muddy water, like any regional government during a bad flood.
And the juxtaposition of the anchor – traditionally a symbol of stability against the power of water – on the shirt of the girl fleeing from the moist onslaught.
And the expression on the face of the guy nearest the camera, demonstrating that the term “Oooh, shit!” easily transcends any artificial construct of language.

Or it could just be some people about to get wet.

Thought of you immediately!

Now, usually, I would be flattered to be thought of immediately on many occasions; it’s nice to be at the forefront of people’s minds. However, having said that, I’m not sure that the death of a man from bubonic plague and the subsequent sealing off of a city of 30,000 people in China is one of those occasions.
And I want to make it absolutely clear that I had nothing to do with this incident.

What is interesting is the publicity that this story has got. As I write, it is the most read article in the World News section of the Guardian website in the last 24 hours. And, given the pretty stiff competition (MH17, Israel and Gaza, Sheffield United manager Nigel Clough trying to buy another striker), that’s fairly impressive stuff. Yay microbiology.
The thing is, sporadic cases of bubonic plague are actually fairly regular occurrences all over the world: 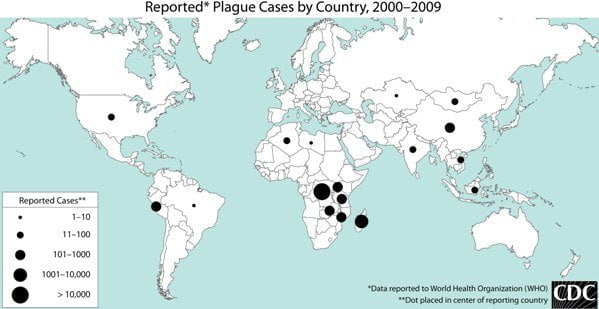 With even (as you’ll have noted) a handful of cases in the USA each year:

And yet, no-one has ever – to my knowledge, anyway – thought of me immediately in any of these situations. Perhaps because they haven’t made the international headlines, which makes one wonder why this one has. True, it’s a rather draconian reaction by the Chinese authorities to one death, but then it’s not like they’re not renowned for that sort of behaviour. It does rather leave one wondering if the Guardian journalist in question saw BLACK DEATH! and didn’t do any background reading before breaking the story before anyone else got chance to. But then, I can’t believe that a journalist would put sensationalism before research.

Either way, I’m always happy to hear about microbiology stories in the news (it is, after all, the best Science in the World) and what better place for you to share it with a willing audience than via the 6000.co.za Facebook page, which you can like by visiting it (the blog facebook page, that is) here.

UPDATE: Sky News finally catches up with the story, add nothing.

As I’ve mentioned several times on here, infectious diseases are far from being beaten by the supposed might of humankind. In fact, they’re actually winning our war against them, what with their rapid reproduction and their pacy genetic mutations. Still, we have had some small successes.
One of the other things which makes life difficult for us puny humans is the diverse tactics which we have to employ in order to achieve these positive outcomes. And here come a couple of good cases in point.

China has more than halved its tuberculosis (TB) prevalence.
Now, as you’ll know, TB is very close to my heart (not literally), and this is truly a huge battle for China to have won/be winning. It’s being fought with the joint weaponry of money, organisation and a huge expansion of a community-based disease control programme.

Lead researcher Dr Yu Wang, from the Chinese Centre for Disease Control and Prevention in Beijing, said: “One of the key global TB targets set by the Stop TB Partnership aims to reduce tuberculosis prevalence by 50% between 1990 and 2015.
This study in China is the first to show the feasibility of achieving such a target, and China achieved this five years earlier than the target date.”

And it gives hope for other countries with high TB rates, South Africa included. And we do have, even as part of this apparently completely dysfunctional government of ours, a pretty decent guy heading up the Department of Health. I have high hopes that he will be very interested in this aggressive approach demonstrated by China. As we know:

TB remains a big issue in many countries, including India, Russia and many African nations. Better diagnostic tools and treatments are still needed.

Indeed. No quick fix here, but please be aware that I’m working on it.

[Health Minister] Mr Lamah announced the ban on the sale and consumption of bats during a tour of Forest Region, the epicentre of the epidemic, reports the BBC’s Alhassan Sillah from the capital, Conakry.

People who eat the animals often boil them into a sort of spicy pepper soup, our correspondent says. The soup is sold in village stores where people gather to drink alcohol.
Other ways of preparing the bats to eat include drying them over a fire.

And yes, Ebola loves bats. They’re widely recognised as the probable reservoir for the virus (i.e. where it hangs out before it kills loads of humans) and if you’re going to eat a bat packed full of Ebola virus, surprise surprise, you’re going to catch Ebola virus.

Ensuring that Guinea’s Ebola patients take a cocktail of antibiotics daily, as China has done with its TB patients, would have about as much effect as preventing those Chinese TB patients from eating bats.

There is no one set approach here, no magic bullet. Different diseases require radically different methods of prevention and cure.
It’s nice that we’re beginning to get at least some of them right.

Awkward questions are going to be asked of the Indian Army, as it was revealed that they had been tracking over 320 unidentified flying objects over six months on the disputed Himalayan border between India and China. These were believed by the Indians to be Chinese Spy Drones and raised the tensions on the border. Worrying times:

Tensions have been high in the disputed Himalayan border area between the two nations in recent years, with India frequently accusing its neighbour of making incursions onto its territory. Things came to a head during a stand-off in April when Chinese troops were accused of erecting a camp on the Indian side of the de facto boundary known as the Line of Actual Control (LAC). By that stage, Indian troops had already documented 329 sightings of unidentified objects over a lake in the border region.

Except, it turns out that they weren’t actually Chinese Spy Drones at all. They were planets.

No, the Chinese hadn’t roped in Jupiter and Venus to assist in surveillance of the Indian troop movements; the planets were just doing their thing in the sky, as they do and the paranoid Indians erroneously identified them as spy planes.

I know. This sort of thing sounds implausible, but it happens, so here’s my quick guide to distinguishing between Chinese Spy Drones and Jupiter.

Firstly, there are some similarities: both are unmanned.

To be honest, this should be enough for someone to reasonable tell the difference between a Chinese Spy Drone and Jupiter, but just in case it’s not, only one of them would be taking covert surveillance video of your military positions.

And it’s not Jupiter.