It seems that Pick n Pay Constantia have imported some fancy French cheese. And now they’re going to have to try and sell it. The cheese in question is La Tradition‘s version of Époisses. I looked up some more information about it.

This odious cow’s milk cheese is produced in the village Époisses, in the eastern part of France. It’s rinsed in Marc de Bourgogne brandy until it starts to waft the smell of sour milk, making it the stinkiest cheese on this list [6000 note: There were only three cheeses on the list]. In fact, the stench is so potent that French law has officially banned it from the Parisian public transport system. It’s a legal offense to carry it on your person.

I have no evidence for their claim of Époisses-related Parisian public transport system ban, although there is a general RATP rule on carrying nasty things on their system, which might fit:

The cheese is packed full of bacterial organisms of the listeria group, making it one of the most dangerous foodstuffs of the earth. It’s been held culprit for spreading serious diseases that are sometimes fatal. As a result, Époisses is only allowed to be imported into the United States if it has been aged not more than 49 days.

I have no evidence for their claim of Époisses-related fatalities, but the microbiology might fit in some cases, should the cheese not have been manufactured in optimally hygienic conditions. 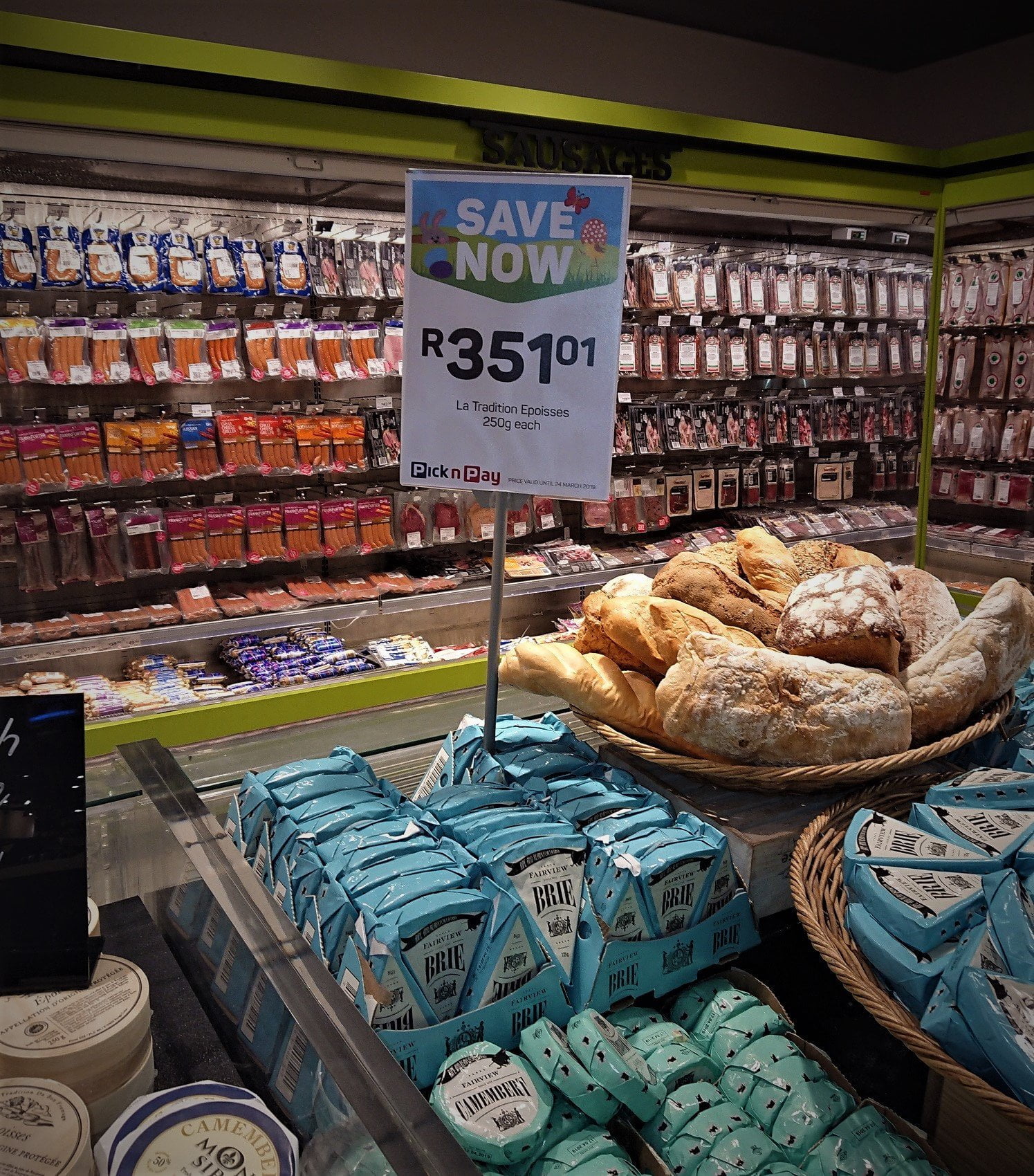 But wouldn’t you have loved to have been a fly on the wall at the meeting that decided to set the retail price at that exact level?

Middle management man in shirt: “Right, next on the agenda… Mmm. The cheese department have brought in some Époisses. It is a top end product and we are a flagship supermarket, even though a lot of the stuff we sell is past its use by date. I was thinking that we should go for something around the R300 mark.”

Boss man in shirt: “Are you mad? We’ll just lose money. This stuff cost a lot to get over here and it’s a world leading product. R350, minimum.”

Junior man in shirt: “Er… boss: if we go for R350, we’re still only just breaking even, and that’s only if the customer then goes and buys some expensive bread from our expensive bread department. Which they will, because they clearly have money to burn, even in this fragile and uncertain economy.”

Boss man in shirt: “Good point, Junior man in shirt. OK, R355 then. Any higher and we risk it not getting sold.”

Boss man in shirt: [pulling rank just for the sake of it] “Point taken, but no: we have 40 units to sell and we need to make an extra 40 cents overall. I’m setting the price at R351.01. Print the signs and put them up amongst some much cheaper local cheeses just to confuse the customers.”

I’m not buying any Époisses. Not at that price and, given its reputation for getting a bit iffy with age, certainly not at that supermarket. Nor will I be sponsoring anyone else to get any. 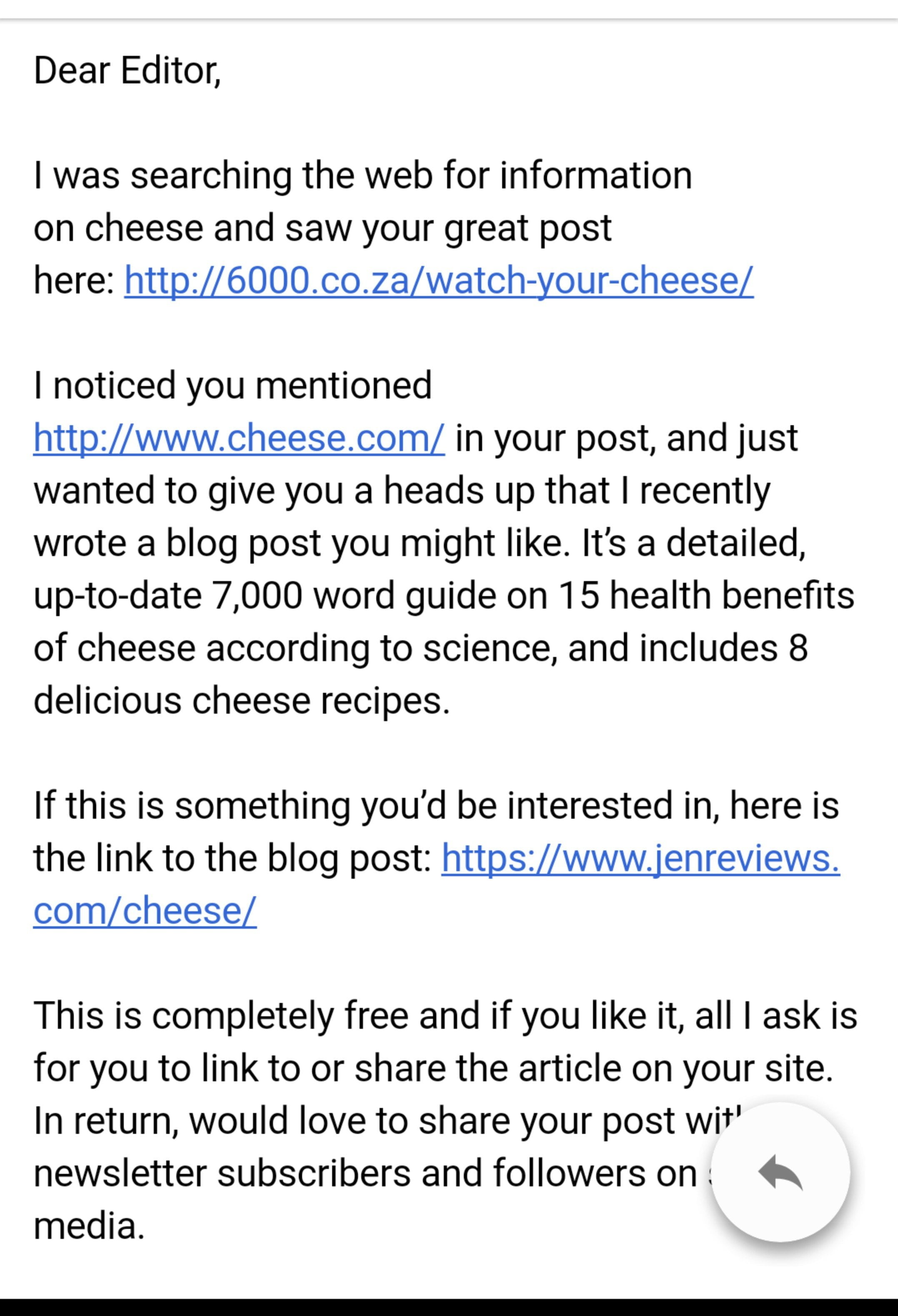 I love the way that first paragraph trips off the tongue. Jesse is a down to earth kinda guy and/or girl. Approachable. Level-headed. Just like you and/or me. Because haven’t we all, at some stage in our lives, searched the web for information on cheese? I know I have. I’m pretty sure you have too. And yes, Watch Your Cheese was a superb post – the one in which I subscribe Andile Lungisa for the near incomparable newsletter from the near incomparable cheese.com.

I might not have to go there anymore though, because Jesse has written 7000 – wait, seven thousand?!??! Sweet baby cheeses… That’s a lot of words about cheese – almost 500 per health benefit. Anyway, those 7000 words about cheese are right here. Thirteen of those words are:

However, not all cheeses are created equal. Most cheeses get a bad rap.

Presumably, Jesse means this one:

Anyway, I’ve given Jesse the publicity he/she/it requested and I’ve shared an appalling song about cheese. All that is left to do is to sign up Andile Lungisa to JenReviews’ newsletter…

…and now I’ve done that too.

Thanks to the Cambridge News for this one. If you thought that nothing ever happened in Cambridge apart from posh students doing posh studenty things, then you’d be nearly correct. Phillip Emery tried to change all that though, and in doing so, gave his local newspaper the opportunity to pen this headline:

And how did they arrive at this headline? Well, because:

Officers arrived at Phillip Emery’s home following a call from his landlord to find him eating cheese with a large knife sat next to a blowtorch and gas canister.

Fantastic. Could Emery be the Cambridge equivalent of Wallace?
“Cracking Wensleydale, Gromit! Nice big knife, too! Now, shall we blow some coppers up?”

And having been separated from his potentially lethal gas canister by the brave officers of the law, Emery:

…then threatened to blow up the house using the gas supply, even though it did not have one.

Go on then, mate! That should be worth watching.

I am well aware that cheese is meant to give you nightmares, but I think in this case, Emery’s unusual behaviour can probably be put down to the drugs that he had been taking earlier in the evening.

After the young firebrands such as Malema and Shivambu have had their say, in steps “oily creature” Andile Lungisa, ex deputy-Pres of the ANCYL and now chairman of the National Youth Development Agency, with his loud words and hot air. Well, mainly hot air, anyway.

In a speech at the Black Management Forum young professionals’ summit in Cape Town last week, he threatened the usual people (“Stellenbosch mafia”, government, the DA etc etc etc) with the  usual stuff: We will make SA ungovernable, we will close every street, blah, blah, blah.

And then he threatened something else that made everyone sit up and notice:

If there is a cheese in your fridge, they are going to take it

They’re going to what?!?
Look, as much as I like my countries governable and my streets open, I can manage for a short while if things have to change. But when you start threatening to take the cheese from my fridge?
Well, that’s going a bit too far, Mr Lungisa.

Why not rather begin at Checkers with their much-advertised Cheese World? After all, they bring you more than 400 cheeses to choose from. I’ve just had a quick peek in my fridge and all I’ve got is a bit of week-old Gouda.
Mind you, maybe it doesn’t actually matter what sort of cheese it is, maybe any cheese will do? (There’s a song in there, somewhere…)
Will the issues you have raised only be sorted by a decent Gruyere or a mature Roquefort? Do younger fridge raiders have to go for the Mini Babybels? So many questions.
Anyway, if it’s going to take something a little different to pacify you, Checkers say that if you can’t find the cheese you’re looking for, they’ll find it for you.

Once they’ve got the requisite cheese in their fridge, then you can go and take it.

I accept that youth unemployment is a big issue in SA and that it desperately needs addressing, but I fail to see how the theft of dairy products from private individuals is going to assist this cause. If the youth really do need cheese, why not help them out with a bit of brie bought with some of the R350,000,000 that the SA government gave your organisation this year?
Maybe chuck some cheddar in from your fat R800,000 annual salary, Andile.
I daresay that you might be able to sling in a couple of Salticrax their way as well (after payday, obviously).

But you leave my cheese alone, right?

Sorry. That last line may have seemed a little threatening, angry; a little hot-headed.
But that’s my week old Gouda, ok?
Look, as a gesture of goodwill, Andile, I have signed your email address up for the cheese.com “The #1 resource for all things cheese” “It’s all about the cheese!” newsletter.
I trust that with their expert assistance, you and your organisation can remedy this country’s ills within no time at all.
Good luck.