I may be English, but I’m not a huge fan of tea. Sure, I’ll drink it if I’m thirsty and the only other option is battery acid, but it has to be said that thankfully, this is not a situation I’ve ever found myself in. Yet.

Michael Davis, a Canadian resident, had some leftover tea and, rather than pouring it into the sink like any sensible person would have done, he flung it dramatically into the freezing air with this rather spectacular result: 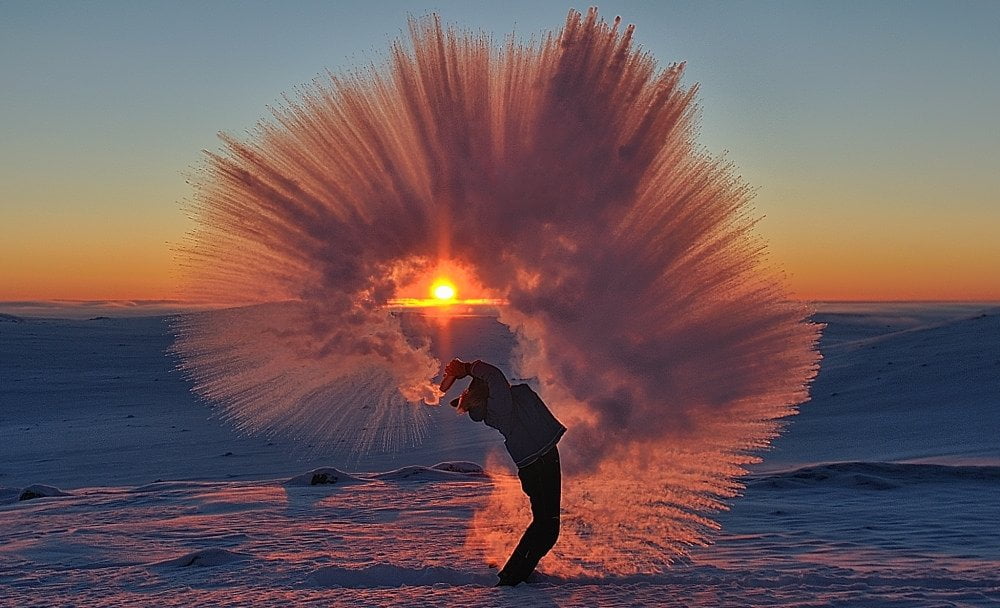 Other images on Michael’s Flickr which didn’t quite manage the same level of sheer wonder (this one and this one) suggest that he had been drinking a lot of tea that morning, which, given that he apparently ended up chucking away the last fifty (or more) percent of each brew, seems both foolish and wasteful. Silly boy.

So why does tea do this? Wired knows.

A pot of boiling water can be thrown into the air on a cold winter day, and it freezes in mid air creating a shower of ice crystals. Whereas a pot of cold water thrown into the air comes down as large blobs of water. This happens because the hot water is so close to being steam, that the act of throwing it into the air causes it to break up into tiny droplets (hot water is less viscous than cold water, listen to the sound it makes when you pour it in the sink). The small water droplets have a large surface area which allows for a great deal of evaporation, this removes heat quickly. And finally, the cooled droplets are so small, that they can be easily frozen by the winter air.

Michael tells us that it was -40 degrees when he took the photo. He doesn’t say if that’s Fahrenheit or Celsius, but THAT DOESN’T MATTER! because -40 is the magic number at which these two temperature scales magically cross, in a magical manner.

The results are unlikely to be as pretty as Michael’s.

Sadly, it’s all too late. The Rhinoceros Party of Canada became extinct in 1993. Not due to excessive poaching to supply any lucrative South East Asian market, but probably simply down to a lack of votes.

South Africa has 19 new political parties, all vying for your vote ahead of next years elections and with great names like the Bolsheviks Party of SA and the Nehemiah Liberation Christian Party. I’M SURE THEY’LL DO JUST BRILLIANTLY NEXT APRIL.

But amazingly, we don’t have a Rhinoceros Party. And even if we did, it wouldn’t really be as good as the Canadian Rhinoceros Party (RIP). Because they wouldn’t have brilliant policies like a promise to repeal the law of gravity, putting the national debt on Visa and declaring war on Belgium, along with the rather more typical political promise of “promising to keep none of our promises.”
Yet some of these are really good ideas.

Yes, this was a comedic parody party, made up of artists and poets, and yet they polled almost 2.5% of the vote in a couple of elections in the 1980s. That’s almost 30 times as much as our local comedy party, The Cape Party got in their last outing.

Go and visit that wikipedia page, because they had many other wonderful ideas that could surely be adapted to our local political and geographical landscape to make South Africa a better place for us all to be.

Until election time, celery and sidewalks. Thank you. Good night. 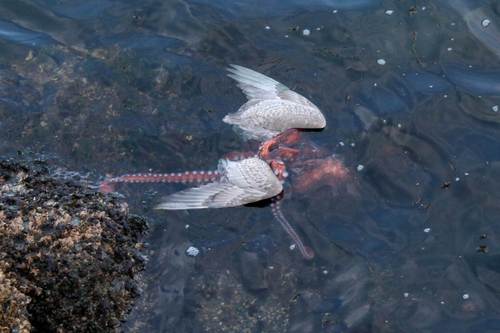 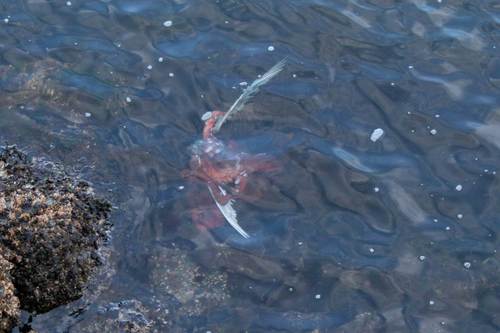 Following allegations from his wife that he only married her to stay in Canada, the Brandon Huntley saga rumbles on, with new allegations surfacing today that the “white” man that “blacks” love to hate may not actually be “white” at all. Which make his ongoing allegations that black people attack him simply because he is white seem even funnier.

A new study has revealed that Brandon Huntley, who has been granted asylum in Canada after claiming to have been attacked by blacks several times, is the new black. Or more precisely, the former Capetonian is the descendant of one Francina van der Kaap, a woman “of colour”, and more than half of his relatives are similarly coloured – in the verbal sense.

I don’t want to turn this into a racial thing – and I’d be far too late anyway, because Huntley turned it into a racial thing with his ridiculous claims in the first place – and the boundaries and definitions of race in South Africa are complex, clumsy and overused.

However, there is some good news for Huntley; now that it appears to have been shown that his roots are not as pale as previously thought, Julius Malema will surely be at OR Tambo International to welcome him “home” when he is finally deported.

Having just arrived home after a hellish day, I find that I have a hellish evening in front of me.

Although I wanted to blog about Justice Malala’s column in The Times this morning, I have to empty the old study completely this evening so that it can be converted into a playroom for the kids – tomorrow – even though my new study (or my new playroom, depending on how you look at it) is yet to be completed. Thus, I am going to be struggling for space and connectivity for a week or so and I have absolutely no time spare for blogging this evening. Joy.

Anyway – that column had some iffy writing at the start (in my humble opinion), made some rather unfounded claims in the middle and ended with a weak, watery and emotional conclusion, but did hit a few nails on a few heads in between.

The real problem with the Huntley decision is its unbelievable ignorance. Those from the middle classes, such as myself, suffer from crime daily. The majority of this class is white. This class happens to have a voice, reach and power. The stories of middle-class and primarily white suffering from crime make the news headlines every day.

Democratic South Africa is 15 years old. Before that we had 46 years of apartheid racism characterised by ruthless enforcement of policies aimed at keeping blacks down and pushing whites up. The division and racism that characterised apartheid South Africa can still be seen in many parts of our country: in business hierarchies, in school pass rates, in academia.

The number of blacks who have broken out of the poverty imposed by the apartheid reality remains minuscule. We can have debates about how one resolves this, but the reality exists — and persists. And therein lies the rub. Are whites targeted by criminals? The Canadian panel seems to have swallowed this story. In its own perverse way, the panel’s decision reflects the hugely skewed manner in which many in our own country and others in the outside world view South Africa.

Which is basically what I have been saying all along. It’s not that Huntley’s stories were untrue – it’s just that they were unrepresentative. That’s why there’s been all the fuss about the whole affair and that’s why – apparently – he’s about to be kicked out of Canada.
Now, if you’ll excuse me, I’m about to get kicked out of my study.