For some reason, this BBC comedy clip from last Christmas seems to be getting a lot of hits this week, so it seems perfectly reasonable to share it again:

We did warn you to steer clear of BB.
Maybe next time you’ll listen to the voice of reason.

That’s not my line up there in the title, it belongs to Business Insider, who published this astounding graph on their site yesterday. 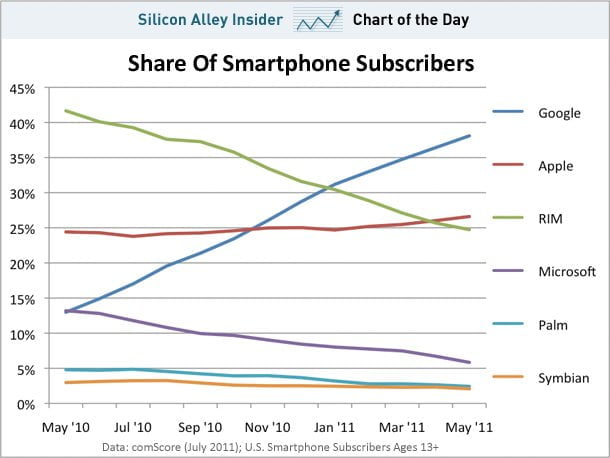 In my line of work, I’m well used to looking at graphs and attempting to observe subtle differences and trends within the data.
This isn’t one of them though, is it?

And while the blue Android line is rising, the green BB is in freefall, which should come as no surprise to anyone. (Least of all anyone who has talked to my wife).

This has been doing the rounds all over the internet since it came out last week, but it needs to be here too, just in case anyone missed it:
Gizmodo’s Ten Reasons Why BlackBerry Is Screwed.

While BB came out as the coolest brand amongst the youth in South Africa in the recent Sunday Times Generation Y survey, it seems that the South African Youth is sadly not really in touch with reality (who’d have believed it?). While BB holds the lion’s share of the smartphone market in SA, it’s all beginning to unravel worldwide.

A lack of new products, a lack of innovation, a particularly pathetic tablet offering, a lack of decent apps and some strong competition from Android and Apple that RIM seem to have no answer to and it really looks like they could be headed the same way as Nokia.
As the article points out, when BB are losing their stronghold on the corporate market, something is obviously going very wrong.

As for the stat that more than 50% of all current BB users want to change to a different smartphone platform on their next upgrade, I can well believe it: exactly 100% of the current BB users in this household would rather be on anything other than her BB.

Incoming for our friends at Ogilvy in Cape Town (and belatedly blogged), the results of the the Sunday Times Generation Next 2011 Brand Survey, conducted by HDI Youth Marketeers.

This is a hugely useful survey for companies wanting to market to young people, with loads of results for what is “cool” according to the more than 7,200 youths (aged 8-22 Julius, ok?) questioned in the survey. Toothpaste to Comedians, DJ’s to Fashion, it’s all in there and it’s making me feel old.

One thing that did stand out was Blackberry, which came top of the “Coolest Cellphone”, “Coolest High Tech Gadget” and – most interestingly of all – “Coolest Brand Overall” categories. This is conclusive proof that something doesn’t have to actually be very good to be very cool.

Blackberry phones, when compared (rationally and unemotionally) to other smartphones on the market (i.e. iPhone or Android) are actually pretty rubbish, but they have BBM, as Jason Levin, managing director of HDI explains:

BBM is the archetypal ‘killer app’ – it’s one of the best examples ever of intrinsic functionality driving demand for a cell phone … or any device for that matter.
BBM turned the Blackberry, originally a smart phone used for business purposes, into a cool-tool for youth.

And he’s right. Because if that’s all you want from your phone, then BB is the one for the job. And while BB users are desperate to have the functionality and stability of other phones, other phone users would kill to have BBM. Fortunately, it might not be long before that happens. And if/when it does, how long before the “killer app” effect wears off for Blackberry?

Good news for BB then and many of the other brands in there who will be hoping to get their hands on the R95bn that the under-23 market spends in SA each year.

Disclosure: Ogilvy sent 6000 miles… a Goodie Bag containing products from many award winners and nominees. (But no Blackberry)

Get an Android phone.

Er… that’s about it.