Going to see Ed Sheeran at one of his upcoming concerts in Johannesbeagle or Cape Town?

Think you can turn up with just a ticket and walk right in?

There are several (or more) documents that you might need to provide on the night if you’re going to be allowed in to see and hear the ginger crooner. I found this out quite by chance – Big Concerts hasn’t yet been in touch to tell me about it. That’s why I’m sharing it with you.
Because I bought tickets for Mrs 6000 and The Scoop and they wouldn’t have got in if I hadn’t seen this page, featuring this information: 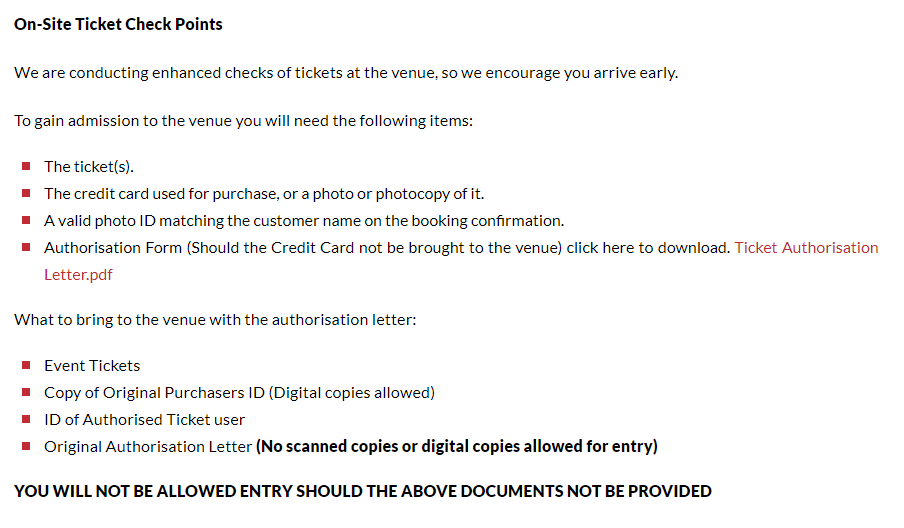 There’s a similar one for Joburg too.

And yes, it’ll be a mess and they’ll end up not checking everyone’s documents and people will complain that they brought them along for nothing. And yes, some people who do get checked will not have the documentation and there will be some shouting and a fight.

It’s even a bit vague about what you actually need to bring, and given that this is an event in South Africa, so the security probably won’t have been suitably briefed anyway, I’d bring everything on the list. And lots of other things too.
Smile nicely, be polite throughout, baffle with bullshit, gain entry.
Standard practice.

As usual, I would wholeheartedly advise parking in the P1 parking at the CTICC for a quick getaway once you’ve shuttled (free) into town from the stadium.

Please share this information so no-one gets locked out. Ed might not be your cup of tea (he’s certainly not mine), but imagine missing a concert you had bought tickets for, simply because you didn’t have a printed A4 PDF with someone’s name on it. Madness.

OK, so here it is. The thing which I was too tired to write last night. A quick run down of my experiences with my son at the Cape Town Sevens Finals Day yesterday.

The parking: I’ve told you how to do this before, but ok, I’ll tell you again. You park at the CTICC (right hand lane off the elevated freeway, almost as if you were about to do a U-turn to go back out of town at Walter Sisulu) and walk through to the Civic Centre (it’s 900m, you’ll manage), from where you get the shuttle bus up to the stadium.
On your return, you get the bus to Thibault Square, and walk down Lower Long to the CTICC (it’s 600m, you’ll be fine).
The parking lot exits directly onto the elevated freeway, so no traffic problems at all. So it’s faster, cheaper and easier than the Waterfront. Or virtually anywhere else.

The stadium: I’ve been to several concerts, many football and rugby events and precisely no happy-clappy  religious gatherings at the stadium, and (without meaning to be negative) each of them has had their own little niggles. Not yesterday. The experience was flawless. Friendly staff, little (or no) queuing for refreshments (including at the bars), a wide variety of foods, lots of activities and freebies for the kids. Brilliant.

The entertainment: Lots going on between the games kept us interested. Dancing, music, beagle herding, enthusiastic MCs. The highlight for us (and many others, I suspect) was the “Rugby Skills” competition for a few happily inebriated fans towards the end. Very funny and very well managed.

The rugby: It was good fun and played in good spirit, as it should be. England were in self-destruct mode, New Zealand were in we’re-out-to-shock-the-opposition mode, the USA was basically just speed and muscle and the Fijians were just muscle. And then there was the Blitzbokke, who were clear favourites for the win.

But that didn’t happen, which brings me to my final point.

The crowd: Oh dear. I’m going to get into trouble for writing this, but that’s rarely stopped me before, so here goes.

We’re repeatedly told that Cape Town is the “best” leg of the 7s. I don’t know how they work these sort of things out – hey, maybe they tell everyone that their event is the best. That would be a bit naughty, but then, people are a bit naughty sometimes.

The thing is, if this alleged optimal status has really been bestowed upon Cape Town’s event, then it must surely only be for the fancy dress and the partying. Because yes, Cape Town does do the fancy dress and the partying very well. When it comes to actually supporting the rugby though, the fans are fickle and fairweather (OMG, he said it! And now see how the hordes are gathering their flaming torches and pitchforks! OMG! I can’t bear to watch!).

I took a few pics to illustrate my point.

Here’s the scene as the Blitzbokke played their first game (a fortuitous, ref-assisted win over Fiji). 60,000 fans in full voice: 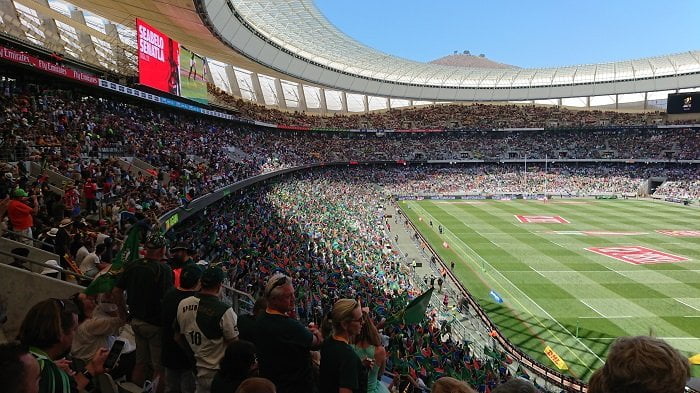 Incredible gees, colour, passion, volume etc etc (allowing for iconic imagery like this). And it was the same for the second game against New Zealand. But when they lost that, and with it, any chance of winning the event, this was the scene during their last game of the day – a third place play off against Canada: 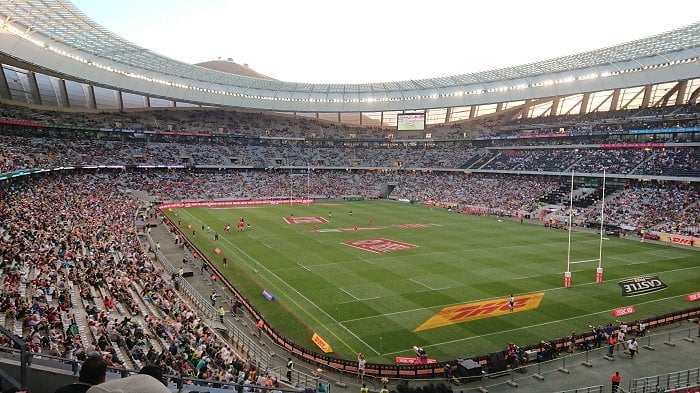 Either a shedload of fans couldn’t actually be bothered any more, or else they had turned up in grey plastic seat fancy dress.

And it got worse. Even more people left before the New Zealand v Argentina Final: 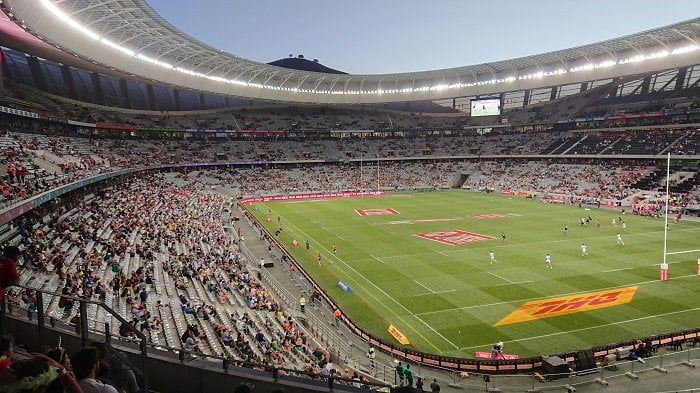 and we were one of only a few hundred that stayed for the Trophy presentation: 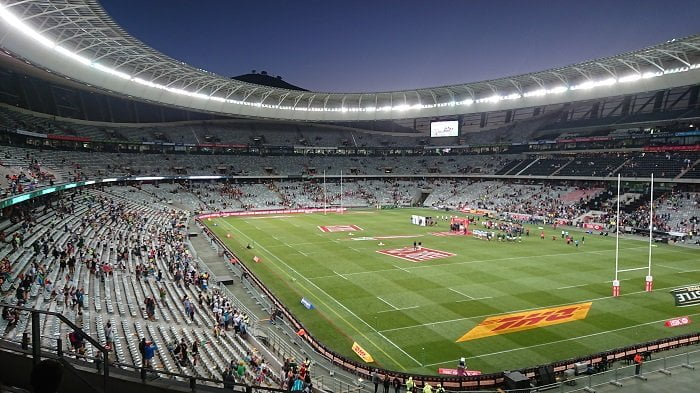 OK. So some points here:

I don’t know if this happens at every 7s event. Do Australian fans leave once their team has been beaten once in Sydney? Is the same in England, Scotland, New Zealand, Canada and the USA? And if it is, does anyone even bother to turn up to watch in Dubai and Singapore?

There were very few people in the stands to see Wales v Russia, because it’s a meh game between two sides who lost a lot on Day 1 – well, ok. Equally though, that won’t be replayed all around the rugby-playing world. The final (and the trophy presentation thereafter, will). It’s not a great advert for the event when it’s being played (or presented) in front of tens of thousands of empty seats. And yet we all cried about not getting the Rugby World Cup in 2023.

That said, the spin is obviously good, because (as I may have mentioned earlier) Cape Town was voted the Best 7s Event on the Tour.

So, all in all, I think it shows a complete lack of manners and it really doesn’t look great on the international stage, but hey – it’s a free country (well, sort of, anyway). I’m not saying that you have to stay until the end. You’re free to leave when you want.
Equally, I’m free to pass comment on you leaving when you want, you disrespectful, fair-weather, part-time, so-called rugby supporters.