This has been on the internet a lot over the past week, but I’m here to mop up the stragglers who haven’t spotted it yet.

You can now enjoy over 16,000 sound effects recorded by the BBC Sound Effects Department. And what’s more, you can download them and use them (with certain conditions applied) wherever you want.

What you can do is use it for non-commercial purposes. Or just have loads of fun with it.

This being the BBC, and these sound effects having been collected over a number of years, they are stuffily described in great detail:

This camera, for example:

Or this cash register:

As if someone looking for a cash register noise was ever going to turn around and say:

“Oh dear. I was looking for a Type Ninety-Six TWO. This will never do. Back to the drawing board, I guess.”

The search feature seems to work very well, which is good, given that there are 16,013 different files for your delectation.

I was quite intrigued by this offering:

Why can’t our beagle do that? That would be spectacular.
But then I realised that:

The Beagle B.121 Pup is a 1960s British 2–4 seat single-engined training and touring aircraft built by Beagle Aircraft Limited at Shoreham Airport and Rearsby Aerodrome.

If you want to experience a far more realistic version of being a beagle owner, you should listen to this gem:

Dogs: Beagles, Interior, two being fed, fight breaks out at 1’50”, growling and sniffing.

Yep. Sounds pretty much par for the course. 😐

I could go on, but I’m sure you get my point.

But this BBC article – ostensibly about how criminals using drones can or could be detected and brought to justice – does seem to go out of its way in order to portray drones in an extraordinarily bad light. (Which, incidentally, makes for less than ideal flying conditions.)

I mean, just look at the image they chose to illustrate it: 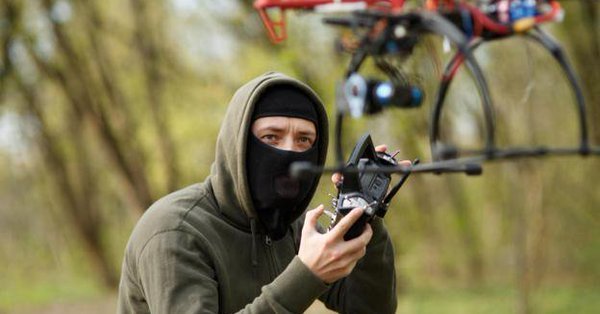 That’s exactly what I look like when I fly my drone.
Furtive. Disguised. Illegal. Determined. Criminal.
(And with a jaunty tilt on my remote control.)

Whether it is flying illicit goods into forbidden places, spying on people, interrupting the work of the emergency services or worrying wild animals or aircraft, the threat they present is growing.

Spying on people? Have you any idea how absolutely amazing your drone equipment has to be to “spy” on people? My Mavic has a 12MP camera. It’s half as powerful as the one on my cellphone. And a lot noisier.
My DSLR and its telephoto lens though? Silent and powerful, like a beagle fart. Amazing for spying on people, and yet its ownership is wholly exempt from any legislation. Hmm.

Sure, someone managed to get some cigarettes and a DVD player (actually quite impressive) into a prison using a drone. And that’s not good. But then, naughty people put mobile phones into chocolate bars to get them “inside”, so should we…  should we ban the sale of Mars bars or something? No. No, we shouldn’t, because they’re delicious and most people just eat them, completely legally.

For the article to then go on and use a quote from a “drone expert” suggesting that drones could be used to disperse bio-weaponised anthrax does seem to be just a teensy-tiny bit scaremongery. Because yes, while it is technically possible, the issue there is not really the drone, but rather the bio-weaponised anthrax, no?

All in all, this does seem to be a disappointingly one-sided article. Yes, it’s about crime and drones, but in telling us about those things, it does seem to suggest that crime is all that drones are going to be used for, tarring all drone pilots with the same sticky brush, and conveniently ignoring the many thousands of us who are operating wholly within the law.
But then of course, we must remember that it’s ever so cool to hate these new-fangled tools of annoyance and terrorism – and their users – at the moment, so maybe it’s just trying to tap into the Daily Mail-created zeitgeist.

I completely understand the need for some legislation around this hobby (both flying drones and production of bio-weaponised anthrax), but I’m growing increasingly tired of the incessant anti-drone rhetoric I seem to be seeing everywhere these days.
I just hope that the individuals charged with making the rules are a little bit less alarmist and blinkered than journo Paul Marks and… well… everyone else, actually.

Who could forget Alan Shearer’s habit of slipping a quick one in every now and again?
Certainly not the BBC: 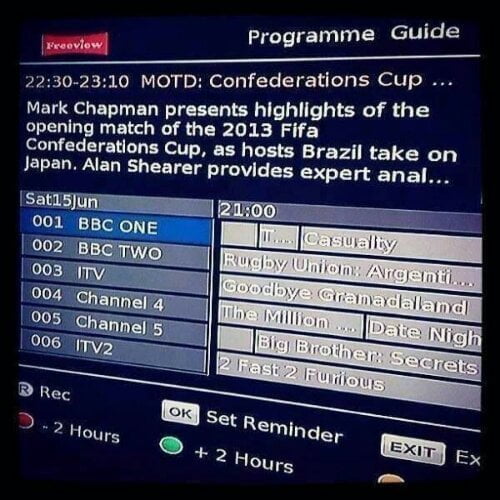 He scores when he wants…

When that BBC report came out, someone remarked on Facebook:

You’d do well not to believe it. Or indeed anything else that uses Ernst Roets as a credible source.

But how was I to know just how right I was?

Do 400,000 whites live in squatter camps in South Africa, as claimed in a recent BBC report. Are there really 80 “white squatter camps” dotted around Pretoria? The answer to both is no.

Africacheck.org has looked at the 2011 census and found out that those figures are (as both the ANC and the DA suggested) inaccurate, exaggerated nonsense:

The claim that 400,000 whites are living in squatter camps is grossly inaccurate. If that were the case, it would mean that roughly ten percent of South Africa’s 4.59-million whites were living in abject poverty.

Census figures suggest that only a tiny fraction of the white population – as little as 7,754 households – are affected.

The claim that there are 80 or more “white squatter camps” in the Pretoria area would also appear to be grossly overstated. Many of the places referred to are not camps at all.

AfriForum’s Roets gave the BBC inaccurate figures and the BBC took them without apparently checking, producing a skewed piece of journalism that failed to accurately reflect reality.

And this on a story that veteran journalist John Simpson put his name to. Very sad.

In no way am I suggesting that the fact that there are 7,754 white households (or the 1,868,325 “black African” households in the same situation) living – existing – in those sort of conditions, is acceptable.

I am, however, suggesting that you shouldn’t believe everything you read on the internet.
Even from the BBC and especially from Ernst Roets.

I am appalled that a seasoned journalist like BBC world affairs editor John Simpson should produce… such a half-arsed, skewed view of reality.
This is an appalling piece of journalism, not worthy of the BBC.

I can’t tell you how sad this is for me:

The world’s longest-running sitcom, Last of the Summer Wine, comes to an end this weekend. In the Yorkshire town where the series is set, fans are preparing to bid farewell to a TV institution.
On a soggy afternoon in Holmfirth, the Last of the Summer Wine tour bus is almost full. Sightseers peer through the rain-streaked windows at the cobbled streets and lush green fields that are part of sitcom history.

In this picturesque setting, three old friends ambled up hill and down dale – pondering life, plotting harebrained schemes and refusing to bow to the passing years.
For the coach load of tourists following in their footsteps, the journey is bittersweet. After 295 episodes, the summer wine has finally run dry.

Last of the Summer Wine was filmed just up the road from Sheffield in the Pennines and always reminds me of the beauty of my home country. When I first came over to SA, I was delighted to find it on DSTV: there’s something comforting about seeing “home” is still there when you’ve made such a big step.

Everyone in Yorkshire could easily identify with the three main characters, Foggy, Clegg and Compo: representing, as they did, varying tiers of British society, and meaning that one of them must have been like your granddad.

That said, it reinforced some terrible stereotypes about “God’s Own County” and the people that lived there (Compo drinking his tea out of his saucer in Ivy’s Tea Room springs immediately to mind), but even that gave it a certain comedic value before a word had even been spoken.

Fair enough, it was never the same once Compo and Foggy left the series (because they died – always a risk when filming a long running series with elderly protagonists, I guess). The more recent efforts were poor in comparison for me, simply because while there were still the ridiculous storylines, they revolved more around secondary characters – but it’s still sad to see it go.