It’s Bank Holiday Monday in the UK – their equivalent of one of our public holidays (specifically the one we had last Tuesday). But this one is the first proper one of Spring there, and is widely regarded as an opportunity to spruce up the house and garden ready for the day they call Summer.

In honour of this, poet Brian Bilston has helpfully rewritten the lyrics to Sheffield band the Arctic Monkeys’ 2006 hit I Bet You Look Good On The Dancefloor with a DIY slant.

Just in case you don’t know the original, here it is: 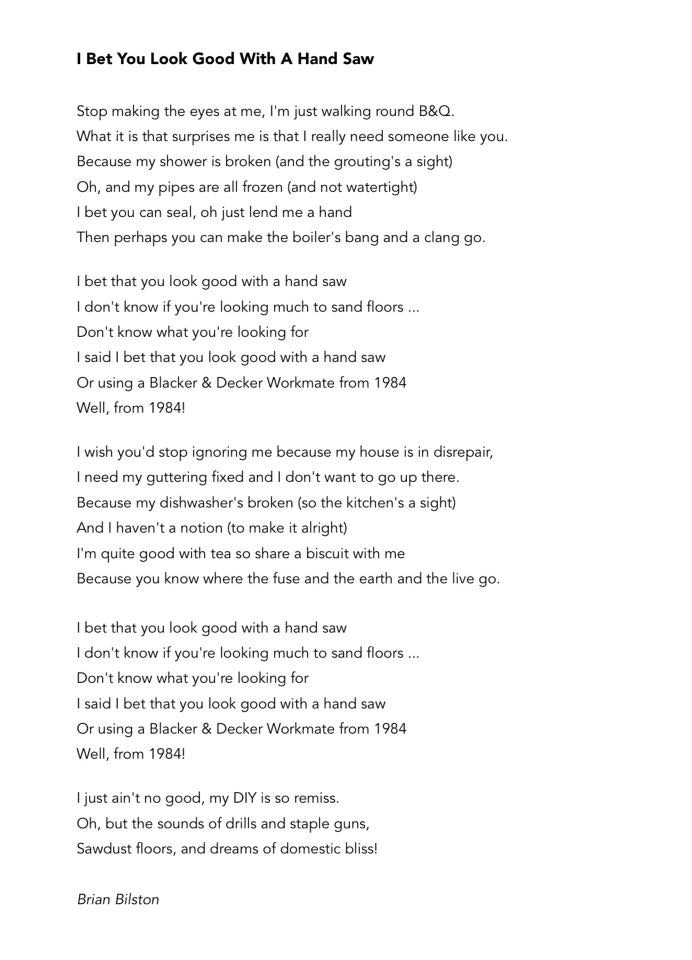 Lifted (in part at least) from the BBC 6 Music article 18 albums we’re looking forward to in 2018. As ever, their selection does differ somewhat from mine, but there is still some correlation.

I heard the “new” Manic Street Preachers single International Blue for the first time yesterday (hey, it’s been December) and I was instantly hooked. Described – accurately – as a sister song to this immortal classic:

…it promises much for their Resistance is Futile album, due early April.

We’re also “promised” offerings from Sleaford Mods, Muse (who knows what we’ll get this time: I’m going for a glam rock orchestral rave electronica classical piano opus), hometown boys the Arctic Monkeys and the rest of those Belle and Sebastian EPs.

That’s a lot of potentially great music to look forward to. 2018 could be almost as good as several of the previous years have been.

In response to this from fellow Sheffield expat @YesWeCrann:

Sheffield folk really are a special breed, mate. We’re so lucky to be from there.

I went looking for some Arctic Monkeys this morning. And I found this wonderful cover version by Chvrches:

Beautifully understated. Lauren Mayberry’s innocent voice was made for this sort of song. The only bit missing was the colloquialism “summat”, which she replaces with the more disappointingly mainstream “something”.

It’s always a toughie when a band is touring. They’re out there promoting their new material, but the fans turn up wanting to have a good night listening to their classics. Finding a suitable balance is always going to be difficult, but apparently, there is some thought that goes into it.
Here’s how my hometown boys and recent 6000 miles… featurees work it out, their strategy revealed by lead guitarist Jamie Cook to NYMag.com.

“The View From the Afternoon”
“When I saw the Strokes at Madison Square Garden, they started with the first song on their first album, and it was great. I thought we should do the same.”

“Brianstorm”
“To start off the set, we play stuff people can dance to.”

And then, that awkward moment discussed above:

“Don’t Sit Down ’Cause I’ve Moved Your Chair”
“This is the first new one, five songs in. Some people are waiting to hear it, and some people are going to be like, F*** this! Why can’t they play an old one?

Before he demonstrates that he’s been to gigs as an audience member as well:

“I Bet You Look Good on the Dancefloor”
“I imagine a fan bringing a date to our show who doesn’t know us that well. We play loads of new stuff, and when we get to ‘Dancefloor,’ he turns to her and says, ‘You’ll definitely know this one.’ If she says, ‘I don’t know this one either,’ that’s when maybe you shouldn’t see much of her again. We’re helping our fans: If they pass this test, it must be love!”

Acknowledging the difficulties of introducing new music on tour:

“She’s Thunderstorms”
“We’d love to go out and be able to play twelve new songs, but that’s not really fair, so there are five new ones on here — this one opens the new album. At the first few gigs, the idea is to test them out and see how they go.”

And ending on the right note:

“Fluorescent Adolescent”
“It’s good for singing along. For the last song, that’s what you need. That’s it! Let’s hope the sun shines, but just in case, bring an umbrella.”

And I agree with most of what he says, but let’s be honest, his hands (and those of every other band on tour promoting a new album) are tied. That might account for the “interesting” guitar work on the new album, incidentally. The fans are not there to hear the new stuff – even when it becomes a hit some way down the line, they won’t remember seeing it live.
There’s no familiarity with a  favourite lyric, no personal link to an event or events in one’s life; there’s no emotion attached to it.

But  – against what the Arctic Monkeys told us “There’s only music so that there’s new ringtones” – without new music, there would be no tours and the whole argument would be rendered invalid anyway. Thus, it looks like the age old recipe of the 70:30 split of old to new. And working on a set of about 20 songs, that still means that you’re going to get 14 of your favourites in.

It’s probably still worth the price of a ticket.

Suck It and See is the fourth studio album from the Arctic Monkeys and is released on 6th June.

The band recently announced two hometown gigs at the Don Valley Bowl on June 10 and 11. They will be headlining the annual V festival occurring August 20-21 with Eminem, Rhianna and Plan B and will also be headlining the T in the Park festival with Coldplay and the Foo Fighters which runs from July 8-10.