Worrying times here at Chez 6000. I took Colin to the vet yesterday evening, and when I got back into the car at the surgery, we were (Colin was) so busy chatting about how good it was to be out of the vet with everything apparently still intact that I quite forgot to restart the soothing music which had accompanied our journey there. And then when we got back to the house, we were (Colin was) so excited to be back home with all four legs and a tail that I quite forgot to take my iPod out of my car.

This morning, when I came to play some music on the way to work, I no longer had an iPod.
I had a Dead Pod. RIP SnoopyToo.

My first thought was that I had left it playing through the extensive collection of tunes and that the battery had given up. I have done that before, but it usually saves just enough battery power to tell me that it has no battery power. This time it was completely dead.

My second thought was that I was going to have to listen to 5fm.

I shed a tear, which immediately froze on my cheek. I may have mentioned that the current climatic conditions in Cape Town are somewhat chilly.
“Hmm,” I thought. “I wonder if that has something to do with it?”

Once at work, I plugged the iPod in, but there was still no sign of life. And so, while I left it plugged in, I did some extensive research (I googled), and apparently, chilly iPod problems are a thing:

When I got in my car on Saturday morning there was still ice all over my car and the iPod was dead, as if the battery was zilch. I put it near a heater vent to warm up while I drove, and still nothing when hooked up to the charger adapter.

I should point out here that my iPod was in a car, in a garage, on a night that only really got down to about 4.5ºC, so we were some distance off the “ice all over my car” scenario. But the symptoms were exactly the same.

Apple says that the operating temperature range of its iPod Classic is -20°C to 45°C. At no point is Cape Town going to trouble the lower end of that scale, although summer will easily top the high end. However, last night did neither.

The good news is that my iPod now seems to be fine. It wasn’t a battery issue (it’s come back to life with a near full battery), so I’m guessing that it was temperature related, despite Apple’s claims.

There’s some good advice on that thread I linked to:

Think back to those warnings you used to see on the back of 5.25″ floppy disks. “If it’s comfortable enough for you, then it’s good enough for your disk,” or something like that. Your iPod just needs to warm up, most likely.

And no. I wouldn’t have wanted to have spent last night in my car.

Welcome back, Snoopy Too.

And judging by the recent traffic on the Apple support forums, I are not alone.
Suffice to say, don’t try and install any updates to the program if you’re running any version of Windows.

Something bad will happen.

Anyway, between trying to fix that, being a dragon guarding some treasure in the garden and heading out to a housewarming this evening, I find that I’m right out of time for posting anything other than this important warning.

Much rejoicing Chez 6000 as it appears that after my only partially successful repair of iTunes last week, I have managed to find another 1788 tracks that were “missing”. I’m still not 100% sure that I will be able to get them onto iTunes, but at least they’re safely somewhere on a hard drive. The next step might be a little messy, but it should be pretty straightforward.

The tracks disappeared when I plugged in my daughter’s prize from Kfm (not that I’m blaming her or them) – a shiny little iPod shuffle she got for dancing in the rain while watching the Two Oceans Marathon last month.

It brought up a beautifully clean iTunes window, to which I added some songs she liked (Coldplay, Freshlyground, Slipknot etc) and all seemed well. However, when I later plugged my Big Daddy iPod in, iTunes comprehensively failed to revert to my previous library, leaving me with about 30 tracks, some of which were by Shakira.

I have since pieced together a rudimentary replacement library, but there were gaps. Massive gaps of several thousand tracks.
I had to root around on external hard drives and the like, but with today’s discovery, there’s “only” a discrepancy of about 900 items. I have yet to check whether they are important items, replaceable items or stuff I can (or will have to) manage without. This may be a difficult task, since sometimes, I’m just heading to the lab when I have a “must listen to” moment. It will be then that these discrepancies will become immediately obvious. Rage will surely ensue.

My advice to you if your 3 year old wins an iPod is not to plug it into your computer. At all. The best way is to find another computer and use iTunes on there. Or sell it on gumtree. It will save you sleepless nights, much wailing and gnashing of teeth.

I’m sure that there is a safe and surefire way of running two (or more) iPods from the same computer. More fool me for ever imagining that Apple would have made it as simple as just plugging the new device into the USB port.
By all means, let me know the best way of doing it in the comments section below, but don’t expect me to let that little silver square anywhere near my desktop ever again.

Remember when we told you that Android was Blowing Everyone Away back in May of this year?

They were on the up, with about 37% of market share, RIM was in freefall (down to 25%) and Apple was doing “ok”, fairly steady at about 25%. Well, now Business Insider have updated that graph for November – 6 months on: 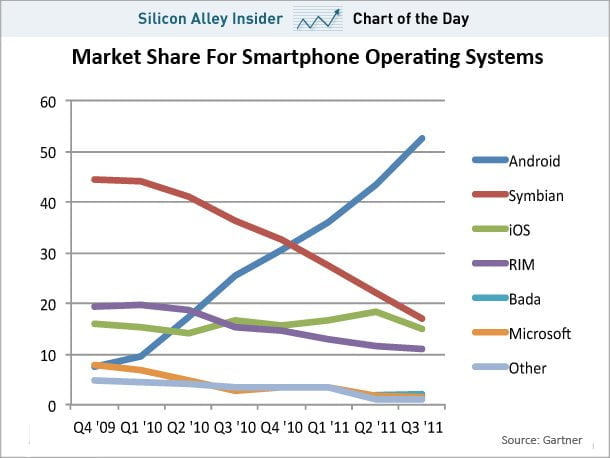 Android now has 52.5% of the global smartphone market. No matter how you want to slice it, that’s amazing. It’s stealing share from every other smartphone operating system other than iOS, which is basically flat.

Which begs the question, when you look for your next phone – why would you look at anything except Android?

I’m a full-on Windows user. Not because I think it’s particularly brilliant, but just because – for me – it works. We use it in the lab, I use it at home, my friends use it and my family use it.
And yes, occasionally there are flaws and stuff, but (literally) 99.9% of the time, it works.
Which beats my car, my swimming pool pump and my burglar alarm – to name but a few.

Another reason that I use Windows rather than a Mac, is Mac users’ constant and nauseating insistence that I must use Mac products if I want to be a “real” computer user. And yes, perhaps if I was a silver Loerie-winning, arty-farty Ad Wizard or a graphic designer or something, then maybe it would suit me to use a Mac. But I’m not, and it doesn’t.
So why would I want to shell out 2½ times the money for a product that I don’t want and I don’t need? Because it looks nice? Because it will make me appear “trendy”? Big wow.

The Guardian’s Charlie Brooker knows exactly what I’m on about and sums up everything I want to say in the first two paragraphs of his piece on this issue – the rest is certainly worth a read as well.

I admit it: I’m a bigot. A hopeless bigot at that: I know my particular prejudice is absurd, but I just can’t control it. It’s Apple. I don’t like Apple products. And the better-designed and more ubiquitous they become, the more I dislike them. I blame the customers. Awful people. Awful. Stop showing me your iPhone. Stop stroking your Macbook. Stop telling me to get one.

And he’s right, because the only people that this issue really matters to is the Mac Fanboys. If it mattered to me, I’d do something about it. But it doesn’t, so I haven’t and I won’t.
When I’m at a braai enjoying a drink, I don’t expect someone to repeatedly badger me about my choice of beer; telling me how their imported-from-Tibet Lèopard du neige bèvèragè is made with water from Himalayan glaciers, which is then crystal-filtered through the Dalai Lama’s undergrunties. I like my Black Label – I don’t need your stupidly expensive alternative.

As Marcus Brigstocke quipped at the recent Edinburgh Festival:

To the people who’ve got iPhones: you just bought one, you didn’t invent it!

All of which makes tweets like this, comparing that gadget to the achievements of space travel and automotive vehicles, seem a little absurd. Because it’s just a mobile phone, with a dodgy camera, prone to occasionally exploding – even if it has that annoying little fruity symbol on it.

So Charlie Brooker is right. Microsoft Windows (in whatever guise) might not be the best product ever created, but it generally does what it is supposed to do and it generally does it very well.
Is Mac better? Maybe for you Mac Fanboys.

But then, as Brooker says: “I don’t care if you’re right. I just want you to die.”