I know, I know. You had other plans for this evening anyway. Me too: I’ve been told that there might be something history related on the History Channel. Granted, this was by the same person who suggested that there would be some music on MTV last week, but it’s got to be worth staying in, just to witness what would be an… er… historic event.

And if you were wondering how you’d even get there in the first place, you should remember that there is a scheduled flight service from Cape Town to Novolazarevskaya Station, so it’s not as hard as you might imagine.
But lousy TV and ease of access to available flights aside, you still shouldn’t go to Antarctica, because tourism is destroying the place. And that’s a bad thing.

Scientists say walking on moss beds will leave footprints that could last for centuries.

Fortunately, this important news is now being shared, thanks to a new commercial from John Oliver’s Last Week Tonight:

Not quite sure that green oval at the end works so well, given that it completely misses including the widely-suggested alternative destination, but at least the primary the message is quite clear.

On an altogether more serious, certainly more edgy and somewhat longer note, his hugely interesting piece on the US Wealth Gap is sublime.

It was an emotional time for family 6000 yesterday afternoon, as we said goodbye to Grandma and Granddad, who were (well, are, actually) flying back to the UK via Dubai. Checking on their check in though, I spotted this: 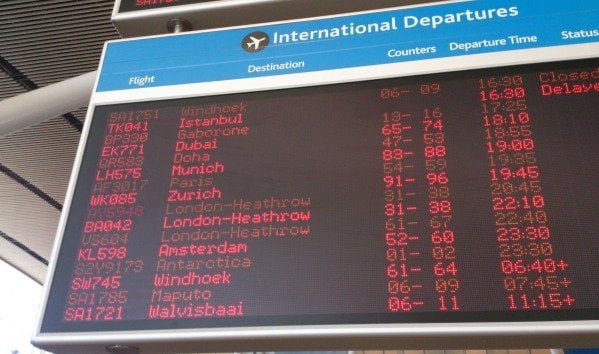 Yes, at 2330 yesterday evening, you could get a flight from Cape Town to Amsterdam or… Antarctica.
Who knew?

Better make sure you get on the right plane to avoid confusion though:

Hey. Shomething ish not right. Why ish dare sho much shnow at Schipol?
Where are the buildingsh? And where did doze penguinsh come from?

The whole destination thing is a bit vague, and since the total area of Antarctica is 14,000,000km², you might find yourself some distance from the bit of Antarctica you actually want to be in, but on the plus side, at least you’re virtually guaranteed a daylight landing.