I was on a (landline) conference call the other day when my cellphone began to ring. I couldn’t take the call, so I rejected it with a message by clicking the “Reject call with message” button on my phone. It sent a message to the caller which read:

Sorry, I can’t take your call at the moment.

Which wasn’t actually very useful, since they already knew that I couldn’t take their call at the moment, as I hadn’t taken their call.

So I spent some of the rest of the conference call (the boring bit about costings for the new project) editing the pre-written messages* on my phone, so that I could be more helpful when rejecting calls with messages in the future. I could think of loads of useful, informative options, but there was only space for six messages so I had to be selective and choose the most important ones, each of which can now be selected and sent at the push of a single button. 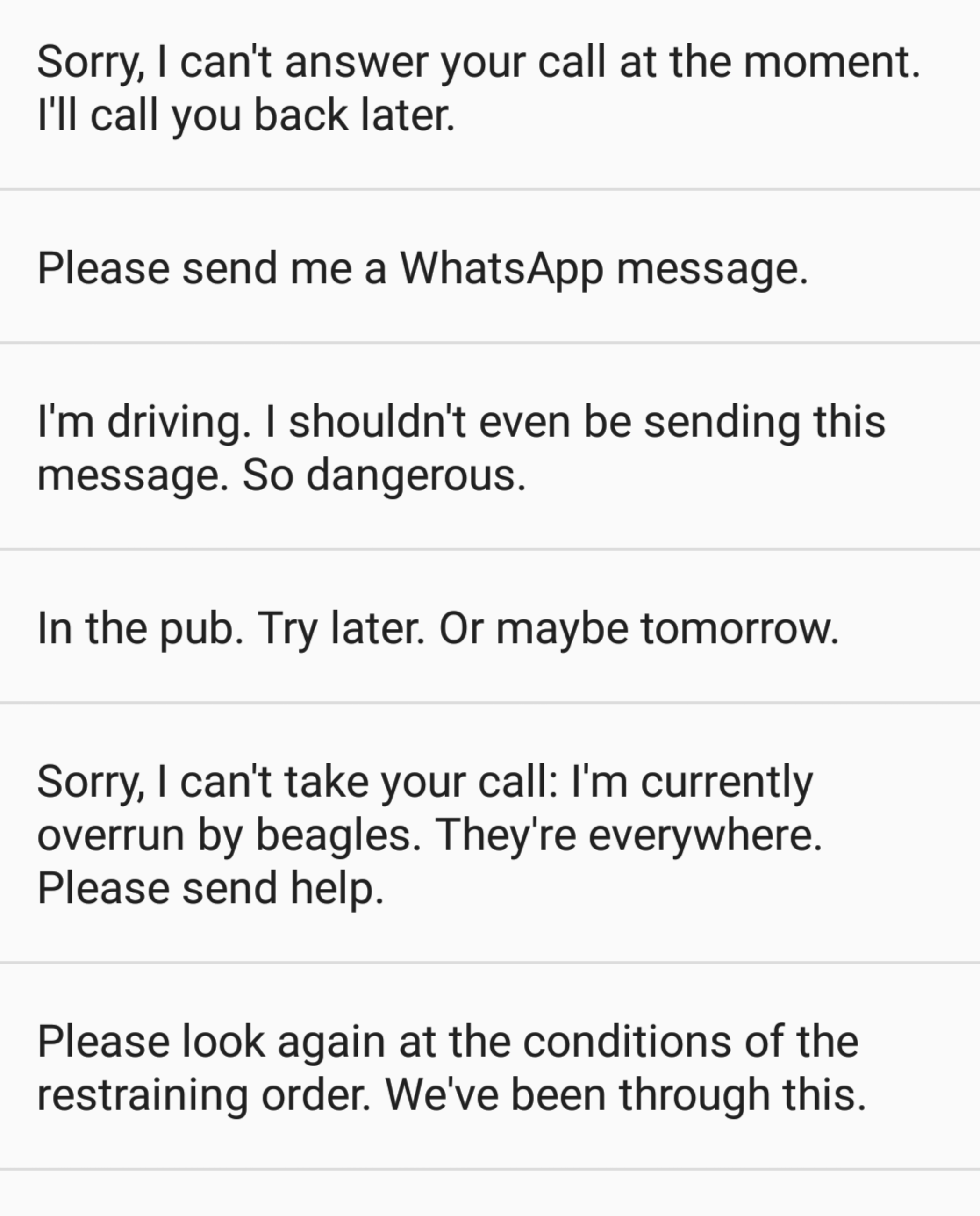 I’m hoping that these new, improved messages will give more clarity as to why I’m not answering people’s calls in the future. I can think of several occasions where I would have used each of these over the past fortnight alone. Especially the one about the beagles [involuntary shudder].

Not the canoe boat thing. No, I’m talking about the website and especially the app.

Kayak isn’t new. Even I have been using it for years. I don’t travel overseas often, but when I do, it’s indispensable and thus, it remains one of my favourite apps.

So why Kayak? Because its biggest strength is that it is particularly brilliant at compiling your itinerary, and it has a genius way of doing it. Each time you get a confirmation email from your airline, your car hire place, your ferry, your hotel or your train company (or whatever), simply forward it to kayak and they put everything together in a handy little virtual pack for you.
You can see the bare bones of this at a glance (flight numbers, times etc) and then with a single click, you can get the detail (seat numbers etc). It even stores the original email for you to refer back to if you need to.
Oh – and you can share the itinerary, either as a read-only or a collaborative editable file.

So simple. So brilliant.

One last thing – a really nice touch on the latest update is the app background changing to a photo of your destination. Suddenly, I’ve got Tinsley Viaduct and those infamous cooling towers on my phone and it’s piquing my excitement to head to the frozen North.

Here’s a really easy way of getting all the fixtures for Brazil 2014 into your Google Calendar – get someone else to do it for you! Fortunately, there are nice people out there who have put the whole tournament into Google Calendar format and so all you have to do is to go to the site in question and click one little button.

DON’T WORRY if the times seem wrong (for example, that top link initially displays them in BST (London) time).
When you import them into your calendar, they will magically transmogrify into your local time zone (or whatever time zone you choose to have your calendar set for).

SwiftKey is a fast, intuitive way to input text onto your smartphone and, for me, just pips Swype when learning what I want to say and how I want to say it.
However, the one issue with SwiftKey has always been that while it’s good, it’s also not free. Sure, it’s only $4, but given that there are decent alternatives out there, gratis, it’s some indication of its power and usability that people go out (or stay home – this is online stuff, after all) and choose buy it.

But from now on, SwiftKey is going to be free.
Why? Because (according to its inventors):

We’ve come an incredibly long way these past six years, from two university friends with an ambitious idea, to becoming the global best-selling app on Google Play the past two years running. We founded SwiftKey to make it easier for everyone to create and communicate on their mobile devices, and as a company we’re working hard to reach that goal.

This is why today we are making SwiftKey free. We believe this change is the best way to achieve our global vision for SwiftKey, as we can now reach many more people around the world without price as a barrier.

Alternatively, of course, it could be that:

…in SwiftKey’s case, it [could] help it in going head-to-head with similar, free technology that Apple will soon offer to iPhone users.

But I think it’s more likely that they just want the people of the world to talk to one another, right?

All of us who have previously paid for the app got this email:

To say thanks for your support as a paid SwiftKey user, we’re giving you a ‘Premier Pack’ of 10 new premium themes worth $4.99 for free!

Yeah, whatevs, themes-schmemes, but it’s a decent gesture, I guess. Note that I was happy to pay $4 just to be able to use the app, so I’m not really put out by this.

SwiftKey is cool, and now it’s free, so go and get it on Play Store.

Note: This post is mainly aimed at Android users, but obviously the podcasts suggested are available across all platforms.

With the surprise departure of Gareth Cliff from the 5fm Breakfast Show, you’ll have been hoping to find something nearly as good to occupy your morning drive to work. Sadly, until their “relaunch” at 5am on the fifth of the fifth (read: “We weren’t ready for this. At all.”) you’re certainly not going to get it, as Grant Nash, one eighth of the much-loved Grant and Anele duo* “fills in” for Cliff and the team.

I’ve decided to try podcasts, given that the other radio options are rather limited in desirability. And I should mention that we’re in SA here, where digital and satellite radio are as likely to be seen in the next few years as that hoverboard from Back to the Future. In addition, we’re still battling with the joint foes of slow internet and high data costs, which means that, for many people, streaming – especially on mobile – is a non-starter.

Podcasts are things that I have previously pretty much ignored, but Gareth’s departure and Grant’s arrival twixt six and nine have pushed me to explore a bit. And it’s not (quite) as daunting as I had imagined.
Basically, all you need is a podcast manager app and a willingness to explore a bit.

For the former, I chose Podcast Addict [QR code], simply because it had the best reviews on the Play Store and I’ve already found that it’s pretty easy and intuitive to use. Also, it’s ad-driven, so it’s free (although if you find that you are going to be using it full-time, you can chuck R30 at the developer to lose the ads).
Next, I had to decide which podcasts to try. This is obviously a very personal thing, but the internet can help with some starting points: here, here and here, for example. I looked at some comedy, some topical stuff and some educayshonel things. It’s worth noting that the BBC has a HUGE repository of podcasts on just about every subject. The only downside is that almost everything involving music can only be downloaded in the UK, because of copyright laws. And yes, I’m well aware that there are ways around this, but that’s your indaba, innit.

Something else I found were video podcasts. Hundreds of them. This might not suit though, because a) bandwidth and b) driving. However, if you have unlimited data and/or cash and you’re brave enough to take public transport, this could be for you. At two hours from Kenilworth to the Waterfront, God knows you’ll have the time to watch them. It’s worth noting that PodcastAddict’s search feature allows you to choose to look for audio, video or both. Typically, you’re looking at about 1MB per minute for most of the audio podcasts I’ve seen, so it’s “doable”.

So, what did I end up starting with? Here’s my list:

Frank Skinner on Absolute Radio
Alex Horne Breaks The News
Huw Stephens on BBC Radio 1 (unsigned artists and DIY labels = no copyright issues)
Justin Moorhouse About 30 Minutes, No More Than 45 and
A History of Britain In Numbers

I also tried Stuff You Should Know, but I thought that it was a bit rubbish.

Early days, sure, but I’ve enjoyed my journeys with my podcasts and I really don’t feel that I’m missing out on much given the live alternatives available. I’ll keep you informed and updated on how things are going.

Meanwhile, if you have any thoughts on this subject or have any podcasts that you want to suggest, then please let me know in the comments below.

* approximate calculation based on BMI.