It’s holiday time in the Western Cape on Monday, at least according to the ANC Youth League.

“We are officially declaring Monday a holiday for Western Cape’s citizens. No work as we make this city ungovernable. No taxis will be in operation; those who will be on the road will be transporting people to the march… for free” said the league’s provincial chairman, Khaya Yozi.

Now, whether you agree with Yozi’s plan or not, I think we can all something learn from his announcement.

It seems to me that there should be less working and more holidays on Mondays. Coming from the UK, I’m used to having public holidays on Mondays – the holidays for May Day, Whitsuntide and August Bank Holiday always fall on a Monday, making for lovely long weekends in the rain. Compare that with a normal Monday in SA, where you’ll find us all slaving away inside while the sun beams down outside.

But not on this coming Monday, obviously. Because this coming Monday is a holiday. I think that Yozi has missed a trick by arranging to meet at Salt River Station – on the edge of Cape Town’s fetid industrial heartland – and not at the beach. I will probably try out that latter option and then get back to him to compare notes on how much fun we had.

Additionally, should my Monday plan go well, I will be declaring Monday September 3rd a holiday as well. But we’ll definitely meet at the beach. In fact, as summer approaches, I foresee myself declaring a whole lot more public holidays. Especially on Mondays.

Have a wonderful long weekend and I hope that you can all find something profitable and enjoyable to do with your free time, such as stoning vehicles on the freeways and causing R13,000,000 of damage to public property. 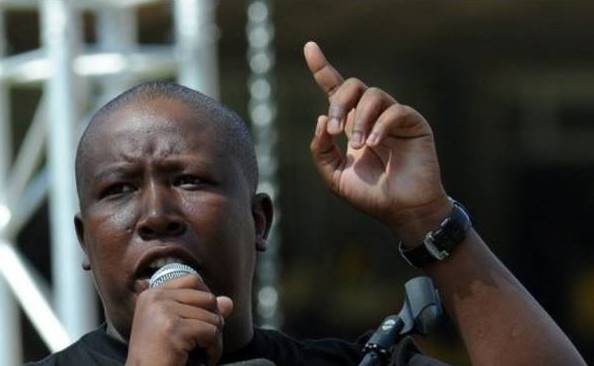 I remarked the other day that recently, SA politics has become depressingly depressing. Far too much foolishness and sabre-rattling from individuals elected to serve the population. Far too much emphasis on race and racism, sex and sexism, this-ism and that-ism. Far too much jumping to conclusions.
Far too little actually sitting down, talking to each other and sorting things out.
Three of the four news stories on the front page of the Cape Times today are based around an -ism of some sort. It’s depressing.
The other one is about plans for toll roads on the N1 and N2, which is equally depressing.

But why wouldn’t the South African population sling insults around at each other the whole time when those individuals who are elected to positions of responsibility are at it the whole time as well? Honestly, it’s like little kids in a playground, but with real and damaging implications for the country. Like I said, depressing.

And yes, I cc’d Helen Zille on a tweet about this, which I found on a Port Elizabeth DA Councillor‘s timeline: 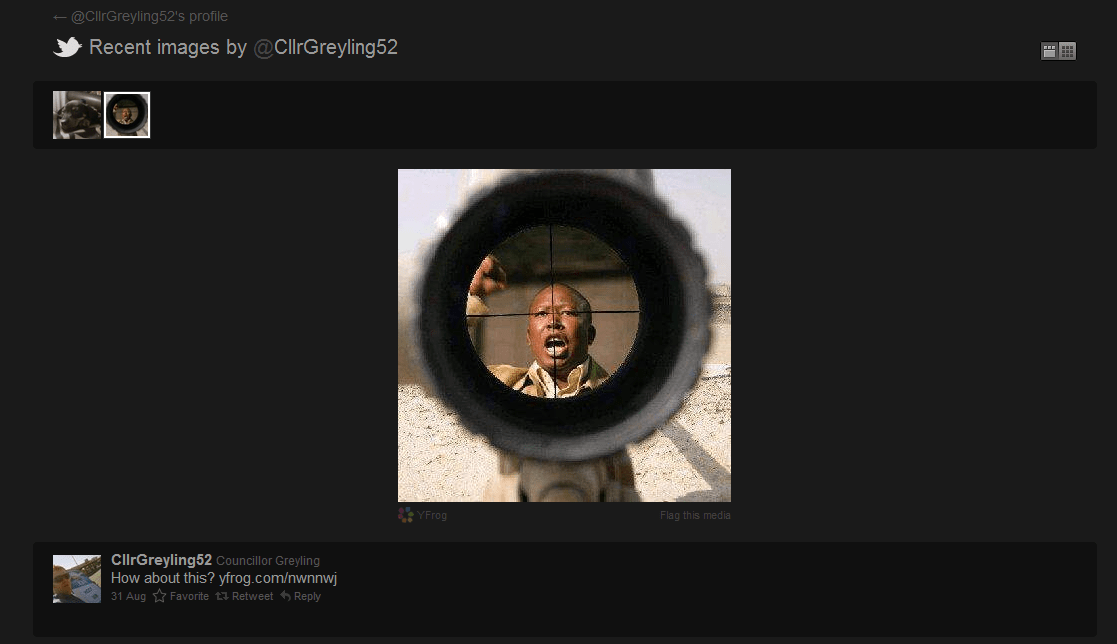 and it now seems to have disappeared rather rapidly. Which is nice.
UPDATE: Nope – must have been a welcome temporary glitch – it’s still there.

Cue the liberals telling me that after the Malema “Shoot The Boer” verdict, “it’s a slippery slope” and that freedom of expression is being eroded. I feel that they are missing the point.

And that point is this. In my humble opinion, those individuals elected (by whoever) to positions of responsibility, should be act responsibly. Is “Shoot the Boer” really hate speech? Does the image above, captioned “How about this?” amount to incitement to violence? Or should we be asking different questions, like: What does it achieve when role models sing Dubul’ iBunu? How does it help when elected officials put images of prominent and controversial figures in a sniper’s crosshairs into the public space?
And yet these individuals make a conscious decision to do these things. Why? Where is the value in that?

It’s more than just the lack of any positive worth in these actions that depresses me. It’s the fact that these things are divisive and harmful and yet they are completely avoidable. Julius Malema, Councillor Greyling et al simply need to make better decisions.
So, rather allow Malema to sing Dubul’ iBunu and then rejoice when he chooses not to. Don’t stop Mr Greyling publishing dubious pictures on his public twitter stream, be happy when he thinks first and rather sticks the image in his trash can.

Hey! It’s ok.
I do recognise that these are just Utopian pipe dreams. I do understand that it’s not going to happen.

But rather than taking pot shots at each other across the great divide, why not just think before you act? Why not just be big enough to put aside emotions, sit down and talk?
My 5 year old son is getting good at doing these things.
Is it really too much to expect politicians to do it as well?

Have you read Fikile Mbalula’s speech from the Economic Freedom in our Lifetime lecture last night?

If not, why not? You are lagging behind. Do try to keep up.

Speaking on the subject of the (proposed?) nationalisation of the mining industry and, in this excerpt, specifically on those who are against such a plan, he said:

These questions are of pivotal importance because if the entire mass democratic movement fails in its conviction to see a symbiotic link between the two slogans in this era of the National Democratic Revolution, and rather settle for isolating one at the expense of the other, this will, to my mind, be equal to an intellectual and ideological disservice on the side of the movement as a whole.

However, we are fully aware of a tendency that attempted to dislodge the content of the National Democratic Revolution by among other things, dismissing race as less important a social category in contemplating any social progress.

At the same time, we were aware of the ultra-leftist tendencies that were aimed at uplifting pseudo-Marxist predispositions at the expense of the revolutionary recognition of the symbiotic link between national liberation and social emancipation; born out of the acknowledgement of the inter-play between the national oppression and class exploitation; in the context of the National Democratic Revolution.

Yeah. What he said. You’d better believe it.
And extra points for getting the all important “tendency” in there.

Basically, for those of you at the back, I think that he’s having a bit of a pop at Blade Nzimande – “that bloke from the SA Communist Party”  – who, as we’ve seen before, isn’t adverse to a little bit of hyperverbosity (aimed right back at Fikile’s chums) himself.

It seems that when it comes to insulting one’s allies through the means of speeches or statements filled with ridiculously extreme,  hyphen-laden, politically-related adjectives, the members of the tripartite alliance have got it sorted.

Comrades! Re-elect me and together, we will ride invisible motorbikes!